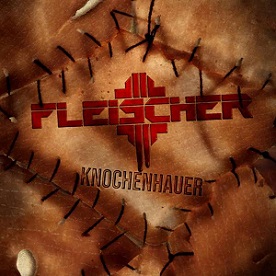 A new entry in the vast, welcoming genre of “extremities” occurred recently in Germany. Fleischer, formed in 2017 by Wolfgang Rayk (vocals), Mirko “Invitro” Lipke (guitars), Normen Cznottka (bass) and Joe Müller (drums), released their debut, “Knochenhauer”, via Massacre Records, narrating -according to the press release- stories that no one wants to talk about. Fleischer are addressed to the German audience, since their lyrics are exclusively in their native language, but even a short translation effort will help you deduce that they deal with perversion and brutality; that’s what they want to communicate to their listeners, without equivocations. In accordance with the bluntly brutal lyrical themes, the band plays a modern style of death/thrash metal, clearly influenced by the American scene; that means a straight, heavy and solid sound, full of rawness and aggression. Fleischer’s belligerence is properly emphasized by “The Boogie Pack” team’s approach in production duties, making everything crystal-clear, as the prerequisites of the modern sound dictate. Indeed, from the first seconds of “Spielgefährte”, your ears are filled with Fleischer’s concrete heaviness, till the end. Despite its attitude, “Knochenhauer” is by no means storming. Fleischer composed mainly mid paced songs, but they reveal a tendency for up-tempo rhythms in the second part. Among all this contemporary death/thrash, Fleischer try to sound somehow diverse, embedding more melodically “mainstream” themes into “Der Schneider” and “Vater”. They intentions for variance are evident, but certain parts remain dull and “flat”, indicating that more effort should be made (even heaviness needs proper manipulation). Of course, vocals might deter many English-speaking people, who are not accustomed to the “idiosyncrasy” of the German pronunciation, from engaging in the album. However, I consider that language -besides music- is another contributing factor to the brutality of the album, since German sound per definition more “brutal” (or “heavier”, to put it more correctly) than many languages (even the German expression of “I love you” sounds like you are cursing someone). “Knochenhauer” lasts less than half an hour; this is a bonus mark, given that there aren’t many worth-mentioning things happening regarding music. It excels in aggression, unleashing plentifully energy and dynamism during its short duration, thus constituting a decent starting point for the band, but I doubt for the longevity of its impact due to its “flatness”. Nevertheless, you should give it a try and experience Fleischer’s raw power if you are a fan of vulgar/violent concepts.