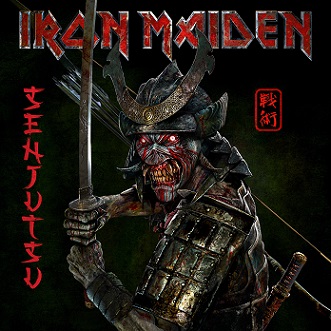 When a big band releases a new album, I usually don’t hurry and try to examine this album. Because these great bands have built the heavy metal construction and such albums have shaped heavy metal. In the case of “Senjutsu”, the new album of Iron Maiden, I did exactly the same thing. I tried to “live” the album and let it “grow” inside me. Every time Iron Maiden release something new, I think it’s a classic heavy metal celebration. And “Senjutsu” didn’t take too long to prove a huge reward for me. This new Maiden album is a masterpiece, an enormous artistic success of the legendary band. Before I explain my thoughts, I should notice that I didn’t like the last two-three studio albums of Iron Maiden – uninspired, tiring compositions, from a sparkles band, with a bad production and a vocalist who has almost lost his voice. However, “Senjutsu” comes to us as a surprise, since this new Iron Maiden album is the result of phenomenal inspiration, containing super-interesting songs, from a band who returns fresher, with a nice production and a Bruce Dickinson who has adapted his way of singing to his current abilities. The ten new songs, with a total duration of almost 82 minutes, are long, heavy, epic, progressive and complex tunes, in the typical style of the British band. Don’t wait, you won’t get fast, powerful and energetic tracks, only adventurous heavy metal music, which will take you on a unique, mysterious and mesmerizing journey to beautiful metal soundscapes. Steve Harris’ 70s progressive rock influences contributed to the development of the sound of “Senjutsu”, which will appeal to everyone who likes the epic/prog side of Iron Maiden. In these epics, Iron Maiden showcases all its trademarks, for example the amazing riffs, the incredible harmonies, the twin guitars, the overwhelming guitar solos, the melodic hooks, the catchy vocal lines, the heavy bass guitar sound, even the nice atmosphere of the keyboards! Yes, that’s Iron Maiden, this is the glorious signature of a legendary band! But let’s see the songs one by one! The title track is a heavy, monstrous composition, which will drive you crazy with its fantastic, crawling tempo and the ravenous guitar riffs and solos. “Stratego” is a simpler, yet heavy song - its galloping sound, its guitar work and celestial refrain will enthuse every Iron Maiden fan. “The Writing on the Wall” is the album’s first single and of course, it is a surprise, since country/blues elements have been merged to the band’s heavy metal sound. I love the refrain and the vigorous rhythm – I am sure it will be a fan favorite. Then “Lost in a Lost World” comes and steals the show! We are talking about an instant classic, a composition Iron Maiden should be proud of, an anthem only Iron Maiden can compose! The album continues with “Days of Future Past”, a song, which manages to leave us speechless in just four minutes! “The Time Machine” is another Iron Maiden epic, another great song with top performances and compelling melodic lines. “The Darkest Hour” needs your attention, but it will soon show you its strange beauty – that’s a clever song, which has become one of my favorites off “Senjutsu”. The album ends with three superb Maiden compositions, "Death of the Celts’, “The Parchment” and “Hell on Earth”. These Maiden rhapsodies combine all the characteristics of the band, all its attractions and advantages, and are beyond beautiful. These Maiden elegies keep Iron Maiden on the throne of heavy metal! … In a nutshell, the new Iron Maiden album kills with power and grace! It is another victory, another triumph of Iron Maiden, who offer us a multi-layered, multidimensional and truly epic, ethereal and lyrical album. Hats off!

In recent years, Iron Maiden have gone through a remarkable creative renaissance and unique process. A more ambitious, melodic and dynamic album is brought by the band, it is called “Senjutsu” and it’s their second double album. Steve Harris is still the main writer and longtime partner Kevin “Caveman” Shirley was responsible for its production. But what makes this album so mysterious, since it was kept in secret for so long until its release? Let’s dive in: the title track opens with a tribal drum that gives the sound of a tempo rocker. Hear the sound of the drums, it feels like an army is heading towards you! Very well executed, Nicko! We also have perfect rhythm guitar chords, played by Adrian Smith. Bruce Dickinson’s voice here is slow, but perfect - it’s not an easy track to hear for the first time. You have to listen to it several times, but as you dive in, you’ll like it! “Stratego” is more like a strategy. One of the shorter and simpler tracks of the record, turns out to be quite nice, with a galloping intro, a very catchy chorus, pleasant keyboards, played by Steve, and an awesome solo by Janick Gers. “The Writing on the Wall” has a western feeling and that’s what stands out. Another awesome chorus and solo, it is a Bruce–Adrian product. High hopes for this song live, to see the guitar solos and drums, being performed. “Lost in a Lost World” starts with a clean and acoustic line, some vocals reminiscent of Pink Floyd, and afterwards, it comes back to 2021. It’s the longest track of the album, its vocals at the end make it melancholic and yet beautiful. The interaction between the bass, the guitars and the drums bear similarities to the structure of “Infinite Dreams,” and that is not a bad thing. “Days of Future Past” is very ‘80s and what Iron Maiden got us used to. Nice guitar work, very sharpy! Listen to Adrian’s solos, followed by Bruce’s voice and you’ll see why. Nice work from Nicko, his drums sound and have a different flow, followed by the keyboards! The first disc finishes with “The Time Machine”, which has a different voice structure, more proggy, and unusual guitar riffs. The second CD starts with “Darkest Hour”, which opens with a clean guitar. Bruce sings about Battle of Britain and the Blitz of 1940. A rare ballad from the minds of Dickinson/Smith, a ballad about honor and duty. “Death of the Celts” has the best melodies the listener will listen to in this album, an astonishing bass line by Steve Harris and a different tempo in Bruce’s voice. All these make this song so unique. “The Parchment” starts with Steve Harris’ bass and then the guitars kick in. The verses and chorus tell a great story, alongside the instrumental section. It has the best climax of the album. Go hear for yourselves! Last, “Hell On Earth” ... A long intro! But yet, it has a beautiful melody, lyrics and vocals. The song reprises the clean and calm introduction, which eventually fades into the album’s end. Now we understand why the album was kept in secret for so long: it’s a great piece of art, that only Iron Maiden can deliver for fans and have a fine taste. We can’t wait to hear the songs live! IRONS UP, TROOPERS!