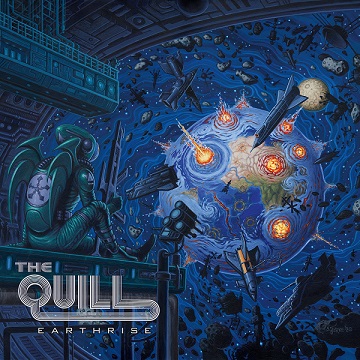 The band from Mönsterås in Småland, in the south east coast of Sweden, comes back in full throttle with a great album, “Earthrise”. It’s been four years since its predecessor “Born from Fire” marked their return and the return as well of their original singer Magnus Ekwall, a fact that made happy their fans. “Earthrise” marks their ninth LP and is another perfect example of their heavy rock career throughout all these years since almost the mid-90s. Be no mistaken. The Quill might be considered veterans already; however, they can deliver fresh and inspired tunes, which makes this record a 70s heavy rock/blues oriented one but on the other hand it sounds very contemporary. The charismatic voice of Magnus Ekwall is again on the spotlight, as his trademark singing makes this album a really special one. The choruses, the mid-range parts, the tension and color of his voice is so unique and characteristic that makes “Earthrise” so much exciting and interesting. Personally, I am so delighted since he came back to the band, because he gave back this unique identity to this band, something together with what the rest of his bandmates bring on and contribute, makes The Quill a distinguished heavy rock Swedish group. Speaking about the other bandmates, there is a fantastic work done in the rhythm section by Roger Nilsson and Jolle Atlagic. They are the core bonding of the whole thing, and in this record, they are amazing, proving one more time, of what they are capable of. The band’s sound is massive, solid and ‘grand’ as I like to say, and this is their success of so many years working together and combining their talent and unique characteristics. The guitar by Christian Carlsson has this beautiful balance between heavy rock, stoner metal and blues, enriching the album, making it more interesting, colorful and multi-dimensional. He has done a remarkable work in the solos, in rhythm guitaring and overall, his sound reminds me a lot of albums like “Silver Haze”, a personal favorite. “Earthrise” has a lot of influences and brings us references to Black Sabbath, Led Zeppelin (with beautiful acoustic/electro acoustic guitars by Christian in e.g. “Dead River”) and Uriah Heep, all contributing harmoniously within the band’s own style and sound. There are a bit heavier tracks, like “Left Brain Blues” or “Earthrise” and “Evil Omen”, but the album is very diverse, including “The Zone”, “Dwarf Planet” and “Dead River”. What I really enjoy is the fantastic overall groove that the record has, combined with beautiful melodies, choruses and bluesy feeling, making it at the same time retro and modern, having this excellent balance in the ears of the listener. This is a really lovely album which will absolutely fulfill and satisfy their old fan base, but it is a fantastic opportunity to be listened and appreciated as well by people who have not yet been familiar with the band’s discography and are eager to start exploring their tunes.