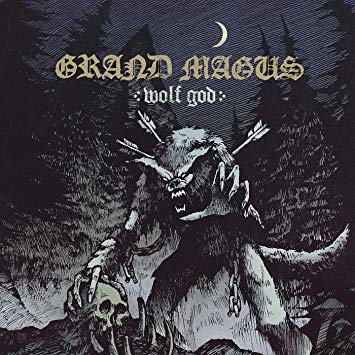 Discovering Grand Magus, in my case, did not, unfortunately, come up since day one (aka November 2001), or, since their first  -self titled- full-length record. Despite that fact, I absolutely loved their early records, considering the first one my favorite, which will not be matched to my humble opinion. That heavy rock, Sabbath-related feeling is difficult to be re-discovered even by J-B and Fox nowadays. Throughout those years, the band has chosen a more traditional heavy metal path, with distinctive elements on their trademark sound. It’s April 2019, and the mighty “Wolf God” has settled in the heavy metal globe for good and is ready to bite, bite for good.

The album makes an epic entrance with the instrumental Gold and Glory”, which could be easily a movie theme of a classic – epic movie, with an emotional tone, getting us into the mood. Then, “Wolf God” takes, a track which could make Manowar be proud of their legacy and the mark they have left to so many bands. You feel the galloping groove, the fast riffing (J-B might not be a guitar hero/god, but he manages pretty well on the 6 string Flying Vs) sets the pace and the wolf howling towards the end of the track marks the presence of the Dalarna (a region in Sweden, where J-B and Fox come from) Wolf, ready to conquer the battlefield. “A Hall Clad in Gold” fastens the pace a bit on the into, then slows down on J-B’s lyrics and then again Ludwig plays faster. What is magnificent on this record and contributes to the overall more ‘natural’, ‘organic’ feeling of the record, is the way all instruments have been recorded. As stated in a recent interview by the band’s frontman, this time was different for Magus, because they recorded everything ‘live on studio’, and especially you get this difference on the drums, which sound massive and awesome! Bra jobbat Ludde 😊

“Brother of the Storm” is a mid-tempo jewel of the album and has such a groovy chorus, with a solid rhythm section. The epic feeling is highlighted with “Dawn of Fire”, reminding us a lot of “Triumph and Power”, keeping the standards high. “Spear Thrower” has an -into your face- catchy attitude, and is epic to the bone. Guitar soloing is remarkable, because, as we said before, J-B plays the guitar in no fancy or virtuoso way, however, all the riff essence and feeling is there, so no doubt regarding that. “To Live and Die in Solitude” reminds us of the major factor why Magus are such a special case in modern heavy metal reality, J-B’s charismatic and gifted voice, which underlines every second of Grand Magus song throughout their career. He is so unique on that and there is never a moment to doubt his ability to deliver. To deliver in an epic, solid and muscular way, his way. “Glory to the Brave” starts in a moody way, with Fox’s bass line, along with Ludde’s touch on drums and J-B’s fierce riffs, is really a tribute to the Viking warriors, a heroic hymn to stay in the years to come. Accept, Judas Priest, Manowar, Dio, Rainbow are some of the most distinctive influences bursting on another Magus release, but filtered and altogether ‘sieved’ through the band’s epic, Viking themes, like on “He sent them All to Hell”. This particular track has also an AC/DC oriented tempo, differentiating it a little bit from the rest and adding to the influences mentioned before.  “Untamed” is the song where this natural, organic sound of all instruments (especially on the intro of the drums) really makes the difference and elevates the quality of this epic Heavy Metal record. The perfect closure to a heavy, glorious and ‘untamed’ Wolf-God, who is fierceful and hungry to conquer all.

With no actual need to re-invent the wheel, experiment or re-discover what has already been discovered, Grand Magus deliver us an honest, coming straight from their hearts and epic record. An album which glorifies their Viking heritage, underlines their status as a great heavy metal band of our era and sets aside their superb past where of course they have built on to become a true, bold and prevailing band.

Beware of the Wolf. The Wolf God.