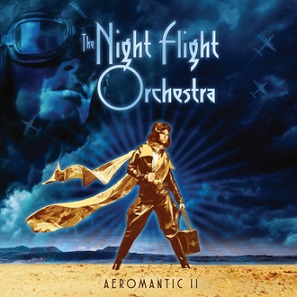 Every album from The Night Flight Orchestra is like entering a time capsule and be transferred in time, particularly during the first half of the 80s. All melodies, the keyboards, the riffs, the overall feeling point out towards this direction and help the listener travel back in time. ‘Aeromantic II’ is no exception. To the contrary. It is another fine example what these Swedes are capable of. And they do it in class. From the very first seconds of ‘Violent Indigo’ and the keyboards - straight from the 80s - you are part of that glorious and ‘anthemic’ era. John Lönnmyr has done a fantastic job and he has left his trademark on this album, in an emphatic manner. The whole instrumentation, the overall feeling, the riffs and leads of David Andersson really constitute a great album. An album which you can play it either on a beach bar with your strawberry mojito at hand, or driving on the highway for your weekend road trip, or having drinks with your friends in a bar talking about how your summer vacation was. Or, any of the album tracks could be the soundtrack of a lot of 80s movies, I could think a lot for example with ‘Chardonnay Nights’ or ‘I Will Try’, great songs, where Björn Strid and co. have perfectly mixed Phil Collins solo career, Toto, Journey and a little bit of mid 80s Genesis. Pure delight! And we are in 2021! I truly believe that the core of success for The Night Flight Orchestra and what really makes this band special and unique is this exact songwriting. How they blend all these elements together, how they bring the nostalgia back to the ears and hearts of their audience, how they give such class and eloquence on all their songs. I must admit that their first album “Internal Affairs” – although being a very nice album – it lacked this glamour, class and chic style they have developed ever since, record by record. ‘Aeromantic II’ establishes The Night Flight Orchestra on the top of the tops on this genre and the band is ready to take off on another adventure back in the future!