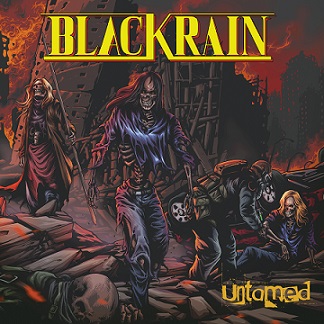 BlackRain isn’t a stranger, to the contrary, with six albums already in their discography and a new one, “Untamed”, just released, they are known in the European hard rock scene. This time the French band has collaborated with producer Hannes Braun, frontman of the German hard rockers Kissin` Dynamite, and the outcome of this co-operation is fantastic: BlackRain’s new work can be defined as a sleaze hard rock/melodic metal album, full of melodic hooks, based on fresh ideas, composed with wisdom and maturity, performed with passion and taste. Since I got “Untamed”, I am listening endlessly to it, without getting bored! With the direction of Braun, the talent and the vision of the four musicians, the seventh album of BlackRain is a real dynamite, a real thunder, a quality work, asskickin’ and relentless. Swan (vocals) and his bandmates gave their everything to make “Untamed” an interesting album – they succeeded and their fruitful effort shall be praised! The band’s hard rock sounds so nice, dirty and original, although you can understand various influences on its music character – the songs are versatile, for example the song “Demon” has a punk rock edge and “Blade of Love” is almost power metal! Fans of sleaze hard rock and melodic metal must listen to “Untamed” – the beast of BlackRain is out of the cage, roaring, ready to run free and hunt for its food! Beware the beast!