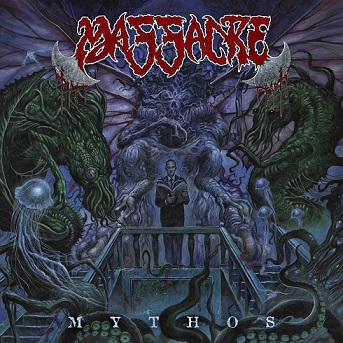 It seems that after their reappearance with the critically acclaimed “Resurgence” last year, death masters Massacre developed an appetite for creativity. Recently, the veterans from Tampa, Florida, released a new EP, titled “Mythos”, centered on -what else- H.P. Lovecraft’s horrific stories. Of course, there aren’t any misconceptions beforehand regarding the content; the moniker “Massacre” suffices. As you may have guessed, “Mythos” is a rotten offspring of “Resurgence”, offering fifteen minutes of Florida’s traditional death metal.

The exclusion of surprises of any kind shouldn’t deter you from investing your time in Massacre’s effort. Anyway, wise deathsters never regard the release of such a band as a possibility of coming across something new (this case, in mathematical terms, is like trying to divide a number by zero). As such, “Mythos” is Massacre’s essence. From the first seconds, your ears are filled with their familiar, cement-like sound; a sound so heavy and solid that (like in Asphyx’s case) you have the impression you can touch it.

The four songs of the EP are simply -but ideally- structured, bringing in mind the preceding album. However, the current stuff doesn’t have that pompous aura that emerged occasionally in “Resurgence”; it features mainly up-tempo ideas, without themes that should guide you to the borders of atmospheric horror. Traditional, violent, heavy riffing that raises adrenaline, cohesive rhythm section, aggressive, hellish drumming and Lee’s abyssal growls constitute a storming totality that will satisfy the eager-for-classic-sound fans.

The remarkable opener “Behind the Serpent’s Curse” (also available as a single) is a variant - and hence the most interesting- idea, combining Massacre’s fast-paced riffing attack with timely breakdowns, mid-tempo sections, and a successful growling dialogue between Kam Lee and Anders Odden (Cadaver), who participates as a guest. “The Dunwich Horror”, “The Mythos That Lovecraft Built” and “The Thing on the Doorstep” are more typical of Massacre’s unwillingness to slow down, where the constant hammering and flirt with rotten thrash unleash a significant dose of the band’s energy.

“Mythos” offers exactly what a dedicated deathster seeks; it may not impress to the extent that “Resurgence” did, but it doesn’t disappoint either. Its old school approach in lyrical and musical terms, hellish themes, exemplary production and -above all- sweeping energy will surely concern your sense of hearing. Essentially, Massacre declare profoundly that their purpose is to stay with us; let’s hope they won’t change their mind.