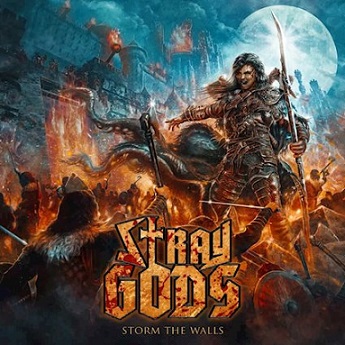 The Greek metal scene is getting stronger and is giving the world new bands and material. Stray Gods is one of those examples. A debut album isn’t an easy task, but they delivered in the best way possible. An excellent one! The highly acclaimed Greek heavy metal musician and producer Bob Katsionis, who has worked with the best bands and artists out there, such as Firewind, Outloud, Serious Black and Kamelot, presents us his new project! After writing a whole album, he had to find the perfect musicians. So, he did: Artur Almeida (vocals) from the Portuguese band, Attick Demons,  Gus Macricostas (bass) and Thanos Pappas (drums). “Storm The Walls” was released via ROAR! Rock of Angels Records, one of the most important labels on the heavy metal scene! It has eight tracks so, let’s talk about them!  The album starts with “The Seventh Day”, which reminds of Iron Maiden and its trademarks. Such an energetic beginning, with a kick ass guitar solo. What a better way to announce a new band and its debut record to the world! “Black Horses” follows up! A galloping, 80’s metal track that makes the listener go back in time and believe me, it’s worth it! Are you feeling alive for a night? You better be! “Alive For A Night” is next, a very fast paced song, with no time to breath or laugh ... This is the best one and will be great played live, structured on the guitar lines and double bassed on drums. The end is a killer, Artur has such lungs. “Silver Moon” is the fastest track on the record and has again an Iron Maiden vibe and influence. High speed and the guitars are in the ‘go fast or die’ mood - it could easily be a moshpit song ... “Naked In The Fire” has a mix of melodies and combines lots of tempos as well. “Love In The Dark” has a good vibe  ... you can tell by the title of the song! Who doesn’t like that? It is a very passionate ballad that reminds of German bands, such as Scorpions. If you have the chance to go to a concert of Stray Gods, make sure to bring a lighter and rise it up! Spoken words open for the title track, “Storm The Walls”, the longest song of the record - pure epicness! It’s a fighting song, with a fast beat on the drums, the guitars creating the atmosphere of a storm and a majestic mid tempo stroll. This album was quite a surprise, Maiden-esque, well written both lyrically and musically. Everyone should listen to it!