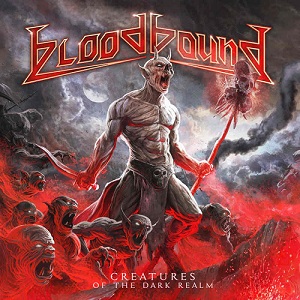 When Swedish power metal band Bloodbound showed up, with its first album “Nosferatu” (2005), no one could expect what would come for this band. They are well-known for incorporating symphonic and power metal elements all together. The three main songwriters, keyboardist Fredrik Bergh, guitarist Tomas Olsson and vocalist Patrik Selleby, have written now a fresh and powerful record, that is more melodic, more catchy, more infectious, more everything!!! And “Creatures of the Dark Realm” is what you’ll expect! The album opens with “The Creatures Prelude”, a song that summarizes what the singer will listen throughout the twelve tracks. “Creatures Of The Dark Realm”, the title track, sails with a powerful melodic metal song, with strong riffs, played by Tomas Olsson and Henrik Olsson. It reminds us of the worlds of Avantasia, Sabaton and Theocracy, especially thanks to the keyboards played by Fredrik Bergh. The synthesizer is what makes this song so powerful and great and makes the listener wanting to play “air synthesizer”. The power metal feeling grows in “When Fate Is Calling”. No wonder why it was chosen as the first single. Once again, Fredrik’s keyboards will rise again and the guitar solo kicks ass. Bloodbound return with treir heavy metal roots, in “Ever Burning Flame”, with fast guitars and blast beat drumming, played by Daniel Sjögren. Very nice, and a strong chorus as well! If you want a hard track, then “Eyes Come Alive” is for you! This one is the fastest and you can see Patrik going fully Rob Halford, in some verses, like “Painkiller”. And it captures Sabaton’s spirit too, musically speaking. “Death Will Lead The Way” is a glorious, epic song, with a style that is so powerful, that can produce another genre that was never writter or played. “Gathering Of Souls” reminds us of Theocracy and has an Avantasia vibe. It clearly has a superb chorus, to sing a long. Well done, guys! Maybe you were expecting a fast track, due to the drums that open “Kill Or Be Killed”. Well, forget it! It opens like a folk and pirate intro. If you listen very closely, it has that vibe, specially Patrik’s voice and Anders Broman’s bass. What make this song so catchy, are the guitars. So, raise your glasses with beer and rum and sing along! If you like a fully power metal song that has it all,  “The Gargoyles Gate” has it all!!! Joakim Brodén is that you? If not, the similarities are remarkable. Listen to “March Into War” and you’ll understand why. It has a Sabaton vibe. “Face Of Evil” has a classic melodic 80’s vibe. And finally, “The Wicked And The Weak” closes the album with much energy, like a song should be. All songs will excite the listeners’ mind. It sure is a good addition to a collector’s collection, specially a power metal one. A must have!