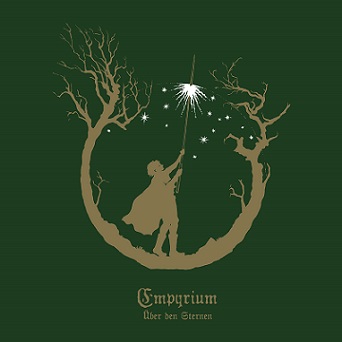 This band is finally back with “Über den Sternen” (translated as ‘Above The Stars’). The German duo has returned, after “The Mill”, released in 2015, a beautiful and strong EP. But this one is as beautiful and strong as is successor. Markus Stock (acoustic and electric guitars, vocals, drums, bass, keyboard, dulcimer) with the assistance of Thomas Helm (vocals, keyboard, acoustic guitars), have done quite a remarkable work. The album starts with “The Three Flames Sapphire”, which has Empyrium’s DNA on it. It begins with a soft and delicate melody of an acoustic guitar, followed by a lamenting cello, before an acoustic guitar in faster tempo and the folk, rhythmic drumming start. A religious - sounding choral then comes. Very beautiful flute is played. There’s even room for some growls, heavier material, nevertheless melancholic and folkloristic environment. “A Lucid Tower Beckons On The Hills Afar” opens with a distorted and heavy guitar riff, but the sound of a dulcimer gives a very interesting sound and its true identity. What makes it unique are the vocals and the guitars, that make it so simple, like a peaceful shore. You will find here quiet parts that will make feel like you are at the shores, looking at those waters and feeling the freedom. A slow tempo, undistorted guitars and drums that maintain that same tempo - that’s how “The Oaken Throne” starts. Rythm guitar chunks are added, alongside a second guitar. The tempo slightly increases, which indicates and draws reflective portions of the song finale. “Moonrise” has gentle, acoustic guitar riffs, followed by subtle keyboards. The acoustic guitar plays different riffs, that are very enchanting and melodic. “The Archer” has acoustic guitar and slow drumming. The vocals here are at a different register, which is quite nice. “The Wild Swans” begins with sounds, reminiscent of swans, like flutes, then distorted guitars are followed by growls. Very operatic and open throat vocals can be heard. Drum and more distorted synths are used, for a more aggressive context. Personally, my favorite track. The album finishes with the track of the same name as the album. “Über den Sternen” features a slow drum beat and heavy, distorted guitars. Very nice in every way and the German language makes it even better. It’s the longest track of the album. True to the romantic tradition of their roots, Empyrium transforms the myths, sacred sites and natural wonders of the Rhön Mountains into music, in a balance between soft and rugged, all mirrored in a sonorous expression that allows us to dig deep into the infinity of the imagination.