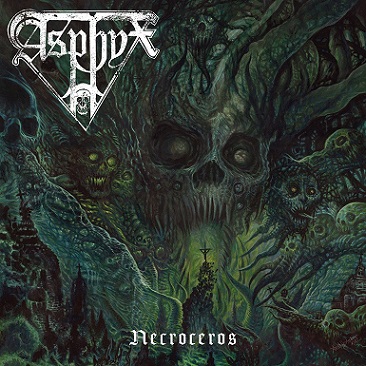 When I was assigned the task to review the new Asphyx album, I knew beforehand what I was going to write, since I knew what I was going to listen. Alas, I do not claim to have prophetic abilities. The band’s long-lasting, undisputed quality is where my certainty lies. You see, Asphyx are a benchmark in the European death metal scene, a landmark of brutality and grimness. Their crushing sound, either vehement death or devastating doom, became an inherent part of deathsters’ and doomsters’ perception alike. We grew up with Asphyx and they never disappointed us, maintaining their high-quality standards even after their reunion in 2007. Indeed, I regard their second era as equally brutal and sick as their classic albums of the early 90s.

The five years that passed since “Incoming Death” made us impatient for new staff from the band. Hence, the announcement for the upcoming release rang a bell in our subconscious. Eager minds flew directly to that robust rhythm section, that solid, crushing, concrete-like sound, that grim, claustrophobic atmosphere of war, torture and pain. Do not doubt and rejoice: “Necroceros” is based on the expected recipe of recent albums (regarding an overall orientation for decelerated speed), using these characteristics abundantly.

The band performs like a belligerent group, building tons of cement, hammering riffs. “Necroceros” confirms that the Dutch know how to compose songs with addictive death patterns, that remain to your subconscious as points of reference when playing with your air guitar. Their ability to crosscut different tempos within the same song (death/thrash explosions and slow parts), without losing their robustness is phenomenal: just observe the transitions in “The Sole Cure is Death” and “Mount Skull”. Death and doom coexist harmonically, forbidding escape. The traditional, ravaging, thrash-oriented attitude emerge occasionally, like in “Botox Implosion” and “The Nameless Elite”, where, under an unbiased perception, you may conclude you have heard these ideas repeatedly in the past. However, they are so well-crafted, properly structured within rhythmic-groovy patterns and delightful, that you cannot refrain yourself from repetitive hearings.

The band’s real power and true essence is hidden in doom; “Necroceros”, loyal to the Dutch’s principles, offers plentifully moments that draw your attention. Their themes are unbearably heavy and grim, penetrating and pounding your ears. But wait: an aura of renewal arises somewhere! “Three Years of Famine” starts as a conventional, ominous Asphyx song, but you are fooled: amidst the darkness and pessimism, an almost epic lead emerges that changes everything. The track becomes majestic and soul-stirring, bringing to the surface emotions that the band hasn’t given us in the past. Now, that shifting direction to more melodic patterns is easy for them.

All ten tracks of “Necroceros”, supported by proper production, have to offer something, forming an album that justifies expectations and satisfies most fans, without reaching the insanity of “Deathhammer” though. Payl Baayens, a worthy Daniels’ successor as a riffing machine, has a significant contribution, working hard on the band’s principles. As for Martin van Drunen, words are not enough. What can I say about this ageless dog, whose raw voice sounds the same after so many years?

The nightmarish closing with the homonymous 7-minute rotten, sluggish, desperate opus, that will surely claim a seat among the band’s classic doom songs, confirms the triumphant return of Asphyx to their prominent place. “Necroceros” has high orchestrating standards, revealing a band with experience and passion. It sounds familiar, looking undeniably to the past, yet some modernist strokes emerge. Asphyx still follow the path that they established long ago, adding a new melodic aura, which -of course- in no way does it tamper with their brutal self. “Necroceros” is a good addition to their catalog; pay some attention to it, in these difficult times.