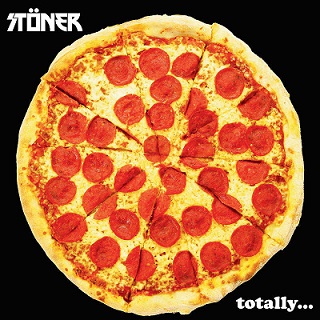 Every grain of the Californian sand that we’ve been fed up all these years, reminds subconsciously its creators. And when the creators themselves decide to cooperate and start a new project, just providing fuzzy lessons of freedom and coolness, we cannot stay untouched. Stöner, the new offspring of Brant Bjork (guitars, vocals), Nick Oliveri (bass, vocals) and Ryan Güt (drums, also a member of Bjork’s personal band) emerged as part of the Heavy Psych Sounds’ initiative in Mojave Desert, when five bands gathered and jammed in the middle of nowhere (search for “Live in The Mojave Desert Vol 1-5”).

Stöner’s debut (simply titled “Stoners Rule”) was a studio version of their jamming session. However, it seems that the guys had more material at their disposal; one year later, they greet us again with their sophomore attempt, “totally…”, via HPS again. Of course, it’s not difficult to guess the context: the album’s cover is nothing more than… a pizza! More than that, have a look at the poster for the current Stöner’s European tour: you’ll see Garfield (the beloved cartoon cat) lying down, eating a piece of pizza, while… smoking idly. Hence, Stöner predispose us for party and amusement, away from problems and work. Indeed, I can imagine the band’s members being genuine residents of Ikaria Island (if you’re unaware of Greek habits, search for information regarding the Ikarians’ way of life and perceptions)! But a simple question arises: Does the musical context responds to this scope? Well, yes, partly though.

In “totally…” Stöner deliver the familiar dusty, desert fuzz of previous decades, with plenty of grooves, away from innovations or experimentations of any kind. Yet, we don’t have exactly Kyuss’ ravaging sound here; the tracks don’t have the massiveness of that sonic blasting wave. The patterns, full of “clogged”, dirty guitar and bass, have a blither attitude, impelling you to sway under the sun while drinking or talking with folks. Stöner declare their purpose instantly through the hopping rhythm and welcoming vocals of the opening “Party March” that simply invites you to idleness. Similarly, the liberating, fast-paced idiosyncrasy of “A Million Beers” won’t let you stay apathetic.

Throughout the album Bjork’s mark is evident; occasionally, you can hear and feel his funky essence beyond the stoner/rock facade, that you know well from his solo albums. Familiar glimpses of his past emerge every now and then; in “Strawberry Creek (Dirty Feet)” you cannot but notice its peculiar simplicity and rather hypnotic motif, while the spontaneous “Turn it Around” might be the album’s trademark with a minimalistic, warm approach, calling you to dance on the desert dust. Indeed, some addictive melodies (like the afore-mentioned instances) will gain your attention and appreciation.

However, there are moments that diminished my amusement, thus preventing me from participating more in the creators’ intentions. Songwriting in some cases didn’t meet the anticipations I had (I admit: I expected something more!), causing me to feel rather disoriented at “Space Dude & The Burn” and annoyed by the unnecessarily noisy “Stöner Theme”. In the end though, you get compensated by the “Great American Sage”, a faint reminiscent of Kyuss, where a forgotten desert hippie nods cheerfully, prompting you essentially to “F@@@ work”, according to the sticky label on Brant’s guitar.

Let’s face it: you cannot avoid the trap of expecting many things from a band that involves two ex-Kyuss members. That alone, suffices regarding your stance towards Stöner; and when you get less, you feel unsatisfied. That’s the case with “totally…”: it doesn’t reach its full potential, but its decency, emerging from some guys who simply want to have fun, surely deserves attention. Hence, if you’re a newcomer in stoner genre and want to “meet” these prominent musicians, then search through Bjork’s extended solo discography or Oliveri’s albums with Mondo Generator; you’ll find many hidden gems there. As for the “insiders”, just listen to “totally…” and praise the sovereign man called Jared Leto, who didn’t realize that the world was changing due to the pandemic two years ago, as he had departed on a desert trip, self-isolating and meditating for quite two weeks. How God can a man be!