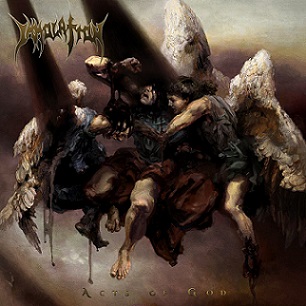 Assume that there is a sick betting agency, where you can place bets on heavy/extreme metal issues. In that case, the possibility that Immolation will release a bad album would have an odd greater than 100. Therefore, if you bet on that incident, it’s absolutely sure that you’d lose your money. You see, Immolation were never included among those bands who disappoint their fans occasionally. Even their less distinguishing works have the ability to draw your attention with the members’ skillfulness and distinctive performance.

I hadn’t realized that five years passed since “Atonement” occurred; that’s the longest period of discographic absence for the band. Of course, the pandemic that intervened delayed some artistic and production procedures. However, it’s good to see that, at the end (hopefully) of difficult and struggling days, the bands are still here.

Immolation’s new effort, “Acts of God”, strides proudly on the path that the New Yorkers carved all these years. It bears resemblances to “Atonement” (and previous works) in terms of diverse and multilevel patterns, unexpected transitions to themes that you cannot fathom beforehand that would occur, familiar “Immolative” performance by all band members. Indeed, the elements that you seek from Immolation are here abundantly. The difference lies mainly in the surrounding atmosphere where you submerge in (Immolation have the ability of grabbing you, and not letting you escape!). I still remember the horrific, depressing and suffocating atmosphere of “Atonement”; that’s an album that I cannot get over yet. “Acts of God” doesn’t sound so much decadent and depressing; it doesn’t make you suffocate, struggling for deep breaths. You won’t come across the doom essence of ideas like “Lower”. Nonetheless, it’s still impenetrably dark and gloomy; a darkness carefully unfolded by Vigna’s seemingly endless subtlety.

It's inevitable; when you write a review about Immolation, you cannot restrain yourself from referring extensively to their riffing mastery (Alas! Omission would be blasphemous!). A riffing so detailed and precise, like a carefully woven embroidery, is seldom found out there. Vigna’s quest for the unknown cannot be restrained within given borders; his ability and technique to launch leads and grooves is inimitable. As always, you come across mid-tempo -mainly- ideas, with plenty of technical, inventive riffages, but this time there’s a clear focus on a more melodic perspective. Indeed, there are many subtle “marriages” of hellish harshness and melodicism that work perfectly, making the new staff more direct, but not to the point of describing it as “simple”. Dolan’s abyssal vocals and Shalaty’s distinctive, adventurous drumming complement to an outcome of the band’s familiar, unconventional standards.

“Acts of God”, despite its long duration (more than 50 minutes) and extensive tracklist of fifteen songs, sounds cohesive, without “rambling” unnecessarily. Each track has its own, idiosyncratic contribution that prevents you from skipping, especially if you’re already accustomed to that particular timber and art. On the contrary, newcomers might be reluctant to reach till the end (this is natural: Immolation were never “easy”).

Amongst many tracks, mundane moments are scarce (if not non-existent). You will drift from the spectacular and undoubtedly intended for live performance “The Age of No Light” to the atmospheric “Noose of Thorns”, the -initially conceived- intensity and straightforwardness of “Overtures of the Wicked” (watch how you’re fooled later!), the heavy and torturous “Incineration Procession”, the outbreak orgy of “When Halos Burn” (that turns into an extremely heavy theme) and the top-notch, almost epic closing of “Apostle”. “Acts of God”, supported by a production team that makes everything clear, is a thriving unholy garden, indicating a band that don’t wish to degrade their quality.

Of course, Immolation cannot sound extremely innovative. They’ve already made their contribution. They’ve already revealed their hidden aces. But that’s not the case, after thirty-four years of existence. What we have here, is a well-structured totality/seminar of well-performed American, technical death metal, that brings Immolation successfully back to their place. Their fans will be attracted and will gain what they seek patiently (I’ve no doubt about that). This relation refers somehow to my introductory paragraph; you bet your patience, but the odd is much higher (and by no means quantifiable). It’s the passion, the dark feeling, the abyss, the mastery, the riffing that make you travel.