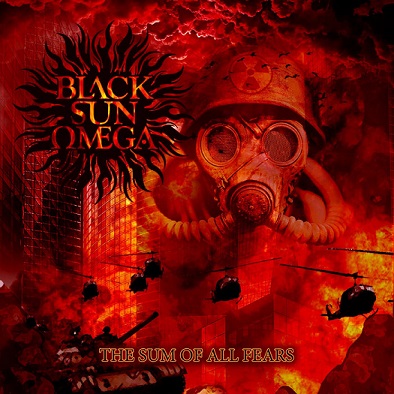 Most bands choose to follow predefined paths. Their perspectives regarding the way they use their influences differ. In some cases, you are very well aware of what they play; you have heard it in the past. However, if songwriting surpasses lack of originality, you hear what they offer with pleasure, despite your deja-vu. Black Sun Ωmega (BSΩ), a new thrash/groove metal band from Patras, Greece, fall perfectly into this category. The band was formed two years ago by Alex Zegk (guitars, vocals), Nestor Konstantopoulos (guitars, vocals), Leonidas Karagiannis (bass, vocals) and Petros Haritos (drums). Their debut, “The Sum of All Fears”, was self-released at the end of 2019. I hear the album constantly during the last weeks and I presume that you will stick to it, regardless of your preferences. Their music has that feeling of the good old American thrash that still excites fans, encompassing modern features concurrently. Indeed, riffing patterns and overall attitude refer directly to the first era of thrash and bands like Sacred Reich, Megadeth and Testament emerge instantly in your mind. However, the BSΩ are not narrow-minded at all. Their ideas, despite originating from a long-standing tradition, are enriched with grooves and heavy metal elements, indicating influences from more modern bands. The guys combine two different worlds to form a cohesive and balanced album, full of aggression and anger. Hoarse vocals are exactly what an album of that kind needs, contributing to the overall hatred and bringing memories of the classic Sepultura’s era (I assume the frontman could sing for a death metal band if he deepens his voice accordingly). All members execute their duties with precision, forming a tight group, but a special mention should be made for the old-fashioned drumming: Petros is a really storming attack behind the kit. All the above are appropriately underlined by the proper production, so that the sound has that peculiar old school feeling, even though groovy or crossover-related ideas are included plentifully. Mid and up-tempo rhythms and aggressive, galloping riffs prevail, especially in thrash dynamites like “Fightback” (a perfect opener indeed!), “Flowing Hate”, “Ground of God” and “Down My Sight”. As for “The Score”, it emerges directly from Bay Area, staring at modern times though; that’s a track that definitely raises addiction and causes panic. However, BSΩ add variety that’s necessary for an album full of violent and angry themes: “The Whore of Babylon” is slow and foreboding (note the acoustic, oriental intro), indicating the band’s ability to experiment with doomy, heavy atmospheres. Also, the melodic heavy metal patterns of “World’s Demise” are easily distinguishable among the overall aggression. With one foot in the past and another in the present, BSΩ make a highly addictive and angry debut, distilling their influences to form their own identity. If you ask me to define the album with one word, I would say “energy”: it’s an unrestrained stream that flows with energy, from the first to the last second. BSΩ indicate noteworthy attributes of songwriting and skillful performance that enable them to draw thrashers’ attention (including 80s freaks and groove addicts alike). For the time being, I assume a live performance of “The Sum of All Fears” might be the perfect choice for those who wish to have their minds blown off when the damn quarantines end.