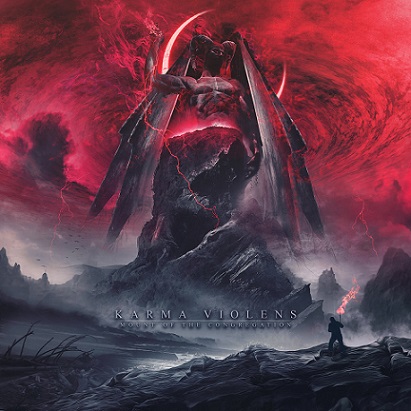 Many years have passed since the formation of Karma Violens in 2002, the band has obviously progressed and its new album, “Mount of the Congregation”, is a new chapter, ready to be explored. You will experience something immersive here, something really amazing. The black metal machine of Karma Violens is fully working and the result sounds consummate; the cold black metal riffs burst out in flames, the galloping rhythm section exterminates everything on its way, the brutal vocals sound harsh to your senses, the whole album could be the soundtrack of the apocalypse. So intense and rough, so cataclysmic and atmospheric, the songs of this fourth full-length Karma Violens album are falling from the sky, like wicked angels, who revolted against their god! The perfect production helps the listener to understand Karma Violens’ message, the cover artwork gives food for thought and each song stands at the intersection of gruesome brutality and twisted melodies. The Greek band knows how to keep the final result interesting – after some listening sessions, you will understand that Karma Violens, apart from energy and passion, has also an active imagination, which will surprise you in every track of the album. I like every note of “Mount of the Congregation”, every song of which is like an artistic explosion. “Embrace”, “My Storm Upon You”, “Kingdom of the Deserters” and “Mark on my Forehead” are just some songs, which reveal the majesty, the songwriting genius of Karma Violens. Come taste this band, this is not just another black metal album …