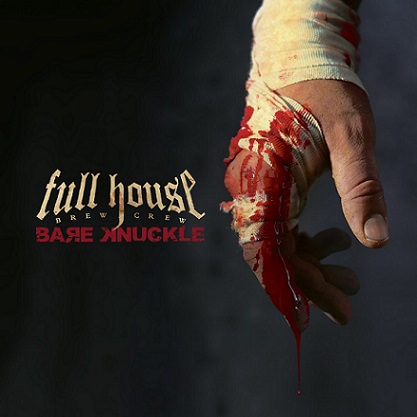 “Bare Knuckle” is the third album by the Greek band Full House Brew Crew, my first experience with the band’s music, a true apocalypse for me. Yes, the new offering of the Greeks is an absolute surprise, since the guys know how to make in-your-face music, with huge grooves and incredible melodic hooks! I really was hit between the eyes by this amazing album, in which American metal riffs meet ear-pleasing melodies. What a shock to listen to these monster riffs and mellow refrains, all through a clear production, which took care of the groovy rhythm section and the heavy sound of the guitars. I could not easily imagine a heavy metal record, where the heavy and the rough can be combined with the mellow and the emotive so harmonically! The Greeks aren’t afraid to express their energy and their great sense of melody simultaneously. With an artistic maturity and boldness, Full House Brew Crew craft catchy metal music in a both modern and romantic way! In addition to these, the quartet created its new songs with great amounts of inspiration. Because compositions like “Cult of Misery”, “Servant of Despair”, “Buried Hope”, “Black flag” and “Shuffled Deck” are phenomenal, such songs aren’t often composed in our days. If you aren’t used to such cross overs, don’t proceed. But if you have an open mind, then “Bare Knuckle” is for you.  Full House Brew Crew aren’t trailblazers, however, they present a well-crafted new album, which, based on riffs and melodies, will make you jump up and down like a maniac! Hell yeah!