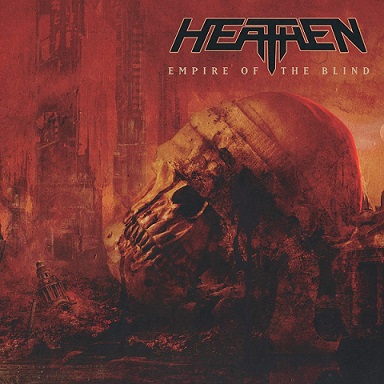 Some bands remain in your subconscious, no matter how often they release new material. Regardless of their discographic activity (or inactivity in certain cases), their albums are such noteworthy examples of inspiration, skillfulness and innovation, that you always worship them and refer to their brilliancy, no matter the passing of years. Heathen are considered among these bands since their first era, when “Breaking the Silence” and “Victims of Deception” thrilled Bay Area’s fans with their speedy approach and technical attributes respectively. Unfortunately, almost two decades passed without new material from the band (including an 8-year hiatus), until the critically acclaimed “The Evolution of Chaos” in 2010 showed that Heathen’s flame was still burning, being a worthy successor of the band’s heavy legacy, without sounding repetitive or addicted to the past.

Despite the expectations for more frequent releases, another decade of inactivity passed. Our patience lasted until September 2020, when the “Empire of the Blind” became available via Nuclear Blast. As the title suggests, Heathen deal again with concerns regarding society: manipulation, deception, lack of free will. These are always crucial themes, given the conditions we experience currently.

The album thrives of all these features that made Heathen remarkable: violent, addictive thrashing riffage, sentimental, mesmerizing patterns and White’s ageless, resonant, expressive voice, capable of conveying with ease frustration and anger in “killer” songs or adapting accordingly in ballad-structured compositions. Production’s approach is similar to the previous record, making the band sound fresh and modern, and not so much old school.

“Empire of the Blind” is highly guitar-oriented, containing tons of riffs that become easily memorable and raise addiction, with Altus and Lum soaring in every track. It’s a pure manifestation of Heathen’s ability to wander in Bay Area’s traditional, aggressive patterns, while paying short visits to heavy metal / ballad forms; that’s a delicate balance hardly to be achieved by anyone out there, but easy enough for Heathen. They have done it in the past and they still do it successfully.

However, after a melodic intro, Exodus’ or Testament’s impact is immediately evident: “The Blight” bursts with rage, being a typical example of modern, American thrash. These influences in rhythmic riffage are easily ascertained in many cases throughout the album, a linkage probably attributed to Altus, who’s also an Exodus’ member. This is not necessarily bad, as songwriting reveals high quality standards, but some fans might be puzzled. The titular track seems thrash-oriented at first, revealing an unexpected turn to a more heavy metal, or even epic essence. A pure thrash attitude arises again in “Blood to Be Let” and “The Gods Divide”, the most fast-paced track of the album. In “Sun in My Hand” and (mainly) “Shrine of Apathy” the band revisits their more melodic, ballad self; the latter, with its mind-blowing, shattering patterns, will travel you to other existential levels, reminding great moments of the past.

Undeniably, Heathen’s trademark remains the guitar duo. Altus and Lum enrich every song with imaginative, ingenious, timely leads, declaring unparalleled virtuosity and composing ability. In each track, they make you impatient to find out what they have in their reserves. However, in the instrumental “A Fine Red Mist”, they reach peak, providing simple (or not so simple after all) lessons of how a guitar “dialogue” should be structured.

Through “Empire of the Blind”, Heathen declare that they are here, returning to their prominent position in the American scene. This amalgam of Bay Area’s thrash and melodic -and even epic- attributes will surely attract many fans, despite its occasional resemblance to Exodus’ approach, since the band’s skillfulness and musicianship is undeniable and still present. We like their comeback, wishing that their next work will occur soon.