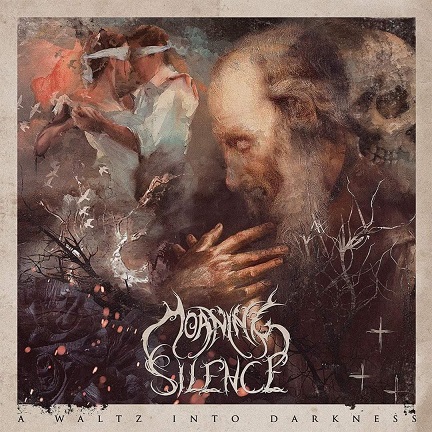 Moaning Silence were formed back in 2014 in Athens, Greece, from Christos Ntounis, who is the basic composer/songwriter of the band, to play an atmospheric version of doom/death metal with gothic influences. The bands style draws influence from the likes of My Dying Bride, Paradise Lost of their darker moments, old Anathema and Theater of Tragedy, especially in the way Christos' male vocals blend in an avant garde way with the female vocals of the band's new female singer, Eleftheria Angeloudi. Moaning Silence are also influenced by the old Greek doom/death metal scene and keep the connection with the sound of bands like On Thorns I Lay, Nightfall and Septicflesh. "A Waltz into Darkness" is their second full length. This ambitious work includes eight compositions full of the melancholic and depressive feeling the genre requires, a feeling that Moaning Silence offer in their own personal way. Moaning Silence never forget that through darkness some rays of light always appear to reflect hope. So, in their songs there are some brighter moments, too. There has been a great job done in the recording of the album. You won’t find any mistake, since Bob Katsionis (ex-Firewind) mixed and produced the album at his own Sound Symmetry Studio. The whole album is a journey that takes you with its flow and offers some excellent songs like the solid "Rite of Decay" with its mind blowing riffs, fabulous vocal work and very deep production that makes it sound as if coming from a church or the depths of a well! The tracks are memorable and effective like for example "Towards the Sun" or "Song for Winter" which come with killer melodies that will stick to your mind for a long time! "The Lights of Alexandria" is the last song of the album, and a song that reveals the secret connection of dark music with poetry. The words of Constantine P. Cavafy, one of the most famous Greek poets, and one of the most important poets in the human history, mingle just great with the bands ultra-melancholic mood to something unique. Moaning Silence (what a great antithesis in the band's name) call you for "A Waltz into Darkness". Come dance!