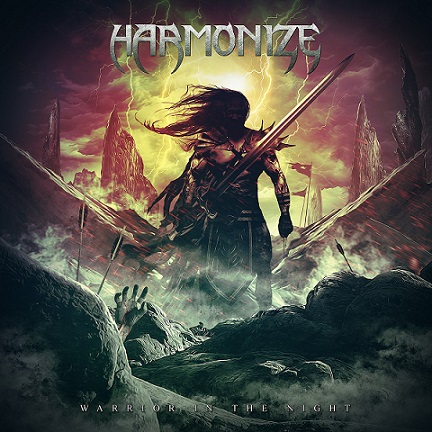 Harmonize hails from Nicosia, Cyprus, and with its debut album, “Warrior in the Night”, Harmonize is aiming high. This first Harmonize full-length album displays the band’s music style, which looks like a riddle – mainly influenced by Metallica, Annihilator and Iced Earth, the Cypriots play a kind of heavy/power metal, with many thrash/death metal, epic metal and doom metal elements. Harmony shows us a bouquet of inspired songs, which are performed theatrically, compositions with prologue, main body and epilogue, powerful yet melodic tracks, like “Never Back Down”, “The Astonishing End”, “Tonight” and “Warrior in the Night”. The band has an epic and pompous character – combine its majestic sound with the furious riffs, the catchy vocal lines and the dramatic guitar solos, and you get close to Harmonize’s music personality. This concept album, based on a clear, warm production, utilizes the passionate and soulful performances of each member and satisfies the listener with its inner charm. Some people may think that the songs in “Warrior in the Night” are too long, however, if you show trust the band and the album, you will be rewarded, because the songs are complex and diverse and need some time in order to grow inside your mind. Harmonize has fantasy and inspiration, which lead them in an intriguing result. Of course, they don’t reinvent heavy metal, nevertheless, they have a certain, personal aspect that makes their stuff unique. Welcome this new force in the heavy/power metal scene and listen to this ambitious debut album.