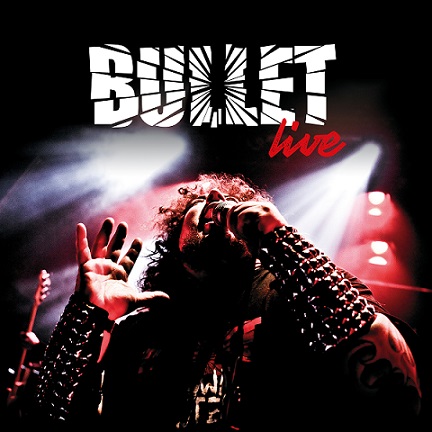 It was in June 2009 when I saw Bullet live for the first time, actually on their home ground, in ‘Muskelrok’ festival in Alvesta and the famous Småland in South Sweden. One of the best underground and also underrated hard rock/heavy metal festivals, it is there where bands with prospect and guts are born. Bullet is band which already from day 1 does not take prisoners, especially live. They seriously kick ass and with that setlist, which is their absolutely best of, offer what best can be offered to a thirsty audience: Pure heavy metal at its finest hour! We are talking about a band which is the perfect mixture of Accept, AC/DC and Judas Priest, altogether so awesome, so pure, so fucking great! The energy is so unbelievable, the riffs are thundering following one after the other, the whole band package is so originally old school, this band is built for big packed places, to give pleasure to the heavy metal fans. Listening to this live record, you cannot but seriously headbang from the first second of “Storm of Blades” until the closing of “Bite the Bullet”. It feels like you are part of the audience, you are a sweating rocker with your metal fists in the air. Their songs have already been awesome in their studio works, hits like: “Turn it Up Loud”, “Dusk till Dawn”, “Dust to Gold”, “Bang your Head”, “Heading for the Top”, “The Rebels Return”, everything is here. But this “Småländska gäng” is made for the bigger audiences out there, they are the real thing live, each one of them and altogether. It might be considered a “hubris”, however this live album could easily be considered a classic, yes, in 2019! Their energy, groove, metal DNA are all unbeatable! You can tell how old school this band is even from their old, vintage tour bus, with their logo in front! These guys really mean it, they really want to bang their heads all the time and they are here to make us do the same, being loyal to their roots, influences and backbone. Open up a beer, sit comfortably in front of your stereo and let yourself to the energy of this band which will definitely make you want to listen to the record again and again! Bullet is heavy metal and heavy metal is Bullet! Hail!