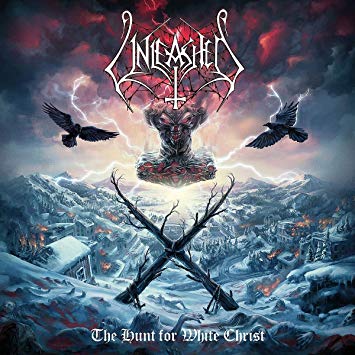 What should someone expect from Unleashed in 2018? Innovation or stagnancy? Constant breakthroughs, bearing in mind the unfathomable legacy of the past, or awkward imitations of themselves? The answers in questions concerning bands that have set the foundations of a whole genre (usually) lie somewhere in between. Literally, that exactly is the case with Unleashed, who after 30 years, are still active in the Swedish death metal scene, with frequent releases.

Overall, the band retains its familiar, classic sound to some extent, although the lyrical orientation in the last decade has changed, according to Johnny Hedlund’s vision. The current era, from “As Yggdrasil Trembles” in 2010 onwards, focus lyrically on Norse mythology, dealing with the world of Odalheim. Hence, their 13th album, titled “The Hunt for White Christ”, via Napalm Records, shares once again this concept, extending the storyline.

Musically, the album is aligned with the mythological background, retaining the essence of the last three records; that translates to the classic Unleashed’s death metal, distilled though into a more heavy metal (or melodic) orientation that signifies the epic, warlike attitude of most songs. This is not necessarily bad, but those who crave for the chaotic death brutality and rotting atmosphere of the first era, might skip over (“Where No Life Swells” and “Shadows in the Deep” are not present here).

However, this does not mean that “The Hunt for White Christ” lacks aggression. The opening track “Lead Us into War” features classic, up-tempo, death metal riffing, revealing that the widely known raw aspect of the band, combined with breakdown parts, transpires the whole record. The galloping, dynamic rhythm of “Stand Your Ground” and “They Rape the Land” is distinguishable, but the mid-tempo “Gram” might be the peak of the album, being technically appealing and diverse, with an interesting acoustic part and worth mentioning riffing and drumming patterns. The darker, heavier “The City of Jorsala Must Fall”, with memorable and warlike refrains, is followed by “Vidaurgelmthul”, probably the most heavy metal track of the record, due to its astonishing riff. On the contrary, “By the Western Wall” is anthemic and slower. Such differences between tracks enable everyone to listen easily to the whole album, from start to finish. Needless to say, most songs contain well-crafted lead solos and occasional acoustic parts (indicatively, pay attention to “By the Western Wall” and “Gram”), reflecting the dedicated work of the band and the production team in this respect.

“The Hunt for White Christ” is more inspired and appropriately structured than its predecessors, indicating a balance between aggression and melody, upon the pillar of epic element. It might not be a cornerstone of the band’s long discography, but surely is a new peak of the last era, directly comparable to “Odalheim” and superior to the mundane “As Yggdrasil Trembles” and the unequal “Dawn of the Nine” three years ago. Overall, “The Hunt for White Christ” should be acquired by fans who search for a good effort by that historic band.