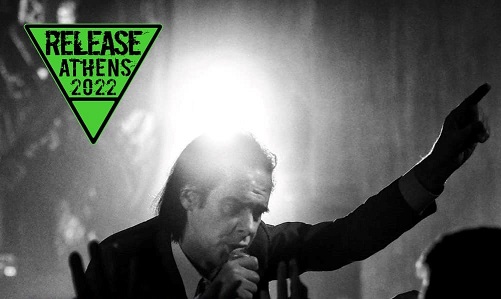 Nick Cave. A great artist of the dark art, a gothic music icon, a legend of the alternative/indie music scene. Nick Cave, this famous musician, visited again Athens, Greece, for a unique live concert, in the frame of Release Athens Festival. I will put it straight – I am not a fan of Nick Cave, his music is not my cup of tea. This would be my first Nick Cave concert, so I didn’t know what to expect. Poor boy, you should say!

Loyal to the schedule, the band which started this day of the festival was Royal Arch. We are talking about a Greek band, which played its indie rock to a small crowd. Their performance was fine, their songs sounded interesting and they warmed us up. A nice beginning!

Sugar for the Pill was next. Again a Greek band, their indie rock/shoegaze set was satisfactory and they pleased the audience in Plateia Nerou, which audience was getting bigger and bigger.

The sun was setting, it was getting dark and it was the perfect time for Mogwai. The well-distinguished band from Glasgow hit the stage and I can say that they impressed me with their ambitious post rock. Their dreamy music forms beautiful soundscapes and its ventures, its ups and downs, its twists and tricks hold your attention. I am not a post-rock fan, but what I witnessed was truly amazing. This mysterious, mesmerizing post rock is the ideal soundtrack of modern life, the ideal music that encompasses our thoughts, our fantasies, our fears and desires. Mogwai shared their enchanting music with us and blew our minds. We were ready for Nick Cave and The Bad Seeds.

Nick Cave entered the stage and everyone got crazy in Plateia Nerou, which was now overcrowded. What I witnessed in his two-hour set was breathtaking. I saw and listened to a musician so passionate, so energetic, so sorrowful. Nick Cave laid down his soul on the stage of Plateia Nerou, he uncovered his inner self, he expressed his heart and mind, he mourned in front of us. This live show was a sacred moment, a musical, artistic moment which was engraved in our mind. It doesn’t matter which was the line-up of The Bad Seeds or which songs were performed that night. What matters is that Nick Cave and his band gave their best, gave their everything to us – and that was enthralling for all music aficionados, who were stacked packed like sardines to enjoy Nick Cave. I don’t remember the song titles, I remember that it was a fascinating concert, which explained to me why Nick Cave is considered such a great artist. His warm, heartfelt vocals touched me, shocked me, his wonderfully sung melodies were dramatic, theatrical, brought tears even to the strongest of his fans. This dark art, this dark gospel, this lunatic rock n’ roll came from another dimension, another world. And his band, apart from tight and precise, stood there, playing the music of our dreams, our nightmares. Nick Cave got “naked” for us and we appreciated that, opening our soul too. Yes, the communication between the artist and his audience was wonderful, life-changing. I have been in many live shows, but Nick Cave’s live confession was monumental, phenomenal.

I left the place full – full of melodies, full of messages, full of wonderful thoughts. You can name me a Nick Cave fan, even if I don’t know a goddamn song title. I admire now Nick Cave so much, I feel lucky I was there that night and I am looking forward for the next time. Into My Arms, o lord …