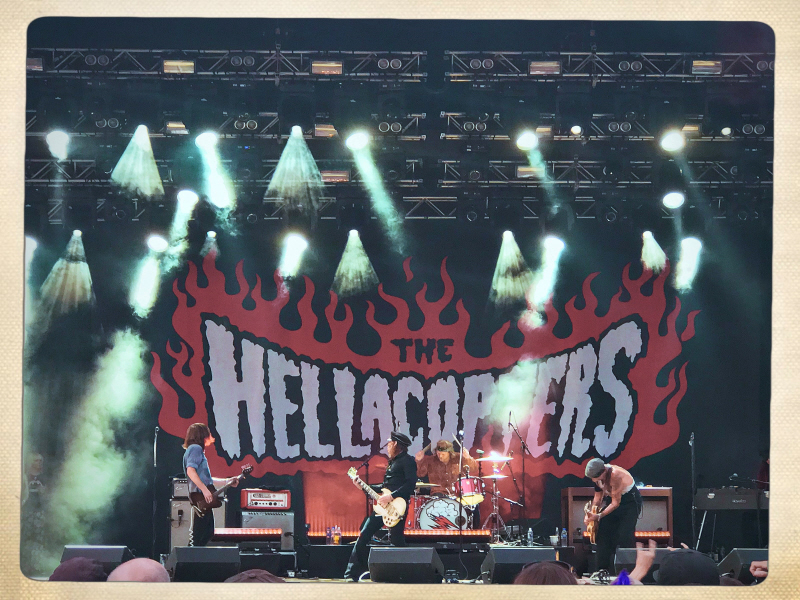 Being one of my favorite bands ever, The Hellacopters’ live at Gröna Lund in Stockholm was not just highly anticipated, but it could be characterized as the gig of the year (until next one). And someone feels lucky participating on a high energy rock n’ roll party at the band’s hometown, on a beautiful August evening.

Impressive was the sound of the helicopters approaching, as a backdrop for the band’s entrance on stage, heating up the crowd and setting the levels of attention to red alert, like the backdrop of the stage, with the Hellacopters logo in flames. “Hopeless case of a kid in denial” started everything, and here we have a band massively starting the show on full throttle. Nicke in the middle of the stage with his white Gibson SG electrifying everyone possible with his amazing performance. Dregen, one of the original members of course, has been in contact with the public all night long, playing solos and rhythm guitars his own special way, reminding us how much we like the first Hellacopters records, and his energy and motion, a trademark of each one of the members throughout the band’s years. Dolf De Borst (an old friend of the band, since 1998), has already replaced Sami Yaffa, who toured with the band the last period, and who also replaced the all-time bass player of the band Kenny Håkansson, did great, both on bass and also on backing vocals on several occasions. The other 2 members of the band, Anders “Boba” Lindström (keyboards) and the mighty Robban Eriksson (drums) were just awesome... Either taking over Dregen’s guitar (Boba) and doing a Sex Pistol’s cover (‘Bodies) which was a highlight of the night, or being one of the most massive, awesome and trademark drummers out there… Magic!

Set-list wise there cannot be anyone left unhappy, as they played a really good bunch of their whole career, including their most recognizable hits but also some not so expected ones, which was a very welcomed thing!

It feels so great to see Nicke & Co. live on stage, playing their tunes, giving an exceptional show, giving it all for the crowd and proving one more time that this bunch of dudes are one of the best act to see live! No question about it! We are talking about the original High Energy Rock N’ Roll act, one of Sweden’s finest musicians, but also band to make us wanna see them soon again, but also record new songs soon, why not?! In 2008, we had “The Tour Before the Fall”, drawing the curtain down as a farewell, but, but… You never know what comes next and we were always wanting this to happen, a Hellacopters reunion, that might lead to record new stuff...! So, bring it on boys! Skål till nästa gång! (Cheers till next time!)