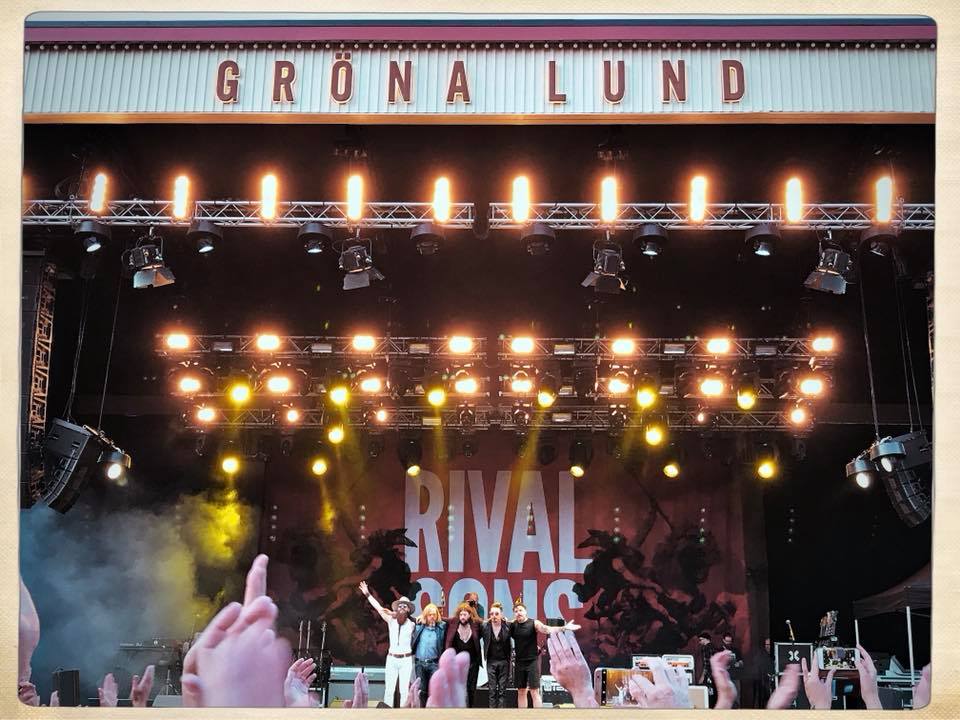 Gröna Lund is a beautiful amusement park on the island of Djurgården, in Stockholm Sweden. But it is also one of the best live open-air places not only in Sweden, but in many countries as well. And a really famous one. Lots of fathers and mothers attended the full gig, carrying their young or very young children on their shoulders or baby carriages, showing the way to the next generation. Something which was very positively commented by - the barefoot - Jay Buchanan as well, recalling his childhood/youth years, when his parents organized music parties/gatherings with friends at home and thus influencing his own pathway towards music.

Having the opportunity to go at Gröna Lund for the first time and see live the Rival Sons, I realized how much I have missed watching a REALLY good band live in an open space. And Rival Sons were really worth it! The intro of “The Good, The Bad and The Ugly” was the perfect starting point for a gig I will remember for a loooong period. The Long Beach California rockers blew us away with their electrifying setlist, covering the whole span of their discography, I would say a very representative set lit, highlighting their best moments so far. The whole band enjoyed the live show so much, and it has actually been only a few months since they visited Stockholm for the last time (August 2017, last gig before they ended that tour to get focused on writing their next record). Jay specifically mentioned how much he likes it (and the whole band of course) in Sweden and really impressed the audience all the way with his absolutely entertaining performance and contact with the fans. The whole band gave it all, however, I must highlight the high energy and overwhelming moments of the drummer, the keyboard and guitar players (Mike Miley, Scott Holiday and Todd Ögren-Brooks respectively). Their groove, vintage rhythm n’ blues style and avid way to deliver the songs is quite remarkable and actually, this solid bonding is a huge part of the success of this band, on the road as well, apart from their studio great records. Scott Holiday is an exceptional guitar player with a magic touch on his 6string Firebird style guitars. Amazing...! (And, always a Sharp Dressed Man with an impeccable style!)

Till next time fellas! Stockholm loves you back!