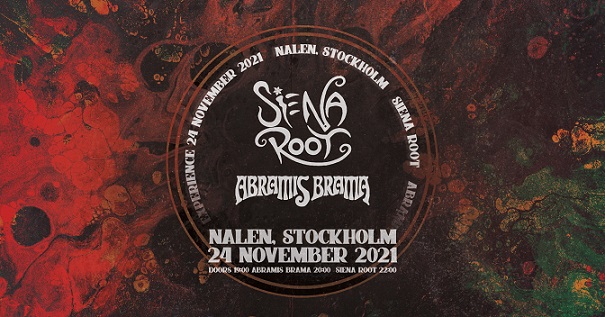 Two special bands for me played two fantastic shows at Nalen in Stockholm. Abramis Brama, always a great band to watch, kicked off the night with huge energy and groove and proved once again why they are so fun to enjoy! Playing some of their very old and classic tunes (yeah, it’s been so many years that this band really ROCKS!), but also a few of their latest ones, all delivered in their trademark awesome way. Ulf, P-O, Trisse (I love his drumming so much!) and Mats all play their brilliant way as always! Endless groove, great energy, party mood, Sabbath riffs, beautiful melodies, solid and compact sound on drumming and bass, this band really plays better and better as they grow older. Another great show from the lads! It’s never enough, you always want more from them! Then, Siena Root took over ... Oh my... What an enjoyable show that was as well...! Incredible and unbeatable groove as always, topped with the beautiful voice of Zubaida Solid, who really conquered us all with her keyboard skills as well, playing with the vintage keyboards. This band is always a pleasure to watch live ...: Samir on bass, always a dominant figure for the band on his Rickenbacker for so many years, a calm and gracious force of Siena Root. Love Forsberg was absolutely majestic on drums, delivering some great vocals as well, all in his unique style. Johan Borgström on guitars showing some fantastic guitar soloing skills and adding a classic rock flavor to the songs, especially to the older ones, but also to the newest material, from the band’s latest record in 2020, released shortly before this terrible pandemic broke out. Anyway, there were two highlights for me that night for Siena Root: firstly, there was a guest who played the flute on a couple of their songs, adding more magic to their show and making the crowd so excited to watch them (million of apologies, I did not catch her name...)! She played so well, so nice and fitted perfectly with the overall feeling of the songs, the band and the evening in general! And what was incredible to watch as well at the end of the show, that both Abramis Brama and Siena Root played together November’s “Starka Tillsammans”! How cool is to see two modern Stockholm bands covering another Stockholm legendary band from the ‘70s in one of their great songs! That moment was the epitome of the lyrics: “Vi är starka. Starka tillsammans’, meaning, ‘We are strong, We are strong together’. And yes, both bands played so well the whole night, making us all happy and lucky to have witnessed a beautiful evening. Cheers to both bands then, we want to see you soon again playing live!

Hornstull is a very popular area in Stockholm, where also Debaser is, but there are some nice bars and restaurants, where the locals usually go out during the working days, and of course especially on a Friday night. And when you have the chance to see Per Wiberg, performing live his solo band songs, you never turn down the opportunity. Per is a very special and unique musician, with such an impressive career and contributions to so many different bands, genres etc. Therefore, this show has been so much anticipated by myself. Due o the fact that Per does not actually have a full band in the normal way, and most of the stuff is done by him, some of his friends contributed as well to the show: Nicklas Barker from Anekdoten and Morte Macabre played rhythm guitars, Micke Tuominen from Solitär played bass and contributed some backing vocals and Jesper Skarin from Switch Opens, VAK and Misery Loves Co played drums. Of course, Per was on the keyboards, the lead/rhythm guitars and the vocals. Actually, the way they played for almost 50-55 minutes, looked and sounded like they have been playing altogether for a long time! They played songs from Per’s LP and EP, with a fantastic groove, energy and a very solid and convincing attitude. The audience enjoyed very much the show in the basement of Snotty Seaside, something that did not affect at all the sound, the performance and the overall feeling. There is no need to mention how good Per is on keyboards, guitar solos but also on vocals - this incredible ability of him to adjust to different conditions and situations is a trademark of his. Looking forward for new material and also to seeing him playing live soon again! New Rose is a band that I have not been familiar with before, although this will definitely change, as I liked their sound and live performance. This is an indie rock band of three excellent musicians, who have released one record so far (too bad as they are so good!) and they kick ass on stage! Raw energy, great feeling and good vibes, also incorporating different influences from new wave and ‘80s rock, all delivered in a very fresh and modern way. Daniel Bengtson on bass, Niklas Korssell on drums and Gustav Nygren both on vocals and guitars is definitely a great band to watch. And a great band to end a beautiful Friday night – till next time! 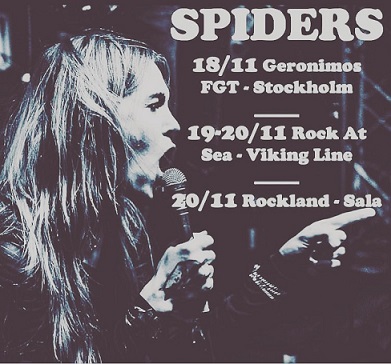 It’s always great to meet and see the Spiders play live. I love this band, their energy, groove and everything that they bring on stage. Once again, it was a really fun evening at Geronimo’s restaurant at Gamla Stan, the Old Town in Stockholm. John Hoyles & Co. are always a pleasure to see them performing live. Ann Sofie conquered the crowd with her direct and charming act, as always. The band from Gothenburg played old and new songs for about an hour or so, as part of their small Swedish tour on different cities. That’s the third time I saw them live, and I must say that each time is better than the previous one. Their high energy rock n’ roll keeps you active and mood-high the whole evening. Ann-Sofie, John, Olle, Ricard and Rickard gave a very beautiful show for their Stockholm fans who came to see them on a Thursday evening. Robust and solid drumming (with a little help from Ann-Sofie!), majestic solos from John, and till next time, cheers! 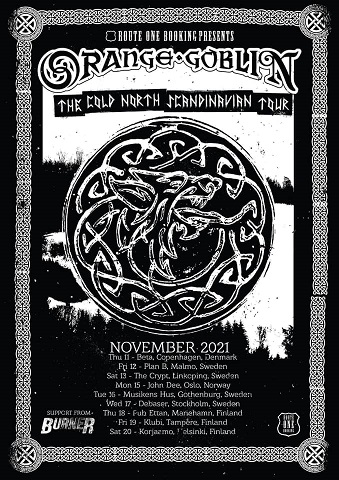 A few days after the Candlemass gig that I witnessed, in the middle of the week, I went to Debaser Strand at Hornstull, a venue which hosted so many bands before, a classic Stockholm venue, by the waterway in Södermalm. I missed the first song from the first support band, Spiral Skies, but the band paid out the whole time that they played! Their vintage and warm sound, the beautiful female vocals and the overall energy of the quintet warmed up the audience as more people were slowly coming. They play a lovely groovy and inspired ‘70s heavy rock with psychedelic influences and charming melodies. The band is compiled by a female vocalist (Frida) with a distinctive warm voice, and four guys, who appear on stage wearing theatrical masks, adding to the theatricality and the occult side of their music, a very smart and effective way to present a beautiful imagery during their live shows. This is definitely a band that I will check more and try to listen to their tunes.

The next band, which has supported Orange Goblin during their Scandinavian Tour in November, is another Swedish band, which I did not have the chance to see live before - Bürner. The perfect support act to Orange Goblin! They play rock n’ roll and their sound is 100% influenced by Motörhead, all the way! They are very energetic and uplifting and make the audience headbanging hard. Their approach is straight forward and direct, with a lot of communication with the audience - they also teased the Stockholm audience about Gothenburg (I don’t know, maybe they come from the West Coast?!) and that added to the overall party mood of their playing time. Bürner is a power trio that is worth checking out.

The main act, of course, Orange Goblin from the UK, was touring the Scandinavian countries, and weirdly enough, for different reasons I had not seen them live before, so here was my chance! They performed really well during the whole night, having a new bassist (Martin is no longer in the band) and playing with so much energy and passion. Ben Ward, the front man, kicked off the gig by paying tribute to the mighty and sadly gone L-G from Entombed, which was quite an emotional moment (Ward also wore an Entombed, Clandestine-era T-shirt). Anyway, the band played for 75 minutes approximately, with a best-of set from their 25-year career, covering all the tastes of their fans (they also played from the “Coup De Grace” album, one of my personal favorites). In a few songs we had some small mosh pits in the front rows, which was awesome (not for the ones who were close to the pit though!). Overall, it was a very good show from the Britons and I really look forward to seeing them again.

Watching Candlemass live has always been a great experience, especially while Johan Längqvist (vocals) is back for good, following a really good studio album. The legendary band had announced that they would play two special live shows in Södra Teatern at Mosebacke in Södermalm, which is in their hometown Stockholm, one evening with “Epicus Doomicus Metallicus” in its entirety and a second evening with “Nightfall” in its entirety. For different reasons, we were able to attend only the first live show, unfortunately. So, I must admit that this is one of the most special gigs ever for me, precisely because watching a heavy metal band inside a theater makes things more classic, more prestigious and overall majestic. And also, because the band itself surpassed itself in the performance, the sound, the overall feeling. It was really awesome to see Leif Edling back in such good mood and form, playing and communicating with everyone! “Epicus Doomicus Metallicus” was absolutely fantastic, the sound was so heavy, crunchy and around 250 people enjoyed the classics from this heavy metal masterpiece. The highlight of the night was the cover to Trouble’s “The Tempter”, a very special moment, which the band dedicated to Jörgen Sandström (Entombed, Krux, Grave, Death Breath, The Project Hate), an old friend of the band, who has also played live with the band a few years, was present at the theater and had his birthday on the same day of the gig. He received a birthday cake while Leif Edling prologued ‘The Tempter’ as a tribute to Eric Wagner, who passed away a couple of months ago. This night (and the next one for “Nightfall”, of course) was a very special one for the band and their fans, who were able to attend this gig. Especially for the ones, like myself, that went to a live gig after almost two years. Long Live Candlemass and Leif Edling!