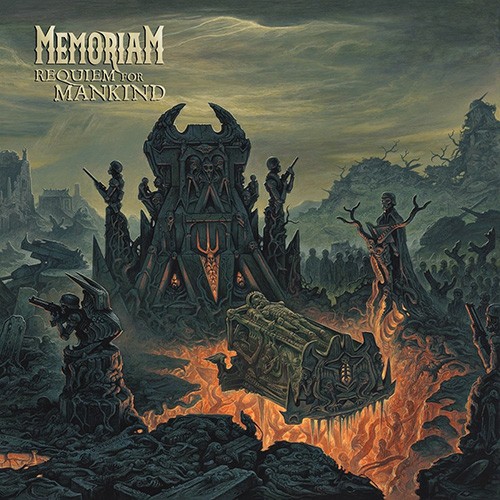 Memoriam either suffer from some kind of hyper-orgasmic creativity or have a significant backlog of demo material, originally intended for release under Bolt Thrower’s logo. I cannot explain in different terms the release of three albums during only two years of active discography, a phenomenon not very common out there.

Until now, their music revealed a rather close connection, on the verge of enshrinement, with Willetts’s and Whale’s legendary ex-band. “For the Fallen” in 2017 was considered as a high-quality continuation of Bolt Thrower’s tradition, being crushingly heavy and gloomy (remember the incredible “Last Words”) and encompassing few surprises, like a discreet crust element (“Corrupted System”). However, the rather unequal and naive “The Silent Vigil” that followed one year later failed to add something new, indicating stagnancy to a preordained path; exempting few tracks, most of the album was just an uninspired repetition of what we already had heard.

Taking under consideration these comments, it would be interesting to figure out if Memoriam’s new effort, “Requiem for Mankind”, released earlier this year via Nuclear Blast, makes a difference. Of course, we should not look for groundbreaking innovations in case of a band that has strong connections with the past and does not show intentions of breaking them (it is their right anyway); in that case, composing quality and integrity is what we should seek.

From the very first listening session, it is evident that Memoriam are still firmly attached to Bolt Thrower, regarding composing and lyrical content. “Requiem for Mankind”, like the two previous records, contains mid to slow tempo songs, relying on the known heavy atmosphere that is the trademark of the band. The creation of a foreboding musical landscape is in accordance with the favourite themes that the band deals with: war, decay, filthy leaders, courage for resistance. In this respect, the album sounds as it should be: grim, mournful and pessimistic about the humans’ essence, being really heavy in the traditional, old-fashioned way.

Memoriam once again use the classic “tank-like” death riffing and drum beating we are accustomed to. Hence, there are no surprises or new additions present here. In “The Silent Vigil” this didn’t work effectively, as certain songs were uninspired, revealing sloppiness during the composing process (call them fillers). Luckily, “Requiem for Mankind” constitutes an improvement in this respect, containing some appealing patterns that may attract the audience’s attention. “Undefeated” and “Austerity Kills” have interesting and dynamic parts, while “Refuse to be Led” experiments with faster tempos. On the contrary, “In the Midst of Desolation” is doomy and grayish, gripping you with slow riffs and proper drumming. “The Veteran” is the slowest, heaviest song of the album, being an example of how depressing a composition can be, conveying the lyrical concept of a man struggling with his past.

With the above exceptions, I cannot find something truly memorable in this album. I do not imply that the rest of the songs are crap, but they do not stand out easily. I think Willetts’ voice is the best incentive for someone to hear “Requiem for Mankind” from start to finish: primitive, imperious, without ageing, it gives the proper belligerent feeling to the album.

Overall, the record does not offer something substantially different. Admittedly, it is well-crafted and -as mentioned earlier- better compared to “The Silent Vigil”, but it cannot reach the quality of the debut, since riveting songs like “Flatline” and “Last Words” are missing. It remains faithful to the tradition of the English scene, something that is not necessarily bad. However, despite being a good effort, it is a proof that Memoriam cannot move forward, indicating that something more is needed that will grasp us and make us put “For the Fallen” aside.