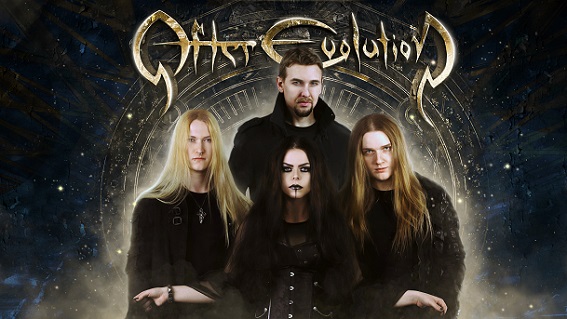 It is somewhat late that I have discovered After Evolution, but as people say, better late than never. Because After Evolution is a great band and its sophomore album (“War of the Worlds”) is a magnificent record release that will thrill all fans of melodic rock/metal music. Imagine a more metal, symphonic and gothic version of Evanescence and you will understand how After Evolution sounds. Their melodies are exquisite, each song of their new album is an earworm, with hooky vocal lines, massive guitars and thunderous drums! So, it was a matter of time that Myth of Rock and Dimitris Zacharopoulos would interview the frontwoman of the band, Nikolette Olson, who gave some really fantastic answers! Behold a new hope of the female fronted metal scene, After Evolution!

Give us a biography of After Evolution.

Well, in 2013 me (Nikolette) and Michal have met and we talked a bit about our dreams and he wanted to be the part of a band and be musician as well as me. So later that year we joined some “garage” band but we wanted more. We wanted to create original music and take it more seriously. So we decided to create “After Evolution”. For a few years we were just “duo” and trying to find right members to start with creating our original music etc. In 2016 we’ve decided we are ready and we started to play few gigs and people told us that our music sounds great and asked us a lot if we have some album they can buy to support us but we didn’t have any so we’ve decided to record one in a garage with only 1 microphone. It was really a challenge but people liked that a lot even if it was “garage” quality. Later in 2017 a recording studio found us and emailed us with a proposal to record a professional album and get signed with WormHoleDeath and we’ve agreed but when I told about those news to my band our ex bass guitarist decided to leave because he wanted to play different genre and to go his own way so we asked Adam Bittó to join us and he agreed. In summer 2018 we have recorded our first official album “War of the Worlds” in Italy, but a month before the recording session our ex drummer decided to leave because of some personal reasons so we hired a session drummer to record that album with us. We were already in contact with our current drummer Vic Janas that time, but he was not available to go to the Italy to record the album. About the year 2018/2019 the mix and master of the album has been finished and we were working on album art, new image and all those necessary things and also we were rehearsing a lot to get synchronized and as you already know in 2020 and 2021 was Covid-19 pandemic so we’ve decided with our manager to wait with the album release until the pandemic is gone and in August 2022 we have officially released our “War of the Worlds” album!

You released your second album some months ago. How do you see this album now? Why did it take you six years to release this second album?

I see in this album a lot of potential and I am proud of it! Every time I receive a message from some fan or another musician about how much they love our music, it makes me and all the band members very happy! It is really a huge inspiration for us! And why we took 6 years? Well, it is as I’ve already mentioned in the previous question. First thing is that we were students and we were not able to pay for professional recording session for our album and I wanted the next album to be professional and also I didn’t want to release the album (“War of the Worlds”) which our drummer or the members were not able to play live due the changes in the band and when we were ready to release it the Covid-19 hit us.

Where would you trace the differences between “War of the Worlds” and “Threnodies”?

“Threnodies” is more gothic styled album and less orchestrated. It is about feelings, rotten world around us and about all we are going through in our life in more poetic way. “War of the Worlds” on the other hand has whole the story I have created, it is more symphonic, it is bigger in orchestras and more towards the style I want to direct my band musically. With the “Threnodies” album I was kinda finding myself, the way I want to compose and lead the band and the album “War of the Worlds” is the right way I wanna go.

How would you describe your music style?

If I would have to describe our music style, the simple answer is “Symphonic metal” but the reality is, that it is more epic, more orchestrated and more towards epic film or game music with the metal and rock elements. So I would say epic “symphonic” metal genre because the main element in our music are not guitars or drums, but orchestras. When the orchestras are ready the second we are working on are guitars and drums.

Which bands have influenced After Evolution? Which are your personal vocal influences, Nikolette?

It was not exactly the bands who inspired us, our music is inspired by Audiomachine, Two steps from Hell, Thomas Bergersen or Hans Zimmer. But the idea to start with symphonic metal in general was thanks to Nightwish and Evanescence. We all like symphonic/gothic metal genre and those bands are the biggest names who directed us this way. My personal vocal influences are Amy Lee for example, because she has an amazing vocals and also “The Phantom Opera” in general is my inspiration, because I love getting my vocals better by being able to sing all the songs. I am self-trained vocalist, not classically trained so I am working by myself on my vocals. I am only classically trained pianist.

As I’ve already mentioned, the album has been recorded in Italy. It was in the Mathlab studio and the mixing and mastering has been done by Jonathan Mazzeo with help of our manager Carlo Bellotti. How the process was exactly of the mix and master is unknown to me, because we have recorded the album, and the mix and master has been done after few months we have left the studio. I have composed all the music before we’ve reached the studio, all the orchestral parts were ready as well, so we’ve just recorded the instruments and vocals and the rest was up to the Jonathan Mazzeo.

Who writes the music and the lyrics in After Evolution? Where do you draw inspiration from?

It is me who does all the work! :D I am writing all the music and the lyrics of the band. But I am trying to give some space also to other members. So basically I compose the orchestras, the whole structure of the songs, vocals and lyrics and when it is ready we work together on drums and guitars. I share with them my ideas and they share their ideas with me and which one is better and more suitable for the song that wins. I am not drummer or guitarist so we cooperate together when we do guitar and drum parts. All my inspiration comes from game and film music. Because I love epic orchestral music and also the inspiration is the story I have created. I want to include in my songs the story and let the people to feel the story, to feel the music. I want my music to speak to their hearts and souls. That’s my biggest inspiration.

I will repeat myself a little bit, but it is about the story of apocalyptic world, where the people are hidden in the underground from the demons and apocalyptic world above. If you read the lyrics of our album, song by song, you will see the story, but mostly it is about the girl who is destined to restore the balance back between those two worlds again and it is up to her if she reaches her way or decides to destroy the world with her power. It is full of magic, hope, trust, demons, darkness, pain and everything you can imagine.

Do you watch movies? Name your favourite movies.

Of course I do! I am movie fanatic if we are talking about sci-fi and fantasy world! I am huge fan of Star Wars, Marvel, DC, Lord of the Rings, Game of Thrones and now also House of Dragons etc. When it comes to some kind of fantasy or sci-fi genre I have to be on the movie premiere in the cinema!

Do you read books? Name your favourite books.

Yes I do, it is the same as the films, but little bit different. I am more into fantasy/romantic genre, I love Shakespeare’s books, “Romeo and Juliet” is my most favourite one, Lauren Kate “Fallen” series etc. I also love mythology books.

Yeah there is a metal scene in Czech Republic. Not as big as in Finland for example, but there is a lot of people loving metal music genre and also we have few musicians / bands well known here playing this genre and also great festivals. The bands are not worldwide known, but yeah. I don’t know, if it is difficult, because the problem is, that most of the well-known big bands have songs in native language which is problem and there is very few Czech bands trying to reach that world known status and having songs in English and I don’t blame them. When we were at the very beginning a lot of people told us something like: “You are living in Czech republic, why don’t you sing in Czech? Why English? You are not in England, sing in your native language etc.” Kinda rude. But with time, they just accepted it and nowadays people are chiller about it.

If your music was a color, what colour would it be?

When my music was a colour, it would have colours of the universe … Dark black with beautiful sparkles and shades of blue and violet. Dreamy and powerful.

If you could cooperate with another famous musician in a song, who would he/she be and why?

I would love to sing some nice duet for example with artists like Amy Lee, Anette Olzon, Marco Hietala, Charlotte Wessels, Tommy Karevik, Elize Ryd, Dani Filth … I really don’t know, there is a lot of amazing musicians I really love and appreciate so depends! I could name you almost everyone, it would be really long list!

If someone asked you about the atmosphere of After Evolution’s music, how would you describe it?

Atmosphere is dark with a sparkle of hope, magical, powerful, emotional and epic. It is apocalyptic about the ancient world far, far away from us so mostly epic!

Do you play live in concert? Do you have some tour plans?

Yes we have some plans for next year and we are discussing that with our manager. But we do not have exact dates right now. Everything is now in a planning phase!

So firstly I would love to thank you for this wonderful interview and thanks to all the readers for taking time to read it! I would love to invite you to listen to our album and check out our video clip if you haven’t done it yet! Thank you so much for your support and love and we hope we will see you soon on stage!