Swedish/Swiss melodeath/thrash combo Katapult unleashes the video for “Sweetheart Come,” once again created by the band’s visual wizards Florian Moritz and Johan Norström. The song deals with the heartbreaking story of German outsider artist Emma Hauck and the letters she wrote to her husband while she was institutionalized in a psychiatric hospital. Unfortunately, the letters were never sent.

The track “Sweetheart Come” is a part of Katapult’s debut album, Play Stupid Games, Win Stupid Prizes, released last November via Discouraged Records. With the album, the band has made a lasting impression with its aggressive energy, impressive chops, and intelligent songwriting, which has received praise from the press worldwide.

Speaking of the song, singer Johan Norström states:
“The story behind ‘Sweetheart Come’ is based on the real letters written by Emma Hauck, while she was admitted to a psychiatric hospital because of schizophrenia. The story is terribly dark, the letters repeat the term ‘Herzensschatzi komm’ which translates to ‘Sweetheart come.’ The skeleton for the lyrics have been with me for years, but it wasn’t until I received the first draft of the song that I found a fitting musical outlet for the story. We chose to visualize the song as a depiction of what Mrs. Hauck’s reality might have been like, locked into a small room, with the dream that one day her husband would come to get her back home as her only companion.”

Born in a backstage area in Sweden in the summer of 2017, Katapult is the brainchild of Florian Moritz and Johan Norström. As everyone and their grandmother know, not many bands born in backstage areas survive their infancy, but despite being raised in both Switzerland and Sweden, Katapult endured. As time went by, Joel Purificacion was invited to shred some solos on their debut EP, A Fistful of Truth, and being such a good fit, he ended up joining the ranks. Similarly, Felix Bacher and David Stutzer ended up sticking with Katapult while being invited to track bass and drums, respectively, during the production of the second EP, Shut the Fuck Up and Press Play.

The debut album, Play Stupid Games, Win Stupid Prizes, is a merry-go-round of dark emotions, filled with 13 tracks ranging from blistering rage to immense sorrow, all sprinkled with a layer of “go fuck yourself” attitude. Where tracks like “Comfortably Dumb” deal with the hypocrisy of accepting the meat industry, “21th Century Gladiator Boy” points and laughs at all influencers trying to out-stupid one another, “Litany of Spirals” was written during a sleepless night caused by burnout borderline depression, and “Bränn bilder och minnen” is a giant “Fuck you” to that guy from school who is a proud fucking nazi nowadays. To fuel this record with unusual elans, Katapult has utilized the services of a special batch of musicians and their artistry, including vocals, percussion, pedal steel, Hammond, violin, cello, and orchestral arrangement.

For Play Stupid Games, Win Stupid Prizes, no less than six videos are in production as Katapult continues to have a strong visual presence. This is not just a bold statement as band members Johan and Florian both work professionally as filmmakers. Johan is an experienced editor, colorist, and animator, and Florian is an exceptional director of photography. Keeping in mind that the video for their track “Du brinner ihjäl” received awards for its storytelling and cinematography, Katapult has all the intentions to surpass that video with what comes next.

In the meantime, Katapult eagerly awaits their first live performance. The pandemic outbreak and the geographical distance between Switzerland and Sweden have not even allowed all the band members to congregate under one roof. 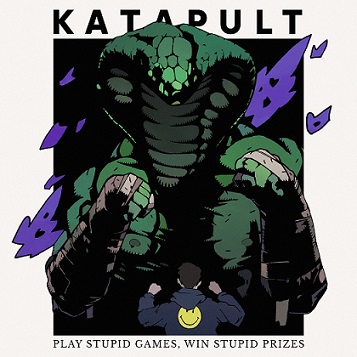