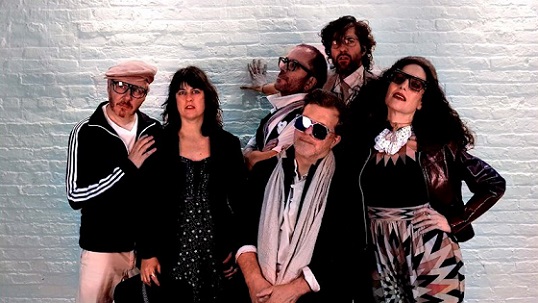 NYC-based indie rock/powerpop outfit Gramercy Arms presents their Americana-tinged single 'Yesterday's Girl', a bittersweet remembrance of love lost and friendship regained. This is the first taste of their 'Deleted Scene' album, scheduled for release via the Magic Door Record Label in early 2023,

'Deleted Scene' is the group’s third full-length album, following 'The Seasons of Love' (2012) and 'Gramercy Arms'. Lyrically driven and rich on vocal-harmony, interspersed with elements of 60s sunshine pop and folk-rock, Gramercy Arms is a revolving collective of musicians and artists masterminded by Dave Derby (The Dambuilders, Lloyd Cole),

“Being asked to sing one-half of the lead part on 'Yesterday's Girl' was a wonderful surprise. I showed up at Magic Door Recording prepared to do backing vocals. It was Ray Ketchem who suggested a duet during the session. It's an honor to sing the female lead part on a Lloyd Cole/Dave Derby penned song, originally written for Darlene Love,” says Renée LoBue.

Lloyd Cole further notes: “As I recall, we wrote very quickly hoping to channel Springsteen channeling Spector, with copious help from Blanton’s of Kentucky. I’d completely forgotten it until Dave presented this version and it feels like I won the lottery. It is wonderful. Very happy to have my name in the credits."

Inspired by the artistic heyday of ‘70s and ‘80s-era New York City, Gramercy Arms makes addictive indie pop - exquisite hook-laden melodies filled with lyrics that will have you floating back in time, remembering your favorite mistake.

'Yesterday's Girl' is be available across online platforms, including Apple Music and Spotify. It is also downloadable via Bandcamp, where the album can be pre-ordered.