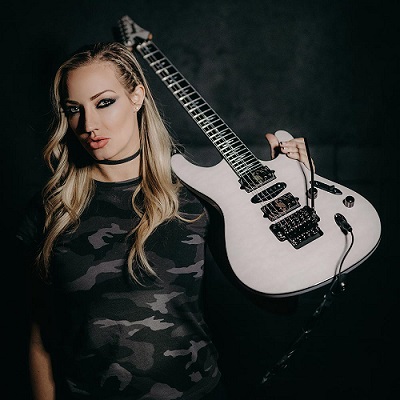 Nita Strauss, former Alice Cooper and current Demi Lovato guitarist, is going to undergo a surgery for her torn meniscus. This surgery will take place in late December, seven months after she got injured while on the road with Alice Cooper.

Strauss posted the following video update on her Instagram: "I have a little knee update, for those who've been wondering. I did have my pre-op last week, and, unfortunately, it didn't go exactly as I hoped it would. According to my doctor, eight months of performing on a torn meniscus did not do my any favors. The injury has not improved; unfortunately, it's gotten worse. So surgery has had to be pushed to the end of the year — after Christmas, after the last Rams game — and then it'll be a full month before I can do anything at all again. So no shows, no performing, no nothing. I'm super disappointed at that; I was hoping to already be on the mend by now. But it is what it is". Strauss is the in-house guitarist for Los Angeles Rams football games since the team moved to SoFi Stadium in 2020.

We wish Nita Strauss the best.