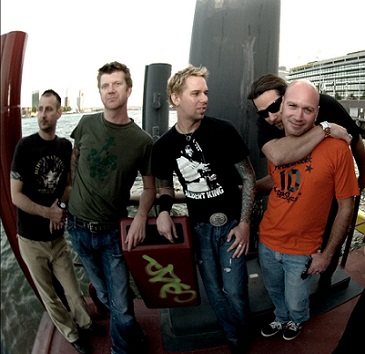 Hermano, the cult Californian stoner rock band formed by John Garcia (ex-Kyuss), Dandy Brown, David Angstrom, Chris Leathers (Supafuzz) and Mike Callahan (Disengage), joins the Ripple Music roster for the reissue of their entire back catalogue as well as the release of an exclusive 10" record in 2023.

Entirely remixed by David Barrick (Black Stone Cherry, Kentucky Headhunters) and mastered by Ty Tabor (King's X), the updated Hermano catalogue has been dynamically enhanced and will offer some exciting new features and twists such as never-before-heard live and studio tracks. "We are ecstatic to share these reimagined versions of our albums with friends, fans and family, knowing that the listening experience will be as refreshing for you as it has been for us," says the band.

About signing to Ripple Music, Hermano comments: "Hermano is thrilled to be able to work with Ripple for the remix/remaster reissues of our catalogue. A handful of years ago, when our agreements with the distributors we had been working with for the original releases expired, we knew that we wanted to do something special with the albums. It took some time to find the best home for our music, but after meeting with Todd Severin, we knew from his enthusiasm, pure love and respect for music and concepts for the reissues that Ripple was the perfect fit for us. We are truly honored to be working with Todd and the amazing team at Ripple. After months of searching through the Hermano vaults (ie crawlspaces, closets, attics, storage buildings and cigar boxes) across the US and EU, tracking down master tapes that we thought had been lost or damaged forever and bringing new life to our music through the efforts of Ripple Music and an enormously talented group of engineers, we are eagerly looking forward to beginning the process of reissuing our albums starting in 2023. 'Only a Suggestion', 'Dare I Say', 'Into the Exam Room', and 'Live at W2' as you’ve never heard them before... We can’t wait to share the experience with you." — John, Dave, Chris, Mike and Dandy.

The story begins twenty-four years ago in a second-floor apartment located in Covington, Kentucky. The details are of a band that never was... There are those who already know the story. They remember the first time they heard about Hermano, the whispers of a super-group that had tracked an album backed by Frank Kozik and set to be released on Man’s Ruin Records. When Kozik’s label closed shop before the album could be released, those who knew of the project waited through nearly four years of hurdles and contractual obligations to be cleared before they could hear an album that not only lived up to its promise but also established itself as one of the most influential heavy blues (aka stoner rock) collections ever recorded.

The legend of Hermano is well documented, found in publications far too many to count when the group was most active a decade and a half ago. To summarize those accounts, Hermano first formed when David Angstrom (Supafuzz), Steve Earle (Afghan Wigs), Mike Callahan (Disengage), and John Garcia (Kyuss) agreed to lend their talents to the session's producer Dandy Brown had scheduled for December of 1998. Coming together for the first time in Cincinnati, the initial riffs that Brown had constructed were arranged by the newly formed group and would become the foundation for the band’s debut album "Only a Suggestion". It is also well documented that before entering Ultrasuede Studio in the winter of that year, the members of the band had never been in the same room together, but with the very first notes they played there was a realization that they had struck upon something special: a musical outlet for each of them where egos were absent, the core of their creativity was free from industry pressure, and where they would quickly develop friendships that would become the central force behind the band.

Over the next decade, Hermano would go on to release three studio albums ("Only a Suggestion", "Dare I Say" and "Into the Exam Room") and a live record (Live at W2) showcasing the force the band had become in the heavy blues market. Embarking on a series of now-legendary sold-out live performances in the United States and Europe, Hermano continued to grow a legion of dedicated fans and critical acclaim. Following the European tour in support of their debut album, Steve Earle’s departure to pursue his solo project opened the door for veteran drummer and lifelong friend of David Angstrom, Chris Leathers (Supafuzz), to step in during the band’s performance at FestiMad in 2004. Performing on the band’s next two studio albums and their live release, Leathers addition to the group cemented another chapter in the friendships established during the group’s formation six years earlier.

Recording albums and touring when they wanted to, not because they were contractually obligated to spend months on the road or in the studio, Hermano quickly became known as the greatest band that never was, a tongue-in-cheek tip of the hat to the impact and influence of a band that consistently refused to operate on anyone’s schedule other than their own. Now six years removed from Hermano’s last live performance at Hellfest in the summer of 2016, the band is thrilled to announce that they have recently acquired full ownership of their entire catalogue and have committed to sonically updating the collections through remixing, remastering, and reissuing their three studio albums and live collection with San Francisco based Ripple Music.