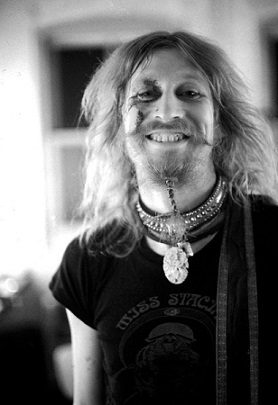 A founding member of the space crew has died: Nik Turner passed away on November 10th, 2022, at the age of 82. Nik Turner (saxophone, flute, vocals) was a prominent member of the legendary Hawkwind, a pioneer of psychedelic rock, a master of space rock. He founded the band together with Dave Brock and took part in the band's most successful albums, such as "In Search of Space", "Doremi Fasol Latido" and "Space Ritual". After his departure from Hawkwind, he continued to play a classic Hawkwind repertoire with various formations, such as Hawklords and Space Ritual. He was also involved with Inner City Unit, Sphynx and guested on works by Robert Calvert, Psychic TV, Mother Gong, Sham 69, Sting, The Stranglers etc.

In a message on his Facebook page, a representative of the musician said that he died peacefully at home on Thursday evening (November 10th, 2022): "We are deeply saddened to announce the passing of Nick Turner, the Mighty Thunder Rider, who died peacefully at home on Thursday evening. He moved on to the next stage of his space journey, guided by the love of his family, friends and fans. Keep an eye on this space to learn about its arrangements".