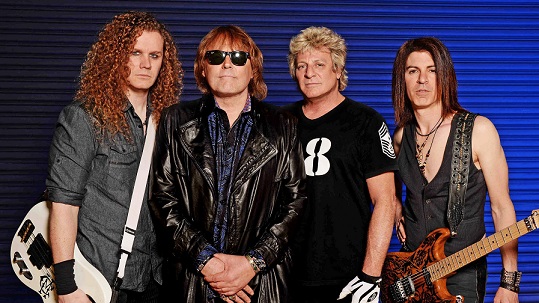 Dokken has finally finished the recordings of its new album - the group's first since 2012's "Broken Bones". Don Dokken spoke to a New Yorck classic rock radio station and said: "We just finished our new album. We finally got it done, which was hard with COVID and all the guys living in different states, and I couldn't play guitar. But luckily, when we did 'Broken Bones', our last album, Jon [Levin, guitar] and I had written, like, 12 or 14 songs left over, so we picked through 'em and picked the best and wrote some new ones. And I got my pen and paper out, and we'd write on the road and we'd write over Skype. I'd never recorded an album over Skype before. You send a track to the bass player, he records it and sends it back. I send a track over to BJ [Zampa, drums], his house, and he cuts the drums. Then I hop on a plane from Santa Fe, come down to L.A. and stay at Jon's for a few days. And we'll just bang it out. And I just go into producer mode and try to create the best songs. And we're really happy with it."

When he was asked when the new album will be released, Don Dokken said: "Well, it's coming out on Silver Lining [Music, the label owned by Thomas Jensen, one of the founders of Germany's Wacken Open Air festival]. And we just don't know what to do because this COVID thing, it's like… Now they've got the new [variant] — omicron, or whatever it's called. It seems like every month there's a new variant, and we're supposed to do a European tour in the spring — like, eight countries — but it's out of control there."

Previously, Don Dokken was asked about the musical direction of the new songs in a The Metal Voice interview and he said: "We're kind of going retro. I mean, look, you write what you write as a musician — your life changes, the world changes, you write what you write. You're influenced by new bands and other music. But I know where my bread is buttered as far as the classic Dokken sound, and Jon's really good at doing that. And so I said, 'I think we should write a record between the lines of 'Tooth And Nail' [1984] and 'Under Lock And Key' [1985].' And that's kind of the direction I'm writing in right now."