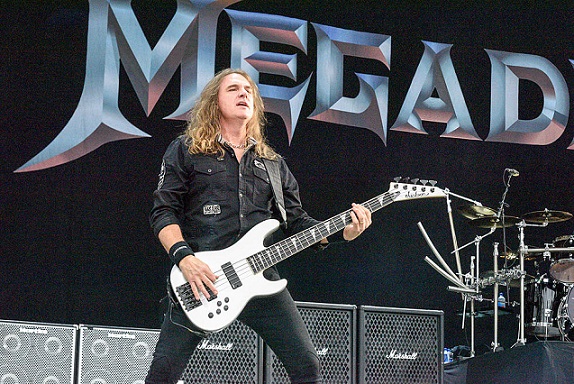 We all shall be ready for the 16th studio album of Megadeth! The band's bassist, David Ellefson, has just returned from Nashville, Tennessee, where he took part in the initial recording sessions for the band's new album. Let's see what Ellefson told in an interview with The Metal Circus.

"Recording happens in various stages. First, the basic tracks, which, for us, is bass and drums. And then the rhythm guitars, and then starting to put some vocals down and solos and all the embellishments of extra guitars and whatever layers of melody and stuff. The main thing, the first thing we wanted to get done was drums and bass, so me and Dirk (Verbeuren, drums) were working on that this last week." And continued: "So, look, it's underway. I think that's the good news now — the album is officially underway. We've been writing it since late 2017 — our last show was in Buenos Aires, Argentina back in November of 2017. And then the intention from there was just to get started composing. But it's on its way — the ship is sailing, which is great". Regarding the sound of the new album, he said: "There's a saying, you have your whole life to write your first record, and then you have about a year to write your second one. And once you put the first one out, the die is cast — now there is sort of a sound that people expect when they hear the next record. And if album two is too much of a departure, people go, 'Eh, this is kind of weird. I like the first one better.' And I think with Megadeth, this is album sixteen, so we have a lot of experience doing this. We've been able to expand and try a lot of different things". Ellefson concluded: "Look, there's been some missteps — of course — but you have to also, in our opinion, be bold and be adventurous and try some new things. If you just do what you always did, it's, like, why put out another album? Everybody can just go buy the previous one. You're dealing with the creative. Yeah, there's business and there's marketing and all this stuff. But [it's called the] music business. We're dealing with music; the business always comes after the music. So I think for us, what we find is that when we're in a room and we're playing something, and if we're all going, 'Yeah, that's freaking awesome,' if we like it, chances are you're all gonna like it."