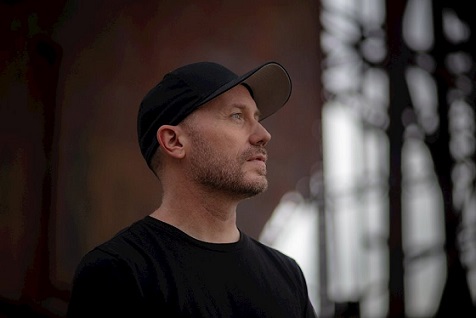 Indie rock, alternative rock … labels to define music … A Shoreline Dream, the name of a indie, alternative rock band … which with the its most recent album, “Loveblind”, is here again to haunt our mind and heart. The band’s distorted, melancholic sound shakes up the waters of indie, alternative rock music and Myth of Rock, thrilled and excited, came in contact with Ryan Policky (vocals, guitars), who gave us his polite, interesting answers!

Give us a short biography of A Shoreline Dream please. Why did you name the band “A Shoreline Dream”?
Being at the near center of the US ourselves, and watching the madness of humanity striving to spend as much money as they can to live right on one of the most volatile parts of the planet inspired the name. The shore is one of the most beautiful places to visit, yet in our mind it’s almost the same as a dream, since we rarely experience it. The sounds, visuals and overall mood of our music has always had a similar feeling. Endless, while bordering on explosive.

“Loveblind” is your sixth album. How do you feel now that you are releasing this new album?
To see it come to light was a huge relief considering how difficult life itself has become. Music itself is my therapy. What I sometimes feel as my meaning in life, and to be able to piece all the puzzling parts of who I am into a replayable audio source releases so much of the tension built up inside. “Loveblind” was one of the most introspective bodies of work I’ve mixed myself into over the years, and I can finally breathe again knowing it somehow worked itself into cohesion.

Where would you trace the differences between “Loveblind” and the previous albums? Have you evolved as a band?
A Shoreline Dream has been on an evolution from song to song, album to album. We started as a floaty mix of shoegaze and goth, and have gone everywhere from pure electronic, working with masterminds of the craft, aka Ulrich Schnauss, and have also seen ourselves dive into gritty prog rock. I think it all comes together as a whole, even through all these evolutions based on the depth of the instrumentation and the layers of vocals. We may have sounds we are still experimenting with, and ideas that come out on the fly, but it all has this vibe that could only be A Shoreline Dream.

Describe the recording and the production process of “Loveblind”. Who did the mixing and the mastering?
The process was a 6 month exploration of sound at my (Ryan Policky) home studio. We tend to start by simply coming together and recording what we are currently feeling and the rhythms that reside within. These ideas are fleshed out over time. I have always taken those “jam” recordings and fine tuned them until they hit the sound imagined that represents our current overall mood. So the songs have rarely ever have left the place they are created in. A few occasions we’ve worked with some outside sources, such as Ulrich, Mark Kramer & a few others, but I generally handle all mixing and mastering, as was the case on “Loveblind”.

Which are the ones who write the music and the lyrics? What does inspire you to compose and create?
The music itself is a combo between myself and Erik Jeffries. The music writing is all in the jam space, or on the fly in a recording session. I like to keep it loose and allow it to come naturally rather than spending weeks rehearsing and creating a somewhat robotic approach. Lyrically I have been at the helm. All based on my experiences and the current state of the overall vibe. Story is of course an important element, and I for sure have quite a few of those to tell. It has been quite a strange voyage, and don’t mind sharing those experiences.

How would you define the music of A Shoreline Dream? How do you feel with the label “indie rock”?
I would say we are composing in a progressive, dark wall of sound style. I know we have been in the realm of Shoegaze, which I am a fan of without a doubt, but I think we have a little more to sprinkle into that formula. To me “Indie rock” defines whether a band is truly doing music business without the support of major labels, so I don’t really define that as a style of music, as much as it has become one. To be honest I don’t even know one single band I would ever define as “indie”, even though we would technically be that since I put my home up to start our label as a business, and handled management through our history.

How do you sound live in concert? Is it easy or difficult to reproduce your studio sound live on stage?
We have traditionally been a very loud experience, with tons of energy and lots of explosions. It’s never been difficult to reproduce live, and I think that helped us in some of our most important years of establishment. We have toured so many times and have done many radio appearances, and I always felt we were able to make those match our produced sound.

Do you have any plans for a tour?
No plans…. Yet! We need a dedicated percussionist and would need to get back in the groove after all the downtime of the pandemic. I have been asked many times, but alas it will most likely be another year before we could pull it off again.

How did the Covid-19 pandemic affect you?
The pandemic just put me in this mode of producing. Trying not to waste time thinking about what could be going on, and just doing something. I have A Shoreline Dream, plus another project named “Alien Gothic” I have been delving in over these weird years.

If you could cooperate with a famous musician, who would he/she be?
Interesting question, and I actually have done it already. Ulrich Schnauss was one of my faves before we met him, and we wound up working on many tracks together as A Shoreline Dream. So in that aspect the dream kinda came true!

If your music was a colour, which colour would it be?
Black & Blue, just like my soul.

Your future plans?
We are working on new material as we speak. Hoping to have another album ready this next year, and I also plan to try my hardest to getting one of these albums on vinyl, without going broke doing it. Right now we have 2 of our albums up on diggersfactory.com as crowd funded releases, so I have been pushing for those to actually get fully funded! We of course could use the help!

Your message to your fans?
Without the support we would be nothing. We hope you continue listening and we are doing the best we can to try and get ourselves back out there to see you live once again! Many thanks for your time putting this together!