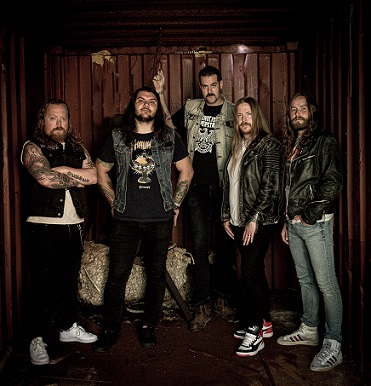 Screamer are releasing a new album soon, titled “Kingmaker”, an album, which stands as a fantastic heavy metal release. The Swedes deserve to be proud and optimistic for the future, for sure. Myth of Rock contacted Dejan Rosić (guitar) for an interview and Dejan informed us about everything new and fresh in Screamer’s camp. Scream for Screamer, please!

Could you introduce yourselves and the band’s history?

Hi, I’m Dejan the guitar player in Screamer. The band started in 2009 and since then we have released four albums (“Adrenaline Distractions” 2011, “Phoenix” 2013, “Hell Machine” 2017 and “Highway of Heroes” 2019) we have always been a hard touring band and we are now gearing up for our fifth release “Kingmaker” that is set to be released 13th January 2023 and a world tour will follow.

Congrats on signing with Steamhammer/SPV, a label that has worked with legendary bands, such as Running Wild, Rage and Sodom. How did the deal happen? Can you give us any details about it?

Thank you, we actually didn’t contact any labels until the album was finished mixed and mastered. After that we reached out to a couple of labels and Steamhammer was the one we felt most confident signing with and felt that they had a good plan in taking the band forward.

“Kingmaker” will set to be released next year, most precisely on the 13th of January, 2023. Ten tracks of pure heavy metal, with a bite of 80’s power. Perfection! What were you main inspirations for this one?

Of course we are always inspired by the old heroes of heavy metal and that will never change. A lot of our inspirations came from working with a producer on our previous album Highway of Heroes and we learned a lot what our strengths as a band is. We did pre production with Jakob Herrmann for a couple of songs on “Kingmaker” and that gave us even more tools and inspiration for writing and recording.

Which are the music trademarks of Screamer in your opinion?

Sing along choruses and melodies I would say. We really worked hard on that on “Highway of Heroes” and we carry that on for “Kingmaker” in an even bigger way!

Like the previous ones, we can hear a diversity in the songwriting. Is “Kingmaker” the continuation of the previous records?

Yes and no I would say, haha. Our influences are rooted in heavy metal but we all grew listening to a bunch of different music. But we always try to write music that we like and even if there is diversity in Kingmaker I see it as a good thing even though I think the songs have a common thread through out the album.

When and where was this record recorded? Describe the whole recording and production process (mixing, mastering, etc.).

We started with drum recordings in the fall of 2021 at Top Floor studios in Gothenburg with Jakob Herrmann who did an amazing job with capturing and coaching Henrik throughout the recording. Then we continued to record guitars and bass at our own studios where I engineered/produced the recordings. Vocals where recorded with Christian Svedin in Kinna. The record was mixed and mastered by Henrik Udd in Gothenburg and he really gave the album the finishing touch it needed and made it big!

How is a typical Screamer song composed?

Usually it starts with a riff or a melody and then we make a ruff version of a song and send it to our singer Andreas and he puts vocals on it and then after that we build a songs and try fit all the pieces together.

Could you tell us the story behind the meaning of title of the album (“Kingmaker”) please? Where do the lyrics of the new album refer to?

It comes from the title track, it was one of the songs that finished early and we felt that we liked the title Kingmaker so we went for it. Even though the album is not a concept album but if you get very nerdy you could easily tie the songs together.

You have released a live album (“Live Sacrifice”). Give all the info about this special release.

We recorded a bunch of the concerts we did during the Highway of Heroes tour that was unfortunately cut short due to Covid. And we felt when covid hit we wanted to give our fans something special since we couldn’t tour. Fun fact the album was released on my and Henrik’s own label Steel Dragon Records.

If you could cooperate with a famous musician, who would he/she be and why?

Tough question, we are big fans of Seven Sisters from London so we were fortunate that Kyle McNeil who’s the singer and guitar player could help us laying down some awesome synths on the song the Traveler. So I would say him and in my book he’s famous!

I think we had the same troubles as every band. But we used Covid to really figure out what to do and worked hard so we were ready when the world opened up again.

You guys are considered the newest sensation of NWOTHM, alongside Eternal Campion, Night Demon and so on. How does it feel for you?

It feels good, there are so many good and talented bands playing good music so being mentioned along them is always an honour.

In 2023, you will be on tour with Hellfire, in America. Congrats on that. You have also tour dates on Europe. How does it feel to tour with them? Could you give us more details about the tour in USA? Will you have more dates in Europe?

We did the tour this year (2022) with Hellfire and it was a blast, we love those guys. The tour was great and we can’t wait to get back to the US. But you know what happens on the road stays on the road, haha. We have an upcoming EU tour next year (2023) to support “Kingmaker” so the EU will be covered that’s for sure!

Could you give some words for the fans, please?

Big cheers to everyone, hope to see you all on the road and hope you like our upcoming album Kingmaker that is set to be released January 13th 2023 on Steamhammer! Cheers.