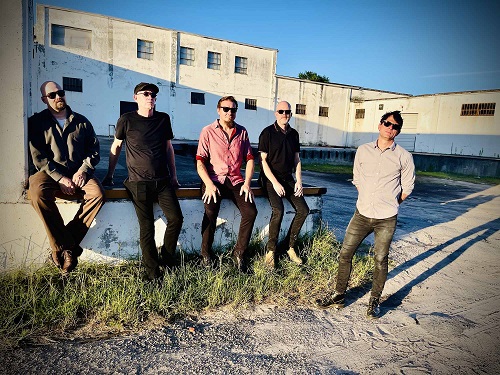 Candy Coffins is a post-punk band with quality, attitude and passion. Its music sounds pretty, enchanting, soulful and sombre, its lyrics have a deep meaning and the new album, “Once Do It With Feeling” has a strange beauty and magic, so attractive, so palatable. Having listened to the new Candy Coffins songs, I confess that I am now a fan of the band – I had a nice discussion with Candy Coffins mainman, Jame Lathren (vocals, guitar), and below you can read what was discussed!

You have just released a new album (“Once Do It With Feeling”). How do you feel about it?

It is a giant catharsis. From the time we started the recording process to getting the album released on streaming sources and on CDs was about 18 months. I am exacting in what I do in the studio and I didn’t want to compromise that, but I was also anxious to share the songs with listeners.

How much do you think you have progressed in this album compared to your previous albums? Why?

Oh wow. So much. The songwriting has improved, the playing is top notch, the concept is fully-formed. Working with John Furr of Pow Pow Sound as producer afforded me the opportunity to take time in the studio to create the full vision I have for each song, which is something I have always wanted to do. It almost killed us, but we pulled it off beautifully.

When and where were the songs of the new album recorded?

My close friend Furr and I had been plotting and scheming to do something together for a long time. At one point, when talking during the Covid19 pandemic, John came up with the plan to bring the studio to the band. He set up his recording equipment in our rehearsal space, and those recordings led to “Once Do It With Feeling,” which he engineered and produced. Recording started in April 2021 and wrapped in October 2021.

Who did the album production?

The album was produced and engineered by John Furr. We intentionally had him work with us as a producer, which I had never done. It was interesting to hear his input on the songs which pushed me to think of them in different terms. The mixing was done by David Barbe at Chase Park Transduction (Athens, GA). David recorded and mixed our “Somehow Misplaced” EP. The mastering was done by Dave Harris of Studio B in Charlotte, NC.

Which were your priorities, as far as the sound of the new album is concerned?

As many artists do, I was chasing the song in my head, attempting to reproduce it as closely as possible. Beyond that, I wanted to leverage the studio as an additional instrument.

Which are your favourite songs of the new album and why?

Well, I love them all – they are all my babies, but I especially like how “Another Kiss” and “Peel Off The Stars” came out. I think that they embody elements of the original song that I imagined in my head. To me, they symbolize one of the most important aspects of life – they capture and embody the depths of human emotion.

Who is the main composer in Candy Coffins?

I am the songwriter for the band. I am fortunate in that I work with amazingly talented and creative musicians. They can read my intent very well, but they are apt at making suggestions or changes in their approach to the songs to get us closer to great.

What influences you, when you compose new music?

I think personal experiences and personal emotions drive me to write songs. I can be in a terrible mood, sit down and write a song, and come away feeling totally different. Also, at times I am attempting to capture emotions I see in others.

Who is the one who writes the lyrics?

I write the lyrics.

Where do the lyrics of the new songs refer to?

Well, I don’t want to give too much away here, but I really enjoy building sometimes disparate lyrics into a somewhat cohesive, understandable scenario or storyline. It is one of the most rewarding parts of this band for me.

Why did you give this title to the new album?

It is a line from the song “Peel Off The Stars.” As Furr and I worked on preparing the album for mixing, the sentence took on a number of meanings, both from the perspective of the album content, all the way out to the studio concept of “If you’re going to do it, do it right.” We felt thematically it captured the overtones of the album.

How would you describe your music, to somebody who has never listened to your songs?

I would rather someone listen with fresh ears and no categories. But if pressed, I could list some of the artists who we respect and with whom we share some similarities like Joy Division, The Cure, The Psychedelic Furs, The Afghan Whigs, The Cult, The Brian Jonestown Massacre, Spiritualized, Black Rebel Motorcycle Club and Interpol. I believe we are in our own independent sub-genre of uniqueness, though.

What feelings of yours do you want to express through your music and lyrics?

I want the atmosphere of the song to emulate an emotion in a way that it draws the listener into that emotion, if only for the length of the song. I work to make my lyrics pleasing to the ear, but also clever. I love the art of weaving words and lines together to make them into something new and cohesive.

What does the cover artwork of the new album depict?

It depicts a photograph of a person, cropped to include from the shoulders to the nose. Bonus: Unfold the cd cover and lay it flat for an added feature of the artwork.

How is this artwork connected with the music and lyrics of the new album?

When I saw it, it reminded me of the warm tones and style of a Renaissance painting and in an odd way, a link to the New Romantic elements in our music. I like the ambiguity of it, yet how it can be tied directly into the theme of the album.

How did the recent live shows in support of the new album go?

Shows have been good, thanks for asking. I now have people coming up to me asking if we are going to play certain songs, asking to have my photo taken with them. Those small things go really far having worked on this so hard. It is rewarding.

Are you satisfied with the fans’ reactions to the new songs?

Absolutely. One of the things I wanted to do with this release was to issue singles in a way to call attention to how diverse we are, and it worked. “Every Day A Fresh Atrocity” is a good primer for people who know nothing about us. Then “Seaside Girls” came out and showed a different side of the band. When people reviewing the album bring this up it is to note how there is such diversity in the songs on the album, but yet it is all cohesive and makes sense together. It is Candy Coffins. I really like that everyone seems to have a different favorite song on the album as well.

I don’t think many people foresaw the impact the pandemic would have on the music scene. Personally, we had some of our biggest regional shows cancelled and took precautions such as postponing rehearsals for the first two months. As it became apparent that the pandemic was going to be something we needed to adapt to, I made adjustments to our rehearsal space to allow for increased air circulation and distance between band members so we could safely resume rehearsals. In order to remain relevant during a time when we could not play live or record at a studio, I decided to record a performance without an audience and premier it online. Thus, “Live From A Distance” was born. It turned out extremely well, thanks to my friends at DV8 Productions, and garnered immense positive feedback.

If you could travel in time, to which period of time would you like to travel?

Honestly, probably back to when I was like twenty years old.

I would like to start over there and pursue music in earnest like am now, but with a longer runway. I was always in bands, and I had the tenacity and passion about it, but I didn’t have the direction and the insight, the knowledge, or the money. It is said that hindsight is 20/20.

What do you think of technology and internet, and their impact on music? How important do you think internet is for the bands and the fans?

Social media is the necessary evil for musicians and bands. With regards to technology and its impact on music, its water - it just permeates into everything. Every aspect of what I do has tentacles into technology. For instance, technology is likely the only way we would have found out about one another, and I am thankful for that. I do willfully stay away from a lot of digital equipment that has hundreds of choices. It causes decision paralysis in me. I’d prefer to have a very limited number of options so that I can contemplate, “How can I make something fantastic using only these limited things?”.

In every endeavor I take on, I innately push it as far as I can, and Candy Coffins is no different. I truly believe that we have something new to offer that seems vaguely familiar, but is vital, new and refreshing at the same time. I want to get our songs into as many people’s ears as possible and then bring the music to them via live performances. I would really like to explore touring in the UK. I think our music would do really well there.

Send a message to the readers!

I want to tell anyone who has read this interview, listened to any of our songs or watched any of our videos, not to mention has come to our shows, bought merchandise or wears our shirt – THANK YOU. You are the fuel that keeps us doing what we are doing. 🖤