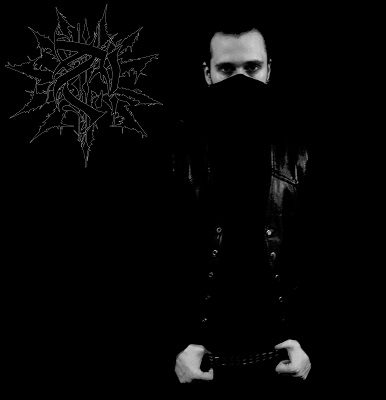 Chaoist is a Serbian one-man project, which flows in a black metal music style and has just released its debut EP, "Annul". The black metal landscapes of Chaoist are strange, mysterious, but, above all, enchanting and mesmerizing. Myth of Rock has just discovered this promising black metal prodigy and conducted an intriguing interview. It is obvious that Chaoist has things to say and offer!

Give us a biography of Chaoist.

As of yet, there isn’t much of a biography to Chaoist as such. It would perhaps best be described as a part of a whole, whose story in this world started becoming concrete in 2014. My musical work was at that time being released under the name Joys of Life, manifesting in two full-length albums, namely ,”Dem Tod sei Dank” via Depressive Illusions and ”Ausweg/Existenzfeind” at Jesboligakurac records.  I look back fondly on those two releases and stand by them fully. As time changes though, so do the tools and weapons of the Art, and in that sense the change of the project’s name was necessary as to more accurately reflect and also carry even further which it has become, perhaps in broader sense than only musical. At latest, by the time of writing the songs, the next step was already being taken, and in that way Chaoist was spawned. Aptly named, the coming EP ,”Annul”, which is released on the 28th October, is a symbol to this change on some levels. Its release also marks the partnership with Wormholedeath.

Chaoist is a one-man project. Why didn’t you select some other musicians to form a regular band? Is there a chance you will do that in the future?

Indeed there was a live setup in working for Chaoist, but even after about a year, it never made it past the rehearsal room. We all agreed that in the particular arrangement we had at the time, it simply didn’t carry the full force it is meant to and therefore the decision was made that I carry on, alone. I am not against the idea of live performances by any means, although it is not the highest priority. With the right people and circumstances, I am certain that it might happen further down the road.

How would you describe Chaoist’s music style?

I am not someone that will put out rigid labels on music in general, nor do I feel that it would be of any practical benefit. Chaoist, in its current form would be best described as black metal, even though I believe that this medium is a product of the Inspiration, and not the other way around. Time will tell to what form it evolves in the future in order to best express and evoke what it is meant to.

How is a Chaoist song composed?
There isn’t a definitive way I write, although I am making an effort to include a regularity in time that is entirely dedicated to the process. Doing that has lately proved to be very fruitful. The Spark, an idea, a feeling, an image or even a more or less abstract concept appears and builds up consciously or often subconsciously, so it may take a somewhat cognitive form and surface in a liminal point in consciousness, however this ,”state” is brought on. As it rises, it is then freed into the world as it is translated musically and lyrically into what is Chaoist.

Which are your music influences? Name some of your favorite artists/bands.

I believe that all music one listens to is in some way inspiring, or at least it should be, therefore there are truly many that can be mentioned. Besides the black metal bands that this inspiration is drawn from, I have to mention Return to Forever, Perihelion and Vágtázó Halottkémek. One of the bands I will always return to is Ondskapt. Other, more contemporary acts that I respect and am extremely fond of are Death.Void.Terror., Amnutseba, Skáphe, Thy Darkened Shade and Acrimonious, Shaarimoth and Siculicidium to name a few.

The lyrics are the last salve, the anointed surface of the Intent. That which together with the music carries the maeteria, the interaction between inner and outer - the Other that is the true and greatest Inspiration of the Work.

Why did you name the project Chaoist?

As the Work progressed, not only in composition and writing, certain aspects had to be left behind to move forward. Just as a snake sheds its skin to grow, so was the necessity to leave Joys of Life behind to infect the wounds it created, and continue as Chaoist.

You recently signed with WormHoleDeath. How does it feel to have a deal with a renowned metal label?

I can only report positively about the partnership with WormHoleDeath. At every step since out paths have crossed, the cooperation and the understanding on both sides was on the highest level and the release of ,”Annul” succeeded in a professional and planned out way, sparing neither time nor resources, tailored to the needs and demands of the project in question. It feels not only like a step forward, but much more!

Which are your ambitions for your newly released debut EP, “Annul”?

There are no concrete expectations as such, when releasing an album on my side. The highest goal is that it fits in idea and form, meaning that the end product is the most suitable vessel it can be, one that appropriately carries the impulse and the message it is meant to. For me, the energy and intent is spent in the actual creation, rather than what it achieves in the end, so that these ,”achievements” may act as building blocks for the following actions.

How did the COVID-19 pandemic affect you as a musician and as an individual?

All in all, it didn’t affect me much. Since Chaoist is a one-man band I write and record in my home studio, therefore, except a few nuisances that led to minor delays, there wasn’t really anything major that changed. There were only short periods of total lockdowns in my country, mostly during the weekends, therefore, a great part of the pandemic I was even going regularly to my workplace instead of doing home-office. Except these things however, there was nothing worth mentioning for me personally.

What do you think about the war against Ukraine?

In an age, where every aspect of life is slowly becoming politicized, as was the case similar in earlier history with the Christian religion being forced upon the ”heathen”. A tailored subjective truth is again and again being presented as an idea that is often even openly called ”supreme” to that of others.  So to answer your question, as with war in a broad sense, I view it as being a play of filthy politicians and their mass control schemes that in the end only serves them. Philosophically speaking, in the course of history, we can oftentimes see an evolutionary leap or at least a step in some direction after major conflicts. I also believe that one of the steps is bound to break the circle, or at the very least, further its breaking.

How are things for metal music in your country (Serbia)?

There were some pretty great releases recently, especially regarding black metal. Only in September, Praznina re-releases its two EPs from this year via Hammer of Damnation, and Aura Mortis has dropped its full length “Aion Teleos”. Be sure to check out both bands for some inspired and honest Art!!

The Work continues. Currently the next release is being prepared, the writing is mostly done, and soon the studio sessions will follow.

Send your message to the metal fans!

Thank you for the support! Stay tuned for the release of the CD version of “Annul”. Until then, you can find the EP on the following link digitally: https://orcd.co/annul