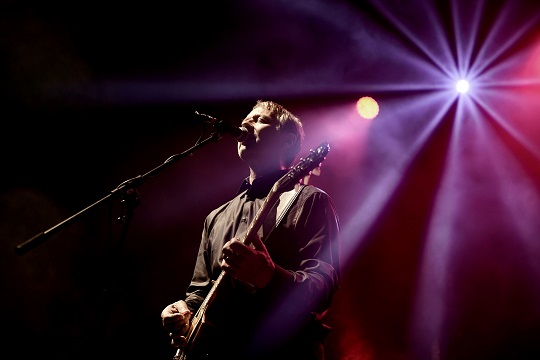 Pink Turns Blue, the post-punk veterans from Cologne, Germany, are traveling now all around the world, playing live shows in several big cities. Their latest album, “Tainted”, still sounds so palatable, so beautiful and charming, and its follow-up “TAINTED Tour 2022 EP” keeps up our interest. Myth of Rock had a nice chat with Mic Jogwer (co-founder/vocals, guitar), whose answers were more than interesting.

With additional tour dates announced for select European locations, let me ask - how has the “Tainted 2022 Tour” been going so far? What memories does this tour leave to you? What do you remember from your concert in Athens?
We are seeing more young people than ever before. Girls and boys around twenty in all colors and shapes. They have their own fashion code. Colorful hair, a mixture of wave and hipster. Could well be that they have found us on Youtube and liked the videos. When we play songs from “Tainted”, they dance to those songs. And when we play our classics from the ‘80s, the old guys and girls are singing and jumping along. If I remember right, Athens was pretty packed with people dressed all black. In the US we have a mixture of all kinds.

Pink Turns Blue has just released the “TAINTED Tour-2022” EP. Can you tell us about this release? Would you say it’s kind of a continuation of your motif from last year’s album?
The “TAINTED Tour 2022 EP” is a mixture of bridging the time between the album release and the North America and UK tour. Shows got postponed and we feared that the time between the album and the shows became too long. So the EP is a reminder of the album theme and also consists of songs that were written in 2021, but were not yet finished to end upon the album. Definitely ‘Not Gonna Take It’ and ‘We Still Could Make It’ have the same spirit of rage and dissatisfaction with how us humans handle things currently.

Your latest album was “Tainted”. How do you see this album now? Would you change something to it, if you had the opportunity?
Of course we would like to change things. But is good that there is a release date and you can’t anymore. Often changes don’t make a song better. As a musician you have the tendency to overproduce and suck all life and magic out of it.

There have been a lot of definitions of your music style, post-punk, dark wave, alternative rock etc. Which is your music style, in your opinion? How would you describe your music?
For sure post-punk is the genre we are most related to. Coming from the 80s, and having grown up being either a ‘punker’ or a ‘popper’ many of my peers decided to walk on both sides. So our music has a punk attitude (everybody can do it, two easy chords only) and a pop side to it (melodies), but always a bit on the downbeat and sad side of things. Simple minds do rage or party. Complicated characters are difficult to satisfy. Somewhere between madness and arrogance.

Which were the bands that influenced you in the very beginning?
Hüsker Dü, Joy Division, Siouxsie and the Banshees. But also Laibach and The Jesus and the Mary Chain.

What music do you listen to nowadays?
I love to listen to young and unknown bands. Definitely still on the melancholic and sad side of things. Ideally with a very characteristic voice and own way of singing and even better with a guitar and a bass guitar. I guess you would call it Cold Wave or Minimal Wave -mainly Post Punk from bands that formed within the last ten years.

Why did you decide to name the band after a Hüsker Dü song?
Because that was my favorite song then. Very grungy and rough, but with a wonderful melody. Sung in a way that made my heart stop.

Your music has a sad, melancholic feeling. Which feelings of yours do you express through your music? Is there a light at the end of the tunnel?
For me, a good song is always sad and hopeful at the same time. A sad song is a bit like crying. It relieves. It helps to heal your wounds. Wounds of love, of failure, of disappointment. A good song cures and gives you the strength to close a chapter and get on with your life. The sad moments make life so much more meaningful.

Where do your lyrics refer to? Do you try to send messages through your lyrics?
The main message is: you are not alone. And: it is better to be sad and try to gain strength by accepting that this world is far from perfect. I always wondered how people can party and have a great time, when millions of people are starving, get raped and beaten up, get confronted with racism, sexism, inequality. I guess there are three fractions on this world: the ones that try to cope with reality and make and effort to make it a little bit better, then the one who only care about themselves and try to have a good time (no matter what happens with the ones that were not so lucky being born in a rich country, white, well off parents) and then those who try anything to drown any sadness with alcohol, drugs, looking the other way.

Pink Turns Blue was formed in 1985 in Cologne, Germany. What do you remember from the first days of the band? What keeps you alive today, after so many years? Which are your ambitions for Pink Turns Blue today?
Then and today it happens that I meet someone where I have never been before in my life and that person has either a happy smile of bliss on his face humming or singing along to my songs. For some of them a song or two helped them through a difficult time or became a hymn of his life. These people are happy, because I was able to write and make music. What more can I ask. What drives me: I hope to write a new song that does just that. If I managed to do that: write a song that didn’t exist and give it to the world and it makes just one person happy for three minutes.

What do you think about the internet? At the end of the day, does it help the artists or not?
I think it helps artists a lot. Media and distribution are very much in the hand of the majors catering mass entertainment. If you are looking for something fresh, weird, authentic: you can find that on the internet.

How did the COVID-19 pandemic affect you as a band and as individuals?
It made things much more complicated especially for live promoters. Many have disappeared. Less clubs, less shows, smaller audiences. Let’s hope we all will recover at some point.

In December we do a UK tour and in February we do Mexico and South America. In April we will do East Europe where possible. The war in Ukraine made it impossible to do Ukraine and Russia, which is bad. We might do a few more shows here and there in Europe, let’s see who is still daring to do shows in this times.

Send your message to the listeners of your music.
Hey everyone: thank you so much for listening to our stuff and we hope to see you very soon at one of our shows in your area. Just keep going. Thank you for your support.