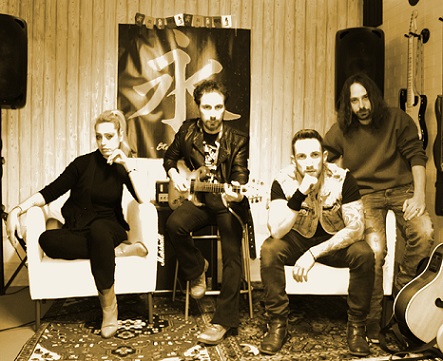 Kajoshin is a name that every progressive music lover should note down. Kajoshin come from Italy and, led by Claudio Russo (guitars, vocals), are here to stay. Their progressive hard rock music has a charm that will conquer you. “Chrisalys” is the band’s second album and Myth of Rock grabbed the chance and talked with Claudio. Below you can read all the interesting things that were discussed! Go!

Hello Claudio! Who were the founders of Kajoshin? When and how was the band formed?

It was 2008, when I left my previous one (an Italian rock project) and I decided to take a different path. I wanted to create a band that represented me, that was the fruit of my passion for progressive rock. In Italy it is not easy to propose independent music and what I had in mind was mainly instrumental music. With a little difficulty, I managed to create the first Kajoshin nucleus in a year.

Which is the current line-up of the band? Present to us the members of the band!

The band is formed by me precisely on guitar and vocals (as well as the authoral part), Alberto Pigazzi on drums (a character who comes from the environment of independent reggae music, but with a past also in metal bands), Eros Pipinato on bass (a friend I have known since childhood, a great musician with a funky and rock background). In the last album, Elena Pavanello participated, a very good singer and also with skills in the managerial field.

Kajoshin is an old childhood nickname of mine, it has no meanings in itself (and it doesn't even have to do with the Dragonball manga that was fashionable a few years ago here in Italy), but simply an imaginative distortion of my name. I chose "Chrisalys" for our latest album, because I felt the need for change within me, not just in music. The chrysalis has within it both the old (caterpillar) and the new (the butterfly) and I think it perfectly replicates the music on the album.

“Chrisalys” is the second album of Kajoshin. Where would you trace the differences between “Chrisalys” and your debut, “Armi Di Seduzione Di Massa"?

I think there is more maturity in the writing of the last record. The old one was the result of the combination of several musicians, where everyone put his own. In this work I wrote all by myself, assisted in the production phase by Alberto Pigazzi who in addition to being a good drummer is also an excellent studio technician and arranger. Oh, I forgot: the old record was sung in Italian. 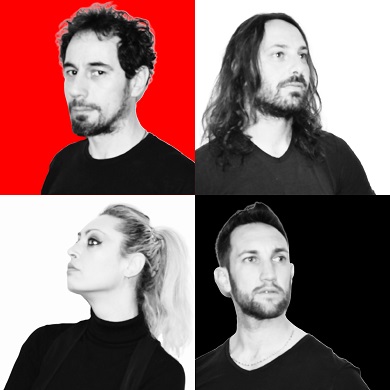 Kajoshin dissolved in 2013. What helped you to return and release a new album?

We disbanded due to musical differences and also due to different life choices. In 2015 I recorded a solo album entitled "Eternal Sunshine". I needed to rediscover that group dimension so dear to me and I didn't want to throw away the work done previously. So I decided to try again.

When were the songs of “Chrisalys” composed? Who is the main composer of the band? How is a Kajoshin song composed?

The main composer of the band is me and on this particular album I did almost everything by myself, while in the 2012 album the songs were written mostly together with the other members. The track "Chrisalys" was written a few years ago, using David Gilmour-like delays in "Run Like Hell". The atmosphere of the piece is very different from that of Pink Floyd and it seemed appropriate to me when writing the album to include it as a title track.

How would you describe Kajoshin’s music to someone, who has never listened to the band?

I would say that it is a classic rock formation, where a lot of space is left for instrumental parts, atmospheres, with references to vintage progressive, but with more modern and compact sounds. The songs are sometimes very different from each other and deliberately to create emotional friction and unexpectedness.

Which are your main music influences? Name your favorite artists/bands!

Surely I love progressive rock and my favorite band, since I was a child, is King Crimson. I listen to and love all classic rock, the 60's, the 70's ... and many more modern bands too. If I hear someone doing unusual stuff, I'm interested.

How important is improvisation for Kajoshin?

Very, very much. A lot of ideas were born like this, even if on the last record I did a lot by myself, manipulating more the music in pre-production. In concert the pieces are defined, but there is always room to put your own, to make the show always alive.

How did the COVID-19 pandemic affect you as a band and as individuals?

In this regard, you could write a book ... joking aside, there is very little to laugh about, the pandemic was one of the causes of "Chrisalys". Being at home for so many days made me think and the desire to get back on track with new music rose spontaneously. I think especially for us in the band, the hard time we have lived has brought us together more than before.

Do you play live in concert? How do Kajoshin sound live? Do you have any tour plans?

Live we try to create an organic show. Some pieces are performed as per record, others, those that lend themselves better, are lengthened or modified to make them more palatable. I think it's important to create a certain expectation, a certain suspense in the audience, and then please them. Sometimes we even put in some covers of artists we love. We do not currently have a tour program, but we are planning for 2023.

Which feelings of yours do you try to express through your music?

Making music for me and above all the instrument I play, the guitar, has always been a place where I can feel myself, where fear disappears, where I can fly. Especially in the last two years, music is taking on more and more a spiritual value.

First we would like this collaboration with WormHoleDeath to go well and continue. We would love to play abroad and it will be on this path that we will work.

Claudio, send your message to the listeners!

Dear listeners, if you want to enjoy our music, sit back, close your eyes and let yourself go. Maybe don't stop for the first time, some pieces need to be decanted like a good wine. Be curious. If you like our music, please support us.

Thank you very much for this interview!

Dimitris, thank you very much for this chance. Best wishes.