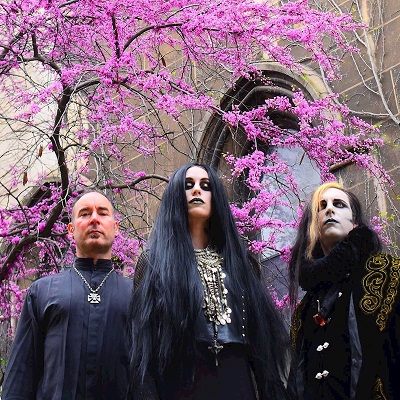 Having released two nice albums, the debut “Lore” and the sophomore “Inferno”, Dispel gaze at the horizon with optimism and ambition. Their fine electro gothic rock style has earned them fans and fame – Myth of Rock recognized potential in Dispel and contacted the band for an interesting talk. Scott Dispel (drums, keyboards) was here to give us every answer to our questions!

Give us a short biography of Dispel. Which is the current line-up of the band?

Dispel (Dih – spel), hailing from the Rock Hall of Fame city, Cleveland. It’s been said we put the Go in Gothic Rock. We’re inspired by historic lore, mystical sagas, medieval literature and late night sessions of Dungeons & Dragons. Our goal is to create Fantasy driven music, through the hauntingly beautiful voice of Berklee School of Music’s Ravensea, to contrast the heaviness of the booming bass lines, grinding synths and guitars. Our current line-up is Ravensea (vocals), Scott Dispel (drums and keyboards) and Sean Gallows (vocals and bass).

How do you feel now that you release your new album?

Quite honestly a little bit relieved and a little bit burned out. It took two and a half years to write and record. Putting a literary masterpiece like “Dante’s Inferno” to music, was a huge undertaking, we had to make sure we did it justice. So lots of attention to detail. We’re an independent band, so we did everything in house; as far as advertising, artwork and imagery, the music videos and social media.

Where would you trace the differences between “Inferno” and your debut (“Lore”)?

Great question, I think our song writing has grown, we felt like we’ve matured a little with our sound, it represents our early influences of 70’s rock conceptual albums, with a modern darkwave grind. It was also nice to have a better feel of where we were as musicians, so we could push the envelope and try to operate outside of our comfort zones.

Who are the main composers in Dispel? How would you describe the music style of Dispel? Which are your music influences?

I write the majority of the music and then collaborate with Ravensea and Sean, when we iron out the verse and chorus sections of the songs. Lyrically we all contribute. Personally my music influences really draw upon 70’s progressive rock, 80’s new wave and 90’s goth rock. However, I really try to keep that punk rock attitude as a backbone for our songs. I really miss the attitude and rejection of authority, early bands used to have. Bands that really pushed the music envelope by creating something original, that’s what really draws my interest. Bands like Black Sabbath, Misfits and The Sisters of Mercy, all have this dark element to their music. Counter culture, offering something for the rest of us. We’ve been described as goth electro rock, but gothic fantasy rock is what I tell people, when they ask about our sound.

Who is the one who writes the lyrics? Where do your lyrics refer to? How much important are the lyrics for Dispel?

These first two albums we wanted to contribute something meaningful to the listener, so yes lyrics are very very important to us. We’re story tellers, I love, when something inspires my imagination, makes me think in an introspective way. Bands like Rush and Iron Maiden did that for me, when I was growing up, so I want to share that experience with our fans. Our first about “Lore” was about the various stages of the Hero’s Journey. We all go through that journey at some time in our life; it’s a tough road ahead, but challenges promote growth. “The sleeper must awaken” or you’ll become stagnant or worse. On this new album, “Inferno”, we dove deep into “Dante’s Inferno”, it was a perfect fit for the band and a huge challenge. We love how Dante revealed such a fundamental Truth, your responsible for your actions; there are consequences.

Give us all the necessary information about the production of the album (recordings, mixing, mastering).

We wrote, recorded and produced the album here in Cleveland, in my humble little studio. It was mastered by Martin Bowes of Attrition fame, in the UK at Cage Studios. I love working with producers, but we didn’t have the budget this time around. The majority of the album was written during the lockdowns, so it was a fitting subject for a fitting time in history. 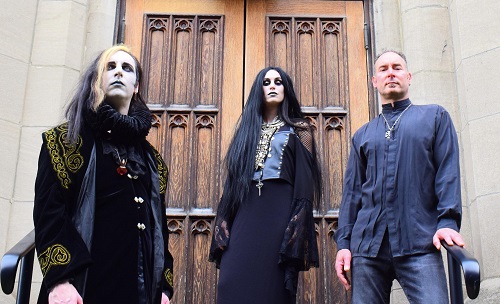 How and why did you name the band Dispel?

Another good question, so I’m a gaming nerd and there’s a spell called Dispel Magic, which dissipates any magic in the area, so one day I came up with Dispel music and felt that really nailed how I felt about the local underground music scene, so decided to go with Dispel.

If you had the chance to cooperate with a famous musician in a Dispel song, who would he or she be? Why?

That’s a really tough question. Trent Reznor comes to mind, he’s incredibly successful doing his own style which I respect tremendously. Would have loved to work with Dio, besides this amazing voice, he had the fantasy element of music well established. I think Τhe Sword from Austin Texas, has such amazing guitar riffs, would love to create a wall of sound with them. But ultimately Black Sabbath took music in a direction, which had kept so many people sane it can’t be overlooked, so they are my ultimate.

How easy (or difficult) are things today for a gothic rock band? Which are your ambitions?

We music has certainly changed since the 90’s, there’s a definite lack of middle ground for bands. However, the internet is a great equalizer. But you can also get censored overnight, if you go against the narrative so, lots of challenges for bands to walk a fine line, if they so choose. Our situation is kinda unique, as our singer is currently a World traveler with her charity work, so I’m looking to create a theatrical performance for this album, a rock opera; because one off shows are just not feasible for us. We need to do something we can sustain for a period of time. Big ambitions I suppose.

Do you play live? How does Dispel sound on stage?

We’re about to start rehearsals, as we’re launching this new album, we are adding a guitarist to the line-up, up until now we have used studio musicians on guitar, so we’re really looking forward to adding some extra edge. Ravensea, Sean and myself are performers, it’s what we look forward to, how we enjoy interacting with people and it’ s how we best express ourselves; our goal is to inspire others and it’s clear music is the best way for us to do that.

In your opinion, which feelings do your music and lyrics arouse to the listener?

Growing up, music was such a refuge for me and I think most people can relate to that. I feel obligated to give that back, through conceptual albums, that inspire, inquire and are introspective. Our imagery, art and music videos lay it out, we’re really that into fantasy and want to contribute to that genre, we love it so much. Just add music and it’s go time…

How much and in what way did the COVID-19 pandemic affect you as a band and as individuals?

It was honestly crushing for us, we had just released our first album at the end of January 2020 , then the World went on lock down, we had to cancel a tour of Germany and haven’t been able to pick up those pieces. I used the time to write the majority of the ‘Inferno’ album, so it did not go to waste, but the opportunity to properly promote our first album was sorely missed. It also hurt Ravensea and I as it shut us down in our jobs, I Dj professionally and lost so much work. It was a devastating thing for the whole planet, especially to musicians and service industry workers. Locally so many restaurants never recovered and closed.

Which are your future plans? A tour?

Future plans is to start working with a playwright and do something completely different with this album. We are looking for an ambitious playwright with a vision, so hit me up. Rehearsals for the live set begin as soon as I get caught up on album orders. We funded this album through a crowd fund on Kickstarter so lots of packages to ship out and cool bonus band swag for those who believed in us.

Well it’s a message to you my friend Dimitris, it’s with your support and interest in independent bands like us, that make our message and story reach people. Never have reporters and the independent media been so important. So good work, it’s you who keeps the music alive…