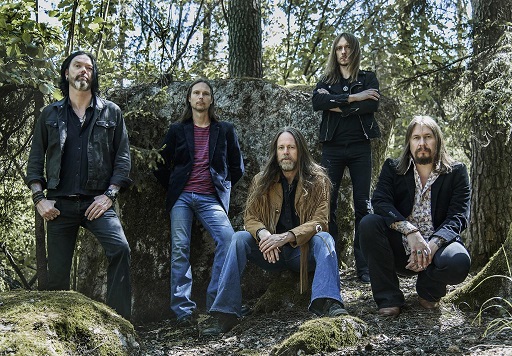 Days have been really warm in Sweden this August, on an unusual way. Someone could say ‘hot’, as the temperatures can be around 29-30 degrees Celsius. Swedes are not used to this extreme heat wave which has appeared due to the global warming crisis. However, there is a lot going on, hard rock music – wise. It is also a very busy period, especially for Lugnet, where the band is warming up and gearing up for the release of their new album, upcoming gigs in Stockholm and other cities and we could definitely say that “the heat is on”! We met Fredrik Jansson-Punkka(drums) in Gamla Stan, Stockholm, where we had the opportunity to catch up, remember old (or not so old?) days and speak about ‘Tales from the Great Beyond’, this exciting album, soon to be released in a record store near you.

Hej Fredrik, nice to see you again, I appreciate the time you too to be with me on this interview. How are things for you?

Hej, I am doing well, thank you! Hope the same for you, good to see you again.

I assume that things are quite busy and exciting on Lugnet camp nowadays. The new album is out soon, gigs have been scheduled, give us a bit of info about the current situation of the band, towards the upcoming days/weeks.

Right now we are just rehearsing, we will have a release party on August 28 for the new album, here in Stockholm, and after that we will try to play as much as possible on these hectic times and be out touring, as much as we can really. And depending on how much busy we will be touring, we will start writing the next album. We have a lot of material just there waiting, so we will do as such.

Speaking about the new album, we would like to know more details about the writing process. How did it work with writing the songs, the riffs, the lyrics, and the ideas overall?

On this album, we had more time to spend writing it. For the first 2 records, we wrote 8 songs and that was it, more of less. This time, we started writing actually just before the pandemic started, and when we realized we re not gonna get anywhere, we rehearsed a lot. US in the rehearsal space, both of our guitar players they brought so much material and so many ideas, contributing massively on this record, which worked out brilliant I must say. They basically wrote 90-95% of the album, the bass player wrote one track and I wrote 2, and the rest is from Micke and Matte. And you know, as I said, we already have a bunch of material just waiting, so we spent one year focusing more on the songs than we usually do. Hopefully you can hear it when you listen to the album, I mean, there is so much effort there, work, I think you can tell that it took a lot of time for us to do it. For instance, the single we released ‘Pale Design’, that was the very last song we wrote and recorded. And we wanted something different, more uptempo, more diverse.
We wanted to make an album exciting for us to hear it ourselves, but also it should be more diverse for everyone as well, with more layers and ideas, different moods, ‘shades and lighting’ as well sort of.

To my humble opinion, this is a brilliant record. It has all the Lugnet DNA, the band’s character, but it delivers a fresh point of view, a modern approach on all aspects: vocals, riff ideas, the production, and most of all: the actual song writing, which is progressive, for what we have heard so far from Lugnet. What is Lugnet trying to achieve on this album?

One of the goals is trying to develop, to try new things, this is very important for everyone in the band. If we did the same album for the second time in a row, that would be devastating for us, it would not make sense for us. It is not how it works. Since we have different members on the band for example, Micke has brought so much energy to the group, fresh ideas, we have also Matte in the band who is one of those guys, a musical genius who can play pretty much everything. So, to have someone like this in the band, saying ‘We need this specific instrument for this track’ and he goes ‘Oh sure, I can fix that, no problem’, this is very convenient and it has worked great so far. It makes everyone’s life easier. Now it is a solid lineup, where people want to commit their time and dedicate all their efforts in the band, and they really wanna play altogether. This is very important to get what is needed for a band, make things working and go somewhere.

Everyone’s working for the same goal. Its fun to rehearse! Its fun to rehearse with these guys! We put a lot of time and effort on this, so, you must be committed on this and it has to work. It is not a full time job but it’s almost like this!

I am not blaming anyone of course or pointing fingers, but before, we did not kick anyone out from the band. All previous 3 members left themselves, for their own reasons, but they were not as committed as needed, they did not think hat was fun, which I respect of course, and I don’t have any hard feelings, I met them after some time and it was nice to meet them actually. But being in a band is something different. You have to be able to work as a group as well. Some people actually are difficult to work with them, and I am definitely one of them for sure! I can tell you that, this is not news!

One of my favorite moments of the album is the instrumental ‘Svarv’, a very beautiful, mellow, and nostalgic folk instrumental song. What was the idea behind it and who actually wrote it? This is an excellent example of balancing the right way: acoustic guitar, accordion, bass, flute, and some percussion. Simply brilliant! Did you have guest musicians on this or not? I am really interested to know more about ‘Svarv’ – which I also found out that in Swedish, it means ‘torn machine’. So, tell me more about this song overall.

Matte wrote it. And he wrote it while playing everything on it, a one man show thing! HE is absolutely brilliant. I think it started like this: we have a common Dropbox, where we put all our ideas, our riffs and  everything, like a pool, where someone can send something and the rest listen to it and decide. Matte wrote that part and sent it there and we said ‘Ok, that sounds nice, let’s put it in the record’. So, this and the last song of the album as well ‘Tåsjö Kyrkmarsch’ he wrote them also. Those 2 took their place in the album immediately. And also, we consider the album from the vinyl perspective as well: the record should not be long, it should be approx.. 45 mins, tops, and the track listing should be good as well. This piece ‘Svarv’ it was fantastic to have it in the middle of everything, finishing Side A of the vinyl, letting the listener to catch their breath sort of, and then change to Side B and continue. Like you clean your pallet, before you go to the next course. Its just nice to breathe for a while and then move on. About the name, I guess you need to ask him next time you meet him! I didn’t think about the title honestly, but loved that song. Actually, I had a couple of suggestions in Latin at first, but then he took the name Svarv and I am happy as it is.

I believe that the whole band has excelled on this record: You with your solid and characteristic drumming, Johan has done a fantastic job in vocals, so focused and driven. Lennart, Matti and Micke doing what the know best, they all shine on this album. How is it to work with these guys, on and off the stage, the rehearsal room, etc.?

Just working with them is so fun and I really like it.

They are very easy going, fantastic musicians and everything is so easy while being and working with them.

We do not argue at all about anything. And the musicality with these guys is just amazing. You can ask pretty much about anything and they will definitely deliver it, it is great! Imagine the biggest box of colors, we can do pretty much everything! You name it. And Matte, for example, he was in a band called ‘Wizard’ in the 80s and he is also involved in his solo stuff, also played with a band called ‘Badge’ (together with Lennart).

Is that Lennart that you know the most time, right, and started the band? How did it start?

Yes, It’s just me and him from the start. I met him at Sweden Rock Festival in 2009, where I was playing with my older bands and we were having a beer after the gig in the bar, he came to us and we started talking.
He said to me ‘we should jam one day’, and I Said ‘Ok, sure thing’. I didn’t think about it a lot at that time, I mean, I knew who he was and that he was a great player, but, I had no idea where all this would end up with me. And then he called me 3 years later, suggesting to put up a band together. And we got together and that’s how it started..

What are the plans for promoting the record or touring? Any shows abroad?

Nothing scheduled abroad. But we’re playing on a ferry! We might be in Finland, but I don’t know the time, and we will be in this case on international waters!

Have you planned any gigs with Wooden Fields? The album was simply fantastic and I can’t wait to see you guys playing the album live!

Yeah, we play in November in Stockholm, in an old brewery close to Globen, so its going to be really cool.

Last but not least, what’s your message to your fans?

Is there anyone out there?! (laughs)

If you have listened to our records, bought the albums, downloaded the music etc. I wanna say a big ‘thank you’, it really means so much to me and us. We will try to play as much as possible in the near future and meet as many people as possible! See you out there!

Always a pleasure to meet you in person and talk with you, thanks for your time, see you quite soon again, actually next week in Akkurat!

Absolutely, always a pleasure to meet you and speak with you. See you in a few days! 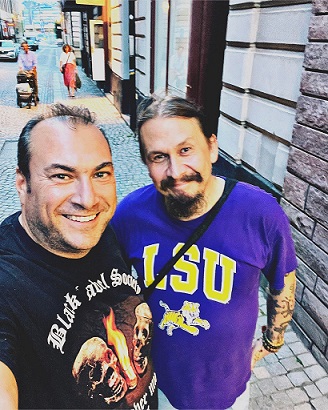