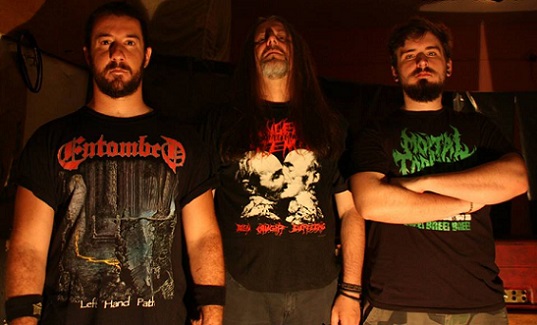 Myth of Rock is looking forward to attending the historic Breaking The Curse Festival at Temple Athens, in the 15th of May, 2022. Four Greek bands of the extreme metal scene, Acid Death, Piranha, Death Courier and Selefice, are going to perform live on stage. On behalf of the death metallers Death Courier, Billy Soulas talked with Dimitris Zacharopoulos and their chat was more than interesting! Keep on reading and don't forget - the local scene needs our support!

How do you feel that you are going to play live in the Breaking The Curse Festival?

This is definitely a return to our past as all the bands in this festival are coming way back from the beginning of the Greek metal scene …This is a reunion of a brotherhood!!!

Which are Death Courier’s music influences? Which are your music heroes?

Our main influences back in the beginning and always are Sodom, Possessed, early Kreator and Destruction, Razor and Morbid Angel.  My heroes are Tom Angelripper, Martin Ain from Celtic Frost,   David Vincent from Morbid Angel and Jeff Becerra from the almighty Possessed!!!!

I have always wondered why you chose the band name Death Courier! How did you pick that name?

We took our name from the demo tape ‘’The Courier” of the Danish band Samhain from the year 1985,  ….” primitive death metal first thought was evil courier and finally death courier”.

Who is responsible for the songwriting in Death Courier? What does inspire you to compose music and write lyrics?

I and George are making all music for Death Courier ….   Lyrics and music are coming from our personal nightmares and our way of understanding the twisted reality we all live in ….

Can you present to our readers your current line-up and Death Courier’s discography (full-length albums) until now?

Death courier is a three-piece band: Ilias Iliopoulos on the drums, George Petousis on the guitar and Billy Soulas on the bass and vocals. Our full length releases are “Demise” (1992), “Perimortem” (2013) and “Necrotic Verses” (2020).

Death Courier is one of the first big bands of the Greek extreme metal scene. How different were things back then in the beginning? Which are your feelings now that you are still active?

It was really difficult to create a band as all the things we know today as standards did not exist …no magazines, no internet, no instruments, no rehearsing places, no musicians, no concerts, really nothing….. everything started from nothing and this live festival is a reminder than these bands are first of all friends and the pillars of the Greek metal scene. Our only aim after all these years is to be part of this metal scene and play live.

Your latest album was “Necrotic Verses”. Are you satisfied with the album now, two years after its release?

The response worldwide was very satisfying, but since everything is blocked by the pandemic, we could not support the release as we planned ….. We are still waiting things to be back to normal again….

Greek extreme metal scene is famous all over the world. Why do you think this happens?

Hard work from many talented musicians and fresh ideas to mention some reasons of the worldwide respect and success of the Greek metal bands ….

Make more live concerts and release more extreme music as we are working on that every day...

We would like to thank Myth of Rock Greece Webzine and you Dimitri for the support and to all friends out there join the couriers, support the Greek metal bands and music and stay united and core...