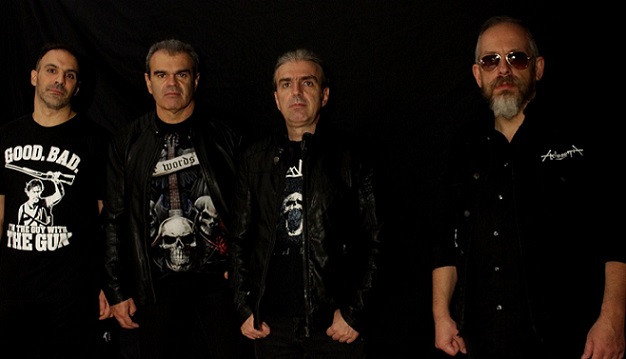 The 15th of May 2022, is going to be a historical date, since then the Breaking the Curse Festival is finally going to take place! Selefice, Piranha, Death Courier and Acid Earth will perform in Temple Athens and Myth of Rock is looking forward to this significant event. So, we talked with Piranha and John (guitars, vocals) about this upcoming festival, and other intriguing topics! Right below you can read what was exactly said!

How do you feel that you are going to play live in the Breaking The Curse Festival?

Hello Dimitris, we are counting down the days until the concert with great impatience because we have not done any gigs for two and a half years due to the pandemic, but also we are very happy that we will share the stage with our brothers in metal from the 90s. I believe that all the bands are looking forward to the time to go up to the Τemple stage. May 15th will be a historic night that everyone must experience!!!!!

How would you describe Piranha to a young listener, who doesn’t know the band and your music?

Well, we formed in 1987. We are one of the oldest metal bands in Greece and we play death/thrash metal. Our style is fast drums with heavy offensive riffs and hellish vocals and also some dark atmospheric and melodic brakes. We have released two demos and three records (LP and EP). We play together with many Greek bands such as Septic Flesh, Acid Death, Nightfall, Flames, Death Courier and also with major international names such as Destruction and Malevolent Creation.

Two years ago you released the “Arise from the Shadows” album. What do you think of that album now? Would you change something if you had the opportunity?

Our CD “Arise from the Shadows”, as we have mentioned several times, is our THANK YOU to everyone who supported us and continues to support us all these years, so we believe that it is our best release so far and we would not change anything.

Piranha was formed in 1987. What do you remember form the first days back in the late 80s/early 90s?

Having a metal band in the ‘90s was very different from today, because then there were few studios to rehearse with the band, there were also very few places and clubs to do concerts and of course, there was only one Greek record company that dealt with metal sound. Even the recordings were different then (the recordings were only analog, which you do not have the ability to copy/paste/erase that you have today in digital productions), so you spent many days in the studio. And the technology has changed, for example, in order to record guitars and bass then, you wanted heads and cabinets (amplifiers) that took up volume and space, therefore large studios, while now with amp modelers and multi effects everyone can write at home in his comfort. Also, promoting your music at that time was very difficult, because the band had to run from door to door and leave cassettes with its material, so that a radio producer or fanzine could hear it. Despite all these difficulties, we managed to release our first two albums “World’s Grave” and “Cancer” that made us well known in the Greek metal scene.

How different are things now in the Greek metal scene, compared with the early days? How much important is internet for the bands nowadays?

The Greek metal scene of the ‘90s was very limited, there were some bands that recorded records and gave concerts in small clubs to promote their music. But little by little, with the perseverance and hard work of Greek bands all these years, they managed to have a Greek metal scene today that competes on an equal footing with any other metal scene in the world. It is natural that the Greek scene with the passage of all these years has matured and has found its sound and also managed to have awesome bands in all metal styles. The internet changed everything in music and therefore changed the bands. The internet made it possible for musicians to communicate directly with the world just by pressing a few buttons on the computer/mobile phone. As a result, bands can advertise and promote their music worldwide much more easily and economically.

Which would be your advice to the young bands, who have just now started their career?

Our advice for new bands who want to enter the very demanding world of music is that they have to work hard on their songs and pay a lot of attention to their sound, because the competition is very high.

Your latest album was released by 7hard Records. How did it feel, co-operating with a German record label? Are you still in 7hard Records roster?

7hard was the first record company to respond, when we sent the promo of our new material and because we knew it from our friends Acid Death (which is the first Greek band they signed with) we decided to sign a five-year contract with them. The collaboration with them is about the same as with any other European record company, direct and aimed at promoting our CD (more abroad than in Greece). So far in the first two years we are on their roster there was difficulty in promoting our release due to the pandemic, but now that things are going better we hope to be able to have a good distribution in Greece. And to answer your question we are still in 7hard Records roster.

When should we expect the new Piranha full-length album? Have you already written new songs? Which are your new album plans?

It is early to say that we are preparing songs for our next release, because we have given all our attention to the promotion of "Arise from the Shadows", but to tell you the truth I have recorded some new riffs and I put them aside, so that we can use them when the time of our new creation has come.

Which was your worst and your best moment in Piranha’s history/career?

The worst moment of my career was in 1992, when I had to stop our concert at AN club due to an injury to my hand that I had suffered at the time and I did not pay attention to it. One of the best moments of my career was the concert we did at the SEF stadium that we played in front of more than 7.000 metalheads.

We would like to thank you Dimitri and Myth of Rock for giving us the opportunity to talk about our upcoming live. And we would also like to tell your readers/fans to take care of themselves during these difficult times and to stay healthy, so that we can all meet on May 15 at the Temple for total metal chaos!!!!!!!!! Stay safe, stay metal.