On the 15th of May, 2022, Breaking The Curse Festival is taking place at the venue of Temple Athens, in Athens, Greece. Four historical groups of the Greek extreme sound are going to give a live show, after two difficult years due to the global pandemic and the several restrictions. Acid Death, Death Courier, Piranha and Selefice will hit the stage and Myth of Rock contacted Petros Michopoulos (guitars) of Selefice to talk about this upcoming festival and many other differents topics concerning Selefice! Thank you Petros!

Which are your feelings now that you are going to participate in the Breaking The Curse Festival?
We feel great now that we are returning to live concerts after two years, we feel great, because we will share the stage with real friends, who are members of these historical bands.

How would you describe your music to someone who has never listened to Selefice?
This question has always been difficult for us. We are a band, which combines in its own, special way elements from the whole spectrum of the extreme metal sound with influences from the wider rock sound. If we shall put a certain label, I think the dark/extreme metal label would be perfect for us.

Which are your musical influences? How do you utilize them to compose the songs of Selefice?

Our metal music influences start from the traditional band (Iron Maiden, old Scorpions, Black Sabbath etc.), they absolutely pass through Candlemass and the wider doom sound and reach the classic extreme forces of the decade of the 80s and the 90s (Metallica, Slayer, Kreator, Sepultura, Paradise Lost, and others). However, we always had influences from the prog rock scene (Pink Floyd, Camel), even from New Wave and post punk. There isn’t a certain way we use our influcences, they just lie within us and pass effortlessly to our music.

Which is the current status of Selefice? Which was your last studio album?
Now that we are talking, we have gone back to the rehearsals after a long time, and we also have a new member on the bass, Kostas Latifis. It is a good opportunity now to thank our previous bassist, Manos Michailidis, for all the great things he offered to the band since 2017 and our reunion. Our latest studio installment was the “I Met a God” EP, which was released in May 2019, we are very pleased with the feedback it got from the fans.

Despite the passing of time, you are still alive and active. What does give you the strength to continue?

Our love for music, which is also our psychotherapy from all this unbearable pressure that we all experience every day, but also the friends of this band, who never forgot us, even if they had to wait 24 whole years to see us again.

What pieces of advice would you give to a new metal group, which was just formed?

To work hard, to have patience and not to hurry, to be persistent, not to be disappointed with the first problem, to be ready for a lot of obstacles and evils, to be careful with whom they co-perate, not to pay any attention to the negatives but also to the positive comments and above all, to have faith in what they do. We did not do many of the aforementioned things, when we were young and the result was that we split then ingloriously. If you want to build a good career in this era, you have to have everything I mentioned above.

What do you remember from the first years of Selefice? How were things then for heavy metal in Greece? How different are things today?

Things were completely different, I would say almost primitive compared to today. It was a time without even mobile phones, you almost couldn’t find any rehearsal studios and concert venues, radio and TV stations had set an embargo on metal, the instruments were very expensive, everything was difficult. But our passion for what we did and our persistence in putting up with a system that saw the metalheads almost as alien drug addicts and hooligans kept us alive. This effort then, however, brought the fruits that could be found later on the Greek scene. Today on the technical level, things are much easier, on the other hand the chaos of the internet and the endless information has made it very difficult for a new band to stand out, even when this new band comes out with a worthwhile job. I would say that both then and today things are difficult, but for different reasons. The point is to love what you are doing.

Greek extreme metal. What makes it so special and so popular?
Extreme metal is perhaps the only international music genre that we meet its own school in Greece! And this is not only true for the black metal sound but also for death metal, doom metal etc. I think that this combination of Mediterranean emotion that represents us all, and is expressed with a melody integrated in the extreme sound, makes the difference. Also to this specialty has contributed the fact that for years both the big and the lesser known bands, do not hesitate to include elements of the Greek tradition in their sound as well as Greek lyrics. This gives a very special character that is appreciated worldwide.

What new is Selefice preparing for the future?
This season we are struggling to restart after all that happened with the pandemic, having, as I mentioned above, a new member on the bass. The goal now is to find rhythm again with constant rehearsals, and the big goal is the release of a new full length album. But we cannot speak at this time with a specific timetable.

Petros, send your message to the fans!
Thank you for your tremendous support even when we had been absent for so many years! It gave us great strength and motivation to return dynamically to the stage. And of course, we are waiting for you all at Temple! 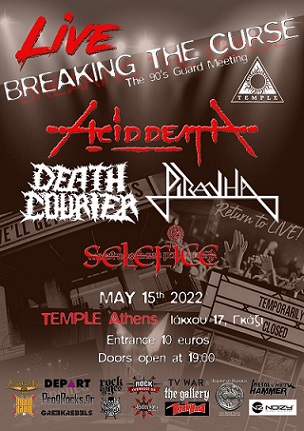