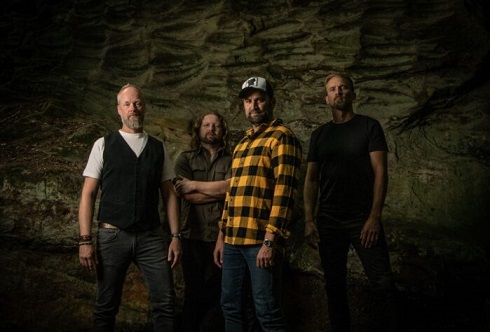 The Defaced are back for good, with their fantastic new album, “Charlatans”! Myth of Rock, impressed by the new music of the Swedish band, tried to communicate with the band, and right below you can read the nice chat that Mattias “Swaney” Svensson (guitars) had with Myth of Rock editor Antonis Mantzavinos. The two of them discussed a lot of interesting things, as you can see by yourselves. Choose “Charlatans”, crank the volume up, push play and enjoy Mattias’ answers!

Hi Mattias, how are you doing? I hope everything is well for you and your family.

Hi Antonis, I am doing well, how is it going for you? I am in my home studio, everything is fine! We are actually going with my family to Crete in the summer, in Rethymno, so, it’s going to be really cool. We have been to Rethymno a couple of times before, and I think it’s a combination between the old town and the Mediterranean landscape, so, not only the tourist stuff, but we also want to explore what the locals like to do.

Really great to hear that you are going to Greece, how nice!
So, let’s focus on the band and the new album now: I really liked the new album ‘Charlatans’, I think it’s a great album, diverse, even within the same song itself, and I believe all of you have done a great job! So, how were things for you and the band during those 2 years of Covid? Did you try to write and record stuff during that period?

The songs were all written before Covid. I think we started recording the album October-November 2019, when Ruben put out the drums. Then of course when the pandemic struck, we recorded on an off basis, and t the beginning of all that, no one knew where this was going and heading. So, we finished the drums first and then the guitars in January 2020, and then we finished the bass, after a break due to Covid. When all this was done, Jen recorded the vocals in Stockholm, in a different studio, with the help in production from Björn Strid from Soilwork. We just let it have its own way, we took the time, but it wasn’t just Covid related. Since we did not have a specific deadline, we took our time, to reflect on the songs, on the riffs, etc. And see where we were heading. I believe it is so important to analyze and reflect on what you are doing, both the songwriting and the actual recordings, and that takes time of course.

Give us some information about the recording and producing the ‘Charlatans’ and also about working together with Björn Strid on the vocals.

Yes sure. Jens and Björn are childhood friends, they grew up together in Helsingborg, 5 kms from where I live now, a bit outside Helsingborg. Björn is a great singer, he is the guy that Jens wanted to produce the vocals of this album with. Also because of the fact that they are friends, it makes everything a lot easier for everyone, I guess. Jens had already all the vocal lines complete and Björn worked in a way to make the best out of Jens, to refine some points and get the best possible result. And as a producer, he can add a harmony here, there, or push Jens towards the right direction. So, overall Björn tried to get the best out of Jens in every possible way.

This album encompasses all the Defaced ‘DNA’ elements; however I believe it looks towards the future as well, with a more fresh eye. What is it that the band wanted to achieve with this album and how was that accomplished?

Well, when I started writing the songs, I had this idea of continuing the heritage from the previous works we have done, with the tonalities, the sound of the band and everything. But also, to aim a bit more in certain progressive directions, just to expand. We had those elements before, but I wanted to make them even more evident in the music, to evolve even further, but I did not want to change anything from the core DNA of the band. When I write songs for the Defaced, I don’t aim something in specific, of course the songs fit into the sound, and I know the idea of a song, whether it fits as a ‘defaced’ one or not. It's not that we tried to sound like something else, but everything was part of a natural progress.

What would be the main influences when writing this album?

Oh, I would say Rock history filtered through us! Or through me maybe! You know, all the bands I was listening to when I grew up, like Black Sabbath, Dio, Iron Maiden, all that great classic stuff. For me, when Mastodon put out ‘Crack the Skye’, it was a mind-blowing record for me, and since then Mastodon has been one of my absolute favorite bands. I rank them very highly. Approach-wise, they also take inspiration from all the classic Rock history, but their music is filtered through this ‘classic era’ process by themselves. So, there was not an aim for me/us other than ‘let the music flow, and if it’s good, let it out’. And that’s how I write music as well, of course taking a guitar and start with riffs, or the melody line at my home studio.

I believe that Jens has done a fantastic job in the vocals (with the help from Björn’s touch also). How was it to work again with Jens, who had been inactive for almost 10 years?

It was great and is great of course! Our collaboration now is more solid and better than before, we had a lot of discussions what we wanted to do, and one thing that he said was that ‘if we are going to do this again, I need to have total freedom on the vocal lines’, and that I did of course with great pleasure. And I strongly believe that, when you play in a band, you always need to have faith and put trust on your fellow musicians in order altogether to achieve something. That’s why you play with them. And Jens is a very talented guy obviously. And, I am a guitarist, I don’t necessarily need to have ideas about the vocals, but, when I have the song written, I can tell Jens where I would like the song to aim for, and then discuss or ask him ‘do you agree?’. In some cases, I have some ideas about a few twists we can take and these we discuss them together. And I have a good feeling right now about writing new songs with him as well, the feeling is there!

What are the band’s plan from now on? I know we talked about the Defaced playing a gig in Helsingborg beginning of June or July, but are there any other gig plans or festivals coming up?

Yes, so, first, we don’t all live together or in a nearby distance. Klas and me live in Helsingborg, Jens lives in Strängnäs, close to Stockholm, Ruben is within 2 hours' drive from here, and we haven't announced it yet, but we will have a new bass player joining soon! We haven't actually rehearsed, but we know he is a great guy and a great player, so he will perfectly fit the group. So, the city festival in Helsingborg comes in the summer. And we have been in good contact with a booking agency in Germany, called DM Entertainment, and they are going to see if they can book several gigs for us, we have worked in the past with Kayser together. So, it might be single gigs or during weekends in Germany, or even during festivals. Germany is close for us, we can reach Hamburg in ~ 6 hrs., therefore it’s an easy trip.

I will never forget the night when Kayser played live in Athens. That has been one of the highlights for the gigs I have attended. What do you remember from that night in Greece, what are your recollections?

Yes, well, there are actually a lot of things that I can remember from that trip to Athens.. Because it was such a great trip! Very well organized, I mean, I remember everything! From Ruben’s problems with the house drum kit and how fast and effectively that was replaced so that he was able to make the gig on time.. All fixed with a simple phone call and that was it! Amazing! The gig was really great, sweaty as hell! Jokke’s amp was burnt up, but he had a replacement as well, so that worked fantastic! There were a lot of incidents on that trip! (lots of laughs...!) The roundup of the evening, on the roof top overlooking Acropolis, was a magic moment.. Such good moments.. I do carry those moments with me, always.. That’s why I asked for Raki and since I have been in Greece a couple of times ago, I have taken Raki with me in Sweden, such good stuff!

Is there a chance to see Kayser re-uniting and writing new songs?

Let’s say, if Spice would like to do it, I would go for it. Absolutely. I don’t know where he is at. Maybe he is just comfortable doing his stuff and not having another group now or collaborating from that perspective. We definitely did very good stuff together, we had great chemistry. So, it would be great again! I felt like that with him and really enjoyed our time with Kayser. So, I would definitely consider it. And I felt that we were not done, you know, with the fourth record and Jokke leaving the band, I was fine, I said ok, but felt that we were not done at that point. We also discussed this at Demsey’s graduation party that you were also present, me Spice and Ruben, so, let’s see.. Let’s keep fingers crossed that we can do something in the future!

Do you listen to music on your free time? Any new band or new stuff that you like listening to, outside of your own music time you spend?

I actually mainly listen to vinyl, and I am a huge vinyl fan, that’s the main source for my listening time at home, but I also buy new vinyl records from bands like Mastodon, Fates Warning, a band that I really like from years now, ‘Theories of Flight’ is a super album, I love it. I tend to listen a lot on vinyl.

What keeps you busy outside of music? Any favorite hobbies?

I play tennis and since I play tennis, I enjoy playing very much Padel! A couple of weeks ago, I strained my calf, so this was very unfortunate, and it means I need to take it easy now for some time... In a normal week, I play tennis three weeks and Padel one-two times per week. So, I keep myself busy with that.

Thank you for your time today, it was a pleasure and I hope to see you and the band playing live, now I will have more chances, moving closer to the South of Sweden!

If you are around, just give me a call and it would be really cool to meet up for Fika or for dinner, my pleasure! Thank you for the invitation, take care Antonis, great to speak with you! Cheers!