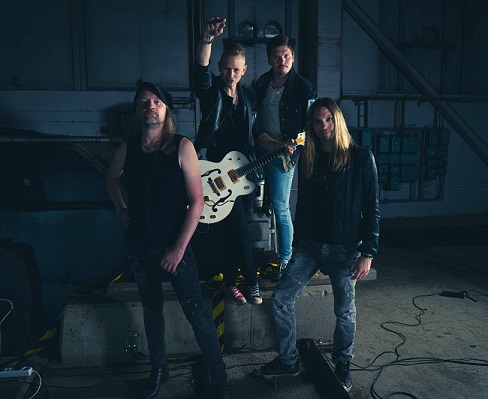 Myth of Rock had the chance to speak with Victor Crusner, the bass player of Eclipse, during his trip to Dalarna in Sweden. We talked about different topics, such as the new album of the band titled ‘Wired’, Victor’s music voyage so far on different aspects, about his band Långfinger, and many other things. I hope you enjoy it like I did!

Hi Victor, I hope you are doing well during these troubled times which hopefully will end soon for all. And thank you very much for your time to have this interview with us.

Thanks for having me, great to be talking to you and we're looking forward to coming back to Greece. I believe our gig in Athens was one of the last ones we had before the pandemic.

The new Eclipse album, ‘Wired’, will soon be released, and we are all excited about it! Please give us a bit of background from the writing process, your contribution and any particular trivia that you would like to share with us, from the studio and the overall writing process.

I had a great time making this record, partially because it was my first time being a part of that creative process with Erik, Magnus and Philip, but also because there really wasn’t anything else we could do at the time. The real tracking of the album probably started in the fall of 2020 and continued until spring this year. We’d all travel up to Dalarna in the middle of Sweden where Erik’s studio is located and throw ideas around and it didn’t take long before we had a big basket full of songs. Whether it was intentional or not, there definitely was a collective push for up-tempo songs and positive nostalgia. We wanted to make an album that would celebrate the stages, the venues, the evenings in rock clubs around the world, festivals and such. A complete contrast to what most people in the world were experiencing at the time.

The first song that was written that actually ended up on the album was probably “Carved In Stone”, I remember sitting in a cab with Erik in Helsinki heading to our gig there in January 2020 and he’d just recorded an acoustic demo that he played for me. Just him and an acoustic guitar and it was absolutely fantastic! It’s pretty much exactly the same as the version you’ll hear on the album. The last song that we did on the last day before wrapping up was “Ain’t No Fun” and it’s definitely one of my favorites because it’s so direct.

You have been for some time with Eclipse now. How did that come up, how did you join the band and how is your overall feeling so far? Apparently there was a connection with your brother, but we would like to find more about you joining the band, two-three years ago.

Right, I have been around the band since my brother joined in 2014, and when they called me to ask if I’d join them for a tour, I said yes directly, obviously. I showed up to the first practice with my good old Rickenbacker in drop-c tuning, which didn’t work at all, so the other guys were really stressed, since the tour was starting in about two days. Re-stringed, re-tuned and off we were. I’ve had a blast since day one, minus the first few hours of re-learning the entire catalogue in a different tuning.

There’s a familiar vibe within the band both literally and figuratively. We meet up, we play, talk about music and hang out and no one’s dead sick of it yet! 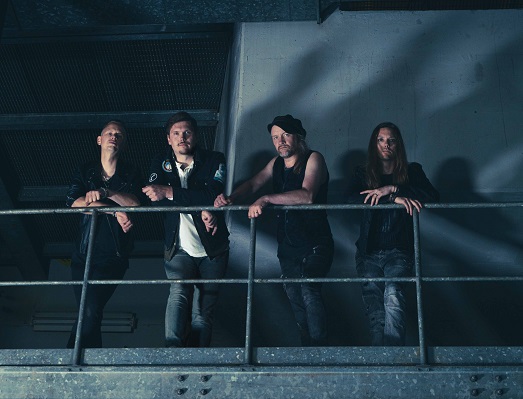 How does it feel to actually work in Eclipse with your brother?

It’s the most natural thing to me. We grew up playing together. We played in a band together for years as kids, so that much hasn’t changed.

The new album has definitely the classic catchy feeling from the whole of Eclipse discography. The band’s DNA is crystally clear on every second of all songs. I believe the band is really very good on playing memorable and beautiful melodies, but at the same time combined with heavy riffs where the result is fantastic. How does the band make it look so easy, catchy and so nicely flowing?

It’s been years in the making, I guess. When it comes to songwriting, not much is left to chance and there’s a collective effort in every song. The question we can ask each other is “do you dig it?”. Ιf “yes”, then that’s good enough, if anyone’s uncertain, we’ll find a way. An Eclipse song is a song that we enjoy ourselves, the rest is really not up to us.

Song number 9 (“We Didn’t Come to Lose”) and song number 10 (“Things We Love”) sound like a statement from the band. What are the lyric themes dealing on this album?

For sure, when I listen to it, the lyrics are mirroring the output of the other instruments. They’re loud and in your face, as much if not more than the music on it’s own.

Do you have any personal favorite tracks on this album and why?

“Roses on Your Grave” was the first song I had a part in writing. It started out a lot slower, but as soon as Erik added the main riff to it, everyone just went: “This has to open the album!”. It was a clear favorite from day one and I’m really looking forward to playing it live. 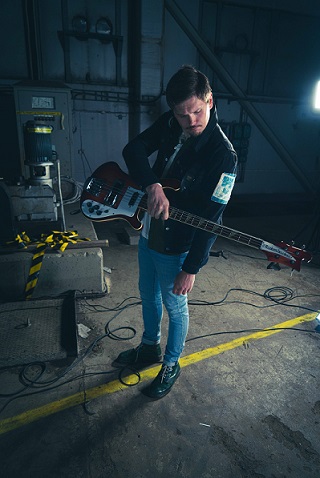 If I am not mistaken, the band comes from Dalarna, and you live in the West Coast. How easy is it for you to manage recording, traveling and also touring? Do you have a full-time job? Or you have the flexibility to be available for such time accommodation?

We all make time for it, as it’s a big part of our lives. We’re lucky to be able to do this, go see places and meet people. Some time ago the band was founded in Stockholm, and besides the recording part, most things we do stem from there still. It’s a big country, but if you’re on the train between Gothenburg and Stockholm and see someone sharing a four seater with two basses, there’s a big chance that’s me!

Now let’s focus a little bit more on you. How did you start playing music as a young boy, which were your first influences and why did you choose to play mainly bass and not some other instrument?

Both me and Philip come from a musical home. Our dad has always played the guitar and mom plays classical piano. We’d always listen to music at home. Bands like Thin Lizzy, Sweet, Kiss etc. Once I started playing guitar and bass, when I was 12, I found my own way through the great book of heavy metal. I went off for a while and listened to some more extreme stuff, and I still do, but mainly there’s a lot of really great classic rock and metal music out there to pay homage to. I didn’t really pick bass as an instrument, I was just not nearly good enough at guitar, ha ha! I did enjoy it right off the bat, however. I’m not the type of bass player that will doodle around and play melodic stuff really, I think the greatest thing is to be able to downstroke a note for as long as it serves the song. It’s, when you play bass in a full band that the instrument really does it’s thing for me. Without it the sound loses all the rumble, and we all know we need more of that.

Långfinger is one of my favorite bands. Are there any plans currently for a new album? Have you recorded something recently? And what about that special show you told me about, when we met last time in Stockholm?

Yes! We’re going into the studio in November to record a new album, the follow-up to 2016’s “Crossyears”. It’s been in the making for about six years or so… The reason being that we got a little bit lost along the way, but have now found our footing again. There’s absolutely something to prove for us now, if we lacked that feeling before. I guess that makes it slated for a 2022 release. That special show must have been the 10-year anniversary of our first record “Skygrounds” that came out in 2010? We had the same venue booked that we played as kids, when that record came out, and we were going to have a special show with guests and stuff. And then came the thing-that-should-not-be-named! Maybe we’ll do it in 2022? A 12-year anniversary? Sounds like a good whiskey to me.

If I am not mistaken, you are also involved in video shooting. Tell us a bit about that, do you have your own company? Is it a full-time job, or? How often do you shoot?

It is something that I do more often than not. We shoot things every week nowadays and I have a company. I have some very talented friends who have all been working with film and video for quite some time now, and I was always lurking around trying to pick up what I could from them. Now that I’m a few years in it’s gotten to the point where we get to make pretty cool things. We did the videos for the first three singles off of “Wired”, and we just finished shooting videos for At The Gates and Unleashed, which was amazing to be able to work with your childhood heroes.

Are you listening currently to something in particular? New or old music? And also, do you prefer listening music at your home, on the stereo, or do you prefer the digital platforms like Spotify?

I’m one of those people who buy LPs and records but rarely play them. My car doesn’t even have a CD player anymore! I have a functioning vinyl player and great speakers, but I still haven’t plugged the cables in yet… Not sure if they need soldering or whatever. I’m pretty sure the other guys in the band would tell you that I’m by far the worst handyman in the band!  Some albums I’ve been going back to right now are Temple of the Dog’s S/T, Ozzy’s “No More Tears”, Bad Religion’s “The Empire Strikes First” and just a bunch of Willie Nelson tracks. 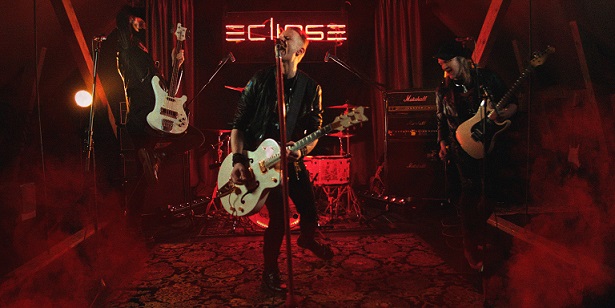 You will soon be on tour. Do you have some personal preference, where you haven’t been before and you would like to play live either with Eclipse or with Långfinger?

Going anywhere sounds great to me right now! I especially enjoy touring in Spain, we’ve always had great experiences there with both bands. Looking forward to going to new places as always.

Any other projects or bands that you are possibly involved and playing or ...?

Looking back I think I played in too many bands at the same time when I was younger. It’s hard to make time for more than three and It’s not fair to your bandmates, if life feels like an unsolved Rubik's cube every time you have to go to practice. I was a part of Wolves In Haze for a while, and they just put out a great record called “Chaos Reigns”.

And now, the final part of this interview – ten questions about your favorite things!

Thank you Victor for your time, much appreciated! And I hope to see you soon from close, either in Stockholm or anywhere else and enjoy a gig together!

Thank you! And let’s do it!