Raphael, you have just released your first album with Icon of Sin. Which are your feelings now about that?

I feel great. That was a fantastic work with my friends, Sergio Mazul (singer of Semblant) and Marcelo Gelbcke (guitarist of Landfall), with a fantastic label that is Frontiers Records. I am very happy, because that’s the style of music I really love.

The album was released approximately three months ago. Are you satisfied with how it goes commercially until now?

I don’t know about the numbers, because that is something, for which I haven’t talked yet with Frontiers Records. However, I keep watching the internet and I think that the album is going great.

I liked the album too! I wonder, Raphael, how would you define the style of the album?

Everyone who likes traditional heavy metal, will love the album. We have music, songs with powerful riffs on the guitar that will remind you of the great bands of the 80s. It is not a copy, of course we have the inspiration from these bands, for instance from Iron Maiden, Judas Priest and Dio. It is all inspired by these bands, I think we created a great work.

Who were the songwriters? And what about the lyrics?

It was Sergio Mazul and Marcelo Gelbcke. The two of them composed the music and Sergio wrote the lyrics. 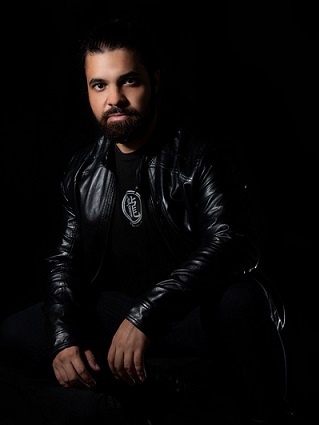 How important was the contribution of Frontiers Records for the set-up of Icon of Sin?

Frontiers Records created the band, they contacted me and sent me an email, telling me that they wanted to create a project for me. Because of this, everything was made from zero. I didn’t have a band, so the band was created by Frontiers. They put me in contact with Sergio and Marcelo, who had decided to work with the songs, and after that I started working with them. And Frontiers Records was very important, because they told us what they want, we just followed the ideas that they had in mind.

So, is Icon of Sin a project or a typical band?

In the beginning it was a project, but then it became a band.

Should we expect a second album by Icon of Sin?

We are already working on the new Icon of Sin album. I don’t know when we are going to release it, but it’s in the works.

You told us that Sergio and Marcelo wrote everything for Icon of Sin. But which is the band’s line-up?

Yes, it is Sol Perez on the guitar, Caio Vidal on the bass, CJ Dubiella on the drums and Mateus Cantaleano on the other guitar. All members come from Curitiba, Brazil, but I am not from Curitiba, I am from another state of Brazil, Espírito Santo.

Which is the relationship between the members of the band?

Before the set-up of Icon of Sin, I didn’t know anybody, even Marcelo and Sergio, I didn’t know them. When I started to work the demos, I met the guys, Marcelo and Sergio, and after I recorded the album, I met the guys from the band, in Curitiba. So, I spent some days over there to shoot the videos for “Night Breed” and “Shadow Dancer”, I spent twenty days in Curitiba. Of course, we got out to drink some beers and talk about the band.

Who was the producer of the album? Who was responsible for the mixing and mastering?

Raphael, let’s go now to some personal questions. When and how did you get into music and singing?

Most people know you as the singer from Brazil who sings like Bruce Dickinson. How do you feel about that?

I feel great, because Bruce Dickinson is my great idol in music. I like it when people compare me with Bruce, you know. That makes me feel happy, because I have always liked the way Bruce sings.

Do you try to sing like Bruce Dickinson or it comes naturally?

OK, I will try to explain to you how I turned my voice this way. I started singing because of Bruce, of course. When I heard him singing, I said, “wow, this guy sings so nice, I have to sing his way”. I just tried and I noticed that I had that kind of voice. The tone was similar, something like that, and I started to improve it. So, I can say that it became natural, I don’t know how to sing another way.

Have you ever taken voice lessons?

No, never, I mean, I just learn by myself.

Before Icon of Sin, people knew you as a famous YouTuber. How did you decide to record this kind of videos and upload them on YouTube?

Yes, it was with my friend Fabio Lima, who is a famous YouTuber in Brazil, with more than one million subscribers in his channel. I just had some amateur videos with my Iron Maiden tribute band and this guy, Fabio, saw a video of my band playing and he sent me a message on Facebook, calling me to do an Iron Maiden song, “Stanger in a Strange Land”. So, it was in 2016, the first time that I posted something on the internet, you know, this kind of videos that people call “collaborations”. After this I created my channel, but I didn’t have a big knowledge of editing videos and recording. I was trying to learn, and after that, I started posting my videos edited by myself. The first video of the “What if Bruce Dickinson was the singer of …” video series was on Fabio Lima’s YouTube channel. I was in his house with some friends and we were playing some tracks, with me singing with the voice of Bruce! It was the first time we made a video like that and many people liked it, so I brought it to my channel.

Apart from Bruce Dickinson, which other singers do you admire?

Which is your favorite Iron Maiden album?

That is difficult, but I always answer “Somewhere In Time”, it is a fantastic album. “Stanger in a Strange Land” is one of my favorite songs.

Which is your music dream, Raphael?

My dream in music? I think it is to go on a tour in Europe and USA with Icon of Sin, that would be fantastic, that is what I would really want to do in the future.

You have cooperated with two famous musicians, on their latest projects – Timo Tolkki and Marius Danielsen. Can you give me some info about these cooperations?

Marius Danielsen’s Legend of Valley Doom project was the first internet project, in which I took part. It was 2016 or 2017, he called me and he asked me to do one song, so I recorded one song, it was “Crystal Mountains” from the second Legend of Valley Doom album. I am also on the “Legend of Valley Doom Part 3” album, I recorded two or three songs. And it was fantastic, because in the first album, for example, there were names like Michael Kiske, Blaze Bayley, Vinnie Appice, so I felt proud to be with these great musicians. I also participated in the new album of Timo Tolkki’s Avalon, which was released some weeks ago. It was fantastic, Frontiers Records called me and asked me to be part of the project. I was very happy, because I have always been listening to the Avalon albums, I think it is a great project. I was surprised when they called, and even more surprised, when they selected “Master of Hell”, where I sing, to be the first single! That was very nice.

Raphael, which is your advice to new singers?

I would say, if you want to do something that you really love, just do it. Do it till you get it. Because it is very difficult in rock music, especially in Brazil, but you have to keep trying. Only that way, you can reach your dreams.

Finally, Raphael, is it an ambition of yours to release a solo album?

Hmm, I don’t know yet, but who knows in the future! I don’t know, the focus now is on Icon of Sin, we want to release the second album and want to create an album better than the first one.