Leaving Tomorrow is a Greek band, which is merging different musical elements (rock, folk, jazz, classical) and comes with an outstanding mixture, so intriguing for every fan of good music. Myth of Rock, excited with the band’s latest album (“Morningdom”), interviewed Alexandros Doutsis (guitar, vocals), who spoke in behalf of the band. Read Alexandros’ answers and you will understand how serious Leaving Tomorrow is.

Give us a short biography of Leaving Tomorrow.

The band was formed in late 2002 and soon after we played our first gig. After a few more gigs and breaks, we rehearsed and recorded our debut, self-titled album, which came out in 2009.  A few gigs later we went through some personnel changes and finally in 2015 the current line-up got together and began rehearsing for the new album, which was recorded two years later.

You released your latest album in December 2020. Which are your feelings for this release?

We’re happy it’s out and hope people will enjoy the music and find something useful in terms of music and life philosophy in it.

Where would you trace the differences between “Morningdom” and your previous albums?

Although the instrumentation and approach is similar, there are elements in the music, which are either new or emphasized. The playing is a little different as well as the overall sound. Also, the first one was a concept album that was more like a story with twelve different chapters, whereas this one has more thematic sections under a general concept.

Why did you name the new album “Morningdom”? Which is the lyrical concept of the new songs?

It’s a symbolic “place”, where enlightenment occurs. The words describe the struggle of overcoming one’s misconceptions and acquiring a healthier philosophy of life.

How is a Leaving Tomorrow song composed?

Traditionally, more or less. You get a good idea or two and expand on them. You then fit the instruments and words to the music and strive for the best.

How would you describe the music of Leaving Tomorrow? Do you agree with the definition “progressive heavy rock”?

Progressive as a way of thinking yes, but not as a style. Sometimes it does get heavy but it’s not heavy by definition. I bet that if you listened to a performance of this music with different instrumentation/orchestration, you might not even classify it as “rock”.

Which are your musical influences? Apart from heavy rock, do you also like folk, jazz and classical music?

Lots of stuff. From folk to classical, jazz, rock, metal, electronic, ambient and everything in between.

You have both songs with lyrics and instrumental songs. Which is more fun for you?

They’re both equally satisfying. The lyrics add an extra dimension to the pieces, because you can read and hear them and, thus, they affect your impression of the music quite dramatically, while the instrumental pieces keep the focus on the instruments and sounds all of the time.

There is a vintage feeling in your songs. Is this on purpose or accidentally?

I’m not sure what vintage means in terms of music, it is ever going. Our music is coming from the past, naturally, but is not purposefully attached to it. There’s not much merit in just repeating what has already been said, many times before, without adding something new to it.

There is also something bittersweet, a joyful sadness in your music. Do you agree with me? Why does this happen?

That would be a feeling best described in Greek as “χαρμολύπη”. However, it is hard to put into words, so we try to communicate it through music. It’s a quite natural feeling and you know it as soon as it’s there.

“Morningdom” was self-released. Why don't you cooperate with a record label?

We tried, but the ones we were in contact with didn’t give us a good deal, so we decided to go on and release it ourselves. Furthermore, record labels are not what they used to be and their importance in the remains of this industry has been greatly diminished. We, finally, believe in DIY processes and healthy music utopias.

Apart from melodies and feelings, your music has a great technique. How difficult is it for you to balance between technique and feelings?

Technique is just the tool, which helps you express what you want to express. If you acquire it just for the sake of it, it limits your intentions and actions. If you use it to get something through, then it is essential.

How has the coronavirus pandemic affected you personally and musically?

It actually influenced, not affected, us (cause we believe that no coronavirus pandemic can regulate our personal emotions; we are responsible for them, at the individual level). So, we had to postpone some of our plans and some of our activities became rather difficult to maintain.  At the same time it is a good opportunity for our societies to reflect and begin to reorganize, mentally first of all, but structurally too.

Are you going to tour in support of the new album? How important are live gigs for Leaving Tomorrow?

We’d love to, but the current situation does not favor long-term planning. We’d like to start playing gigs as soon as it is made possible, because it is very important for us to be able to perform in front of an audience and interact with it. Let’s hope it happens sooner rather than later. 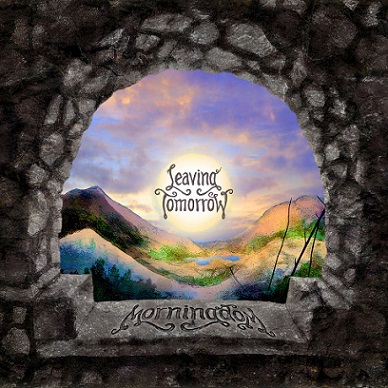