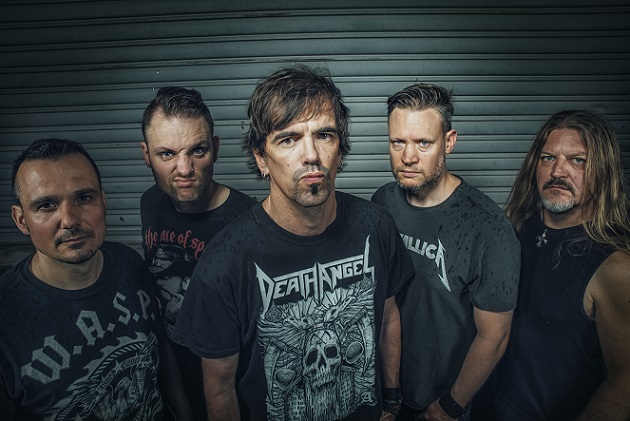 “Poison Thorn”, the debut full-length album of Godsnake, presents to us a new band from Germany, which is here to stay. Godsnake, a company of metal thrashing mads, doesn’t break new ground, however, they are doing perfectly what they know well, with style and conviction. They have great songwriting skills, a perfect musicianship and above all, a lot of inspiration! Thus, Myth of Rock contacted the band for a nice little chat, and Stevo (guitar) and Sidney (drums) answered our questions, on behalf of the band. The snake is already crawling!

Give us a short biography of Godsnake.

Stevo: Some of us have been playing music together since many years. With Godsnake things started shaping up when we recorded our EP ‘Hellbound Ride’. We then went through a few line-up changes and ended up with the current set-up which has been stable since 2017. There was (and is) a great vibe within the band and we then slowly but steadily started working on our debut Album ‘Poison Thorn’. It took a while until it was ready, but we are now very happy with the result.

Which are your feelings now that you release your debut album?

Stevo: It’s a great feeling to have those songs finally released. We have been playing some of those songs already for years, so it’s good to get them out now and share them with the world.

Sidney: It is great to know that people everywhere - like in Greece, Canada or Japan - are able to listen to our songs now. It feels great to get feedback from people in a whole different part of this world letting us know that they like the songs and music.

How would you describe the music style of the band? Which bands have had the biggest influence on you?

Stevo: There are many different elements, but melodic thrash metal probably sums it up best. For me the biggest influence by far has been the Bay Area thrash metal scene starting in the early 80’s. Bands like Metallica, Testament, Slayer or Anthrax, then in the 90’s also Machine Head are my biggest influence.

When and where was the album recorded? Who are the main composers of the band?

Stevo: It was recorded in November 2019 at LSD Studios in Lübeck. I write almost all the music and then Torger does the vocal melodies and lyrics.

Who did the mixing and the mastering of the album?

Stevo: This was done by producer Lasse Lammert in his LSD Studios, Lübeck.

Sidney: Lasse already took care of our EP `Hellbound Ride‘, so we know him for a while already. He is a perfect match for us, able to create the sound we like, especially when it comes to guitar sounds he is a real pro and we know that it will sound great when we let him do the job.

Who is the lyricist of the band? Where do your lyrics refer to?

Stevo: The lyrics are being done by Torger. They mostly deal with social criticism and the worst animal and its activities against its own species………the human creature.

What does inspire you to write music and lyrics?

Stevo: For me it’s the passion for music and the love of creating riffs, melodies. If I manage to write a piece of music that gives myself goosebumps, it gives me a lot of pleasure. If others enjoy my music too, it makes me feel very happy.

Which is the motivation of Godsnake? What keeps you going?

Stevo: We are very passionate about what we do. We care a lot about our music, and we want to be able to present ourselves to a bigger audience. If this band has the potential to get some decent recognition in the metal Scene, we want to do our part in delivering our craft in the best possible way.

How do you make decisions as a band?

Stevo: Usually collectively. For instance, during the pandemic we get together regularly via video calls to discuss and agree on different things. During the song writing process this can be a little tough though. So here we usually have a smaller team that finetunes the music. Nevertheless we rehearse the songs together and only consider a song ‘finished’ once everyone signs off on it.

How difficult is it for a newcomer band to get distinguished from the rest and to have a personal sound?

Stevo: I feel this is THE biggest challenge. When you are a newcomer band, everyone starts labeling you and compares you to other bands that you apparently sound similar like. Sometimes it feels, that if you can’t bring a very unique sound or style, you won’t get much recognition. But you can’t always reinvent the wheel, and in my opinion you also don’t have to. As long as your music is well-made and isn’t a copy of something else, it’s cool. But nowadays there is so much new music out on the market and it’s difficult to get through to those who might really dig your stuff. Our label is doing a good job in promoting us properly, but it’s certainly not easy as a newcomer.

How much important are live concerts for Godsnake? How would you describe a Godsnake live show?

Stevo: Playing live is a very important aspect for us. We all enjoy playing live and making the connection to the audience. We always try to bring it and perform to the best of our abilities. There’s usually a good vibe with a high energy level in the room. It’s about everyone having a good time, whether up on stage or in the pit!

How has the Covid-19 pandemic affected you, personally and as a band?

Stevo: I personally feel like locked up in a big cage. For the band this is a major stumbling stone. Our album was released during the pandemic, and we are not able to go out and promote it properly.  We would want to go out there and earn the respect and recognition of each and every metalhead, and through playing live slowly increase our presence within the scene. Unfortunately none of that is able to happen at the moment which sucks big time!

You are in Massacre Records. How did you get into this label? Are you satisfied with your label?

Stevo: We submitted our application and they came back offering us a deal. It was really that simple. The offer was good, we instantly felt in good hands. The cooperation has been very easy going and we are very happy to be a part of the Massacre Records family.

Which are your future plans? A wish for the new year 2021?

Stevo: I hope that this fuckin’ pandemic blows over fast. Our intention is to hopefully enter the studio again towards the end of 2021 to record the follow up record to ‘Poison Thorn’. We will use the downtime to be creative and hopefully put together some crushing songs. We have been really happy with the success of “Poison Thorn” so far. We hope this will continue in 2021 and the record gets some more attention. If you like our music, please give us your support and help spread the word. We hope to be able to come your way soon and play live for some hungry metalheads again. 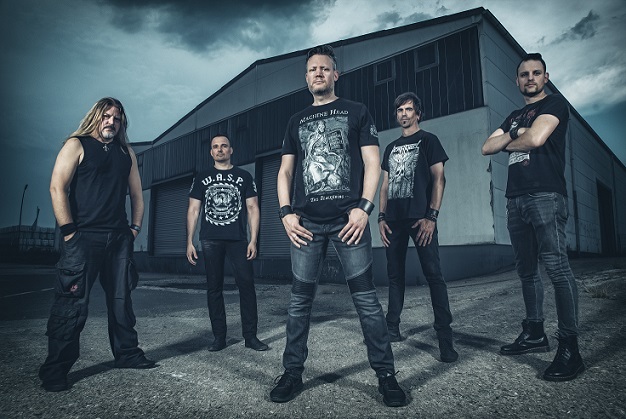